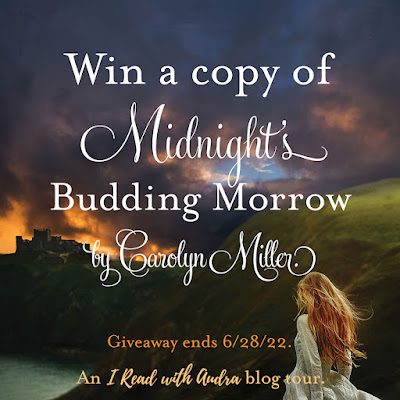 Enter to win at the end of this post!
For the next few weeks, my team of bloggers will be featuring Midnight's Budding Morrow by Carolyn Miller, the second book in the Regency Wallflowers series.
Learn more about the book below -- you can even read an excerpt -- and at the end of the post, enter to win a copy of your own. 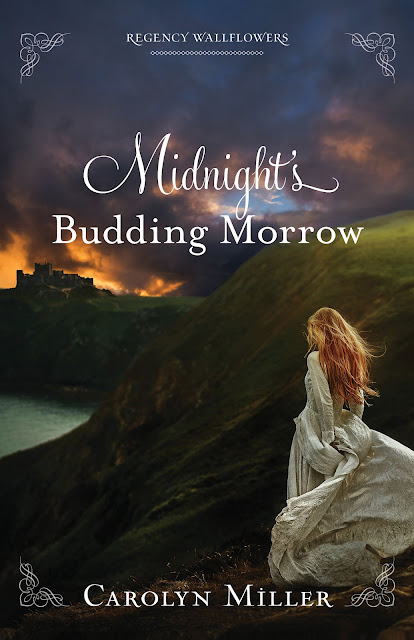 Can real love grow between a wallflower and an unrepentant rogue?

Sarah Drayton is eager to spend time with her best friend at her crumbling Northumberland castle estate. Matrimony is the last thing on her mind and the last thing she expects to be faced with on a holiday. Yet she finds herself being inveigled into a marriage of convenience with her friend's rakish brother.

When James Langley returns to his family's estate, he can't be bothered to pay attention to his responsibilities as the heir. War is raging and he wants only distraction, not serious tethers. But his roguish ways have backed him into a corner, and he has little choice but to obey his father's stunning decree: marry before returning to war, or else. Suddenly he finds himself wedded to a clever and capable woman he does not love.

Sarah craves love and a place to belong, neither of which James offered before returning to the battlefront. Now everyone around her thinks she married above her station, and they have no intention of rewarding her for such impertinence. It isn't until her husband returns from war seemingly changed that she begins to hope they may find real happiness. But can she trust that this rake has truly reformed?

When tragedy strikes, this pair must learn to trust God and his plans. Will they be destroyed . . . or will they discover that even in the darkest depths of night, the morning still holds hope?

Miller’s novels have won a number of RWA and ACFW contests. She is a member of American Christian Fiction Writers and Australasian Christian Writers.

While most stories set in Regency England focus on the rich, the young, and the beautiful, award-winning author Carolyn Miller decided she wanted to give readers something different for a change. Her new Regency Wallflowers series follows the commoners, away from the hustle and bustle of 1810s London, out in the Lake District of England. She tells the stories of women who are slightly older and have few prospects for marriage, women who might be considered “wallflowers.”

Midnight’s Budding Morrow is the second book in the Regency Wallflowers series. Dusk’s Darkest Shores is the first book in the series. 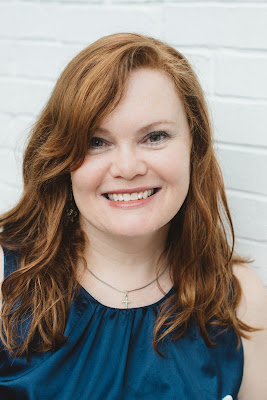 Carolyn Miller is an inspirational romance author who lives in the beautiful Southern Highlands of New South Wales, Australia, with her husband and four children.

A longtime lover of romance, especially that of Jane Austen and Georgette Heyer’s Regency era, Carolyn holds a BA in English literature and loves drawing readers into fictional worlds that show the truth of God’s grace in our lives. She enjoys music, films, gardens, art, travel, and food.

Elizabeth Litton said…
I've read a few of Carolyn's books. I love the Hawthorne House series by Kristi Ann Hunter.
June 4, 2022 at 8:21 AM

Linda Horin said…
I have read other books by Carolyn. My favorite regency book is Winning Miss Winthrop.
June 16, 2022 at 3:32 AM

Jeanette Davis said…
I have not read any of your books but look forward to. This one in particular sounds wonderful and the cover is amazing!!

Rochelle said…
The Dishonorable Miss DeLancey is my favorite of Carolyn Miller’s, so far. I’ve been waiting to read her newest book.
June 16, 2022 at 8:53 AM

Connie Porter Saunders said…
I've read all of Carolyn's Regency books. Her first book, The Illusive Miss Allison hooked me!
June 16, 2022 at 9:14 AM

Lauraine said…
L really enjoy reading Regency romances and have been a Georgette Heyer collector and avid reader since I was in high school. I have read several of Carolyn's books and they have the same "flavor." I want to read more, but my budget only allows one or two books every couple of months. I am still catching up!
June 16, 2022 at 12:50 PM

Alicia Haney said…
This is a great sounding book and the cover is Beautiful! Have a great day and a great rest of the week. aliciabhaney(at)sbcglobal(dot)net
June 16, 2022 at 1:02 PM

Anonymous said…
This will be the first book that I have read by this author, I think. I cannot wait to read this book! The cover itself makes me want to read it as soon as possible!
Janice
pjrcmoore@windstream.net
June 16, 2022 at 2:40 PM

Shannon Kraus said…
Carolyn Miller is a new author to me and I can't wait to red her books! My family is from England and I LOVE all things English!
June 19, 2022 at 7:09 AM