Showing posts from February, 2015
Show all

It was beautiful for the two hours it lasted 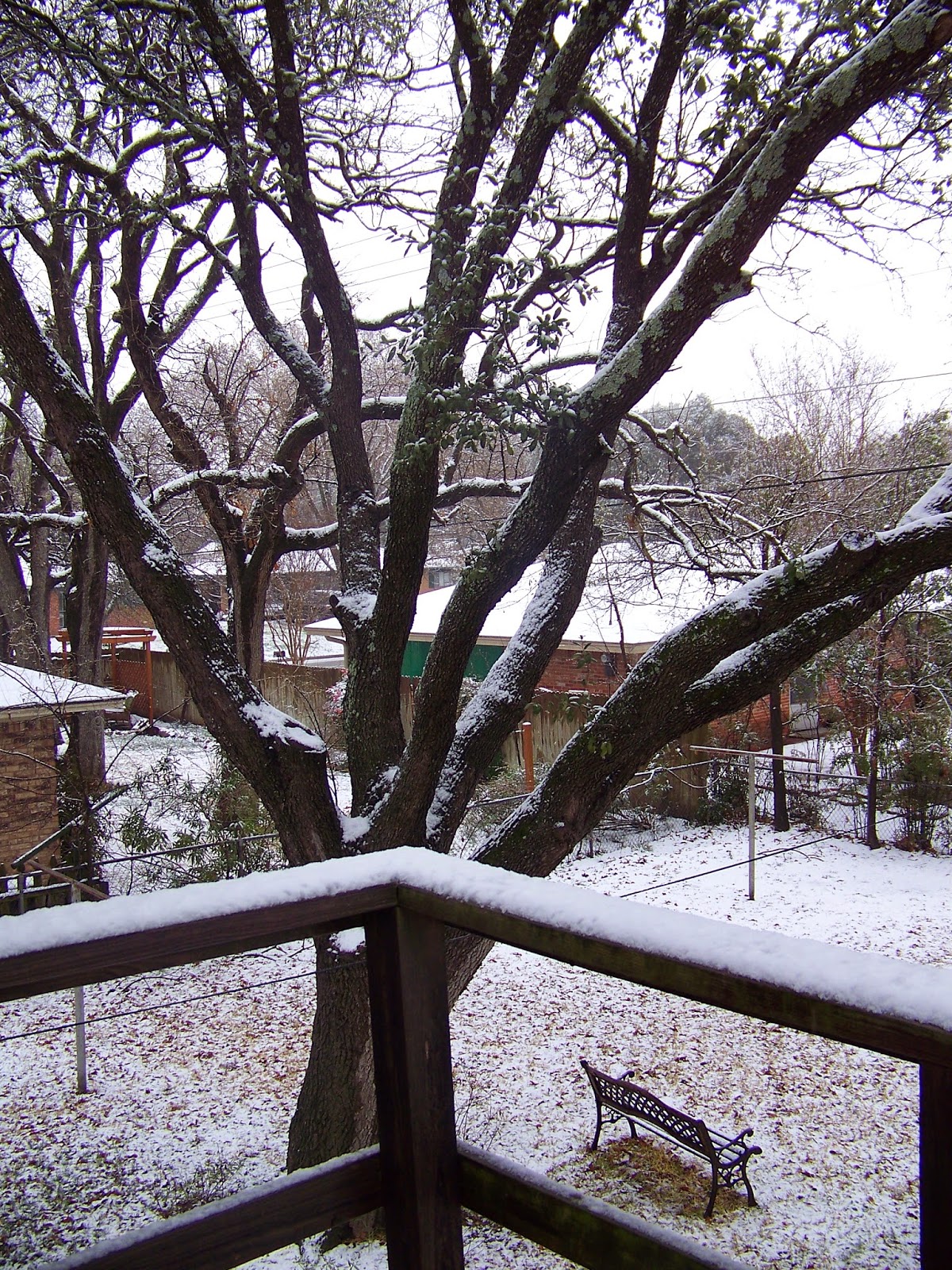 It's been really cold and wet all week. While less than an hour away the roads have been an icy mess, and some places have had inches of snow accumulation, this right here is as much snow as we got here where I live. Wednesday morning, big fluffy flakes beautifully down and coated everything. Then, two hours later it was all melted away. I was giddy while it lasted. Then, sad it didn't last longer when all that was left was big muddy puddles.
Post a Comment
Read more 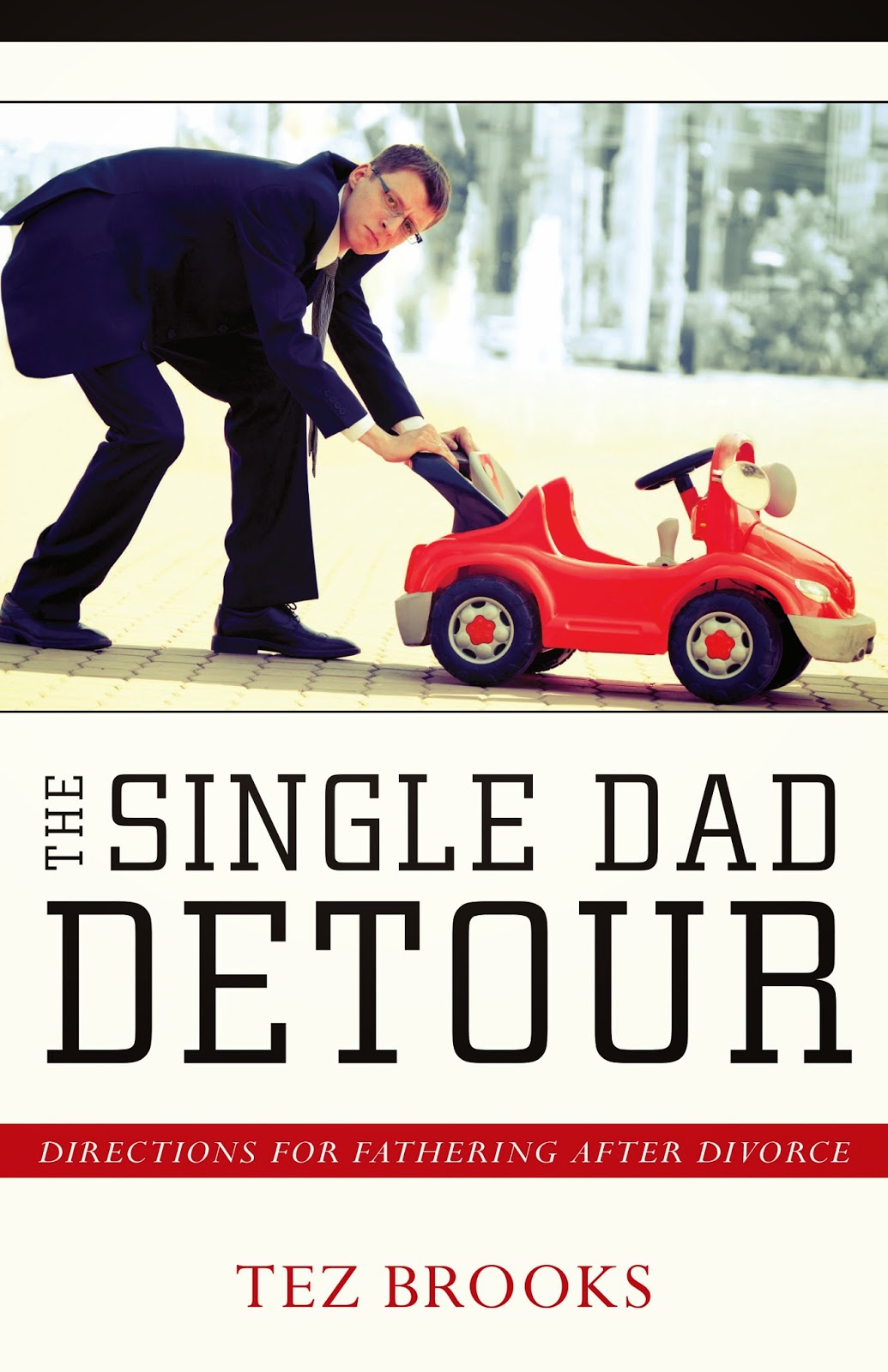 Book offers encouragement and advice to dads detoured by the pain of divorce The saying used to be “father knows best,” but with changing cultural tides, a man’s role in the family has been greatly diminished — especially when it comes to single dads. The divorced father is often portrayed in movies and television as an object of humor, ridicule or pity. Where does that leave real single dads trying to do their best? It can easily make them susceptible to overcompensation or apathy, which is why Tez Brooks has written The Single Dad Detour: Directions for Fathering After Divorce (Kregel/February 27, 2015/ISBN: 978-0825443602/$14.99) . Brooks understands how modern single fathers feel all too well. “Divorce was not something my family did, but you can’t make someone love you, and you can’t make someone stay. So although I didn't want a failed marriage, I found myself single again. It was a lonely time for me, but I ran to the Lord to survive,” he explains. The Si
Post a Comment
Read more

Putting an arm around teen moms 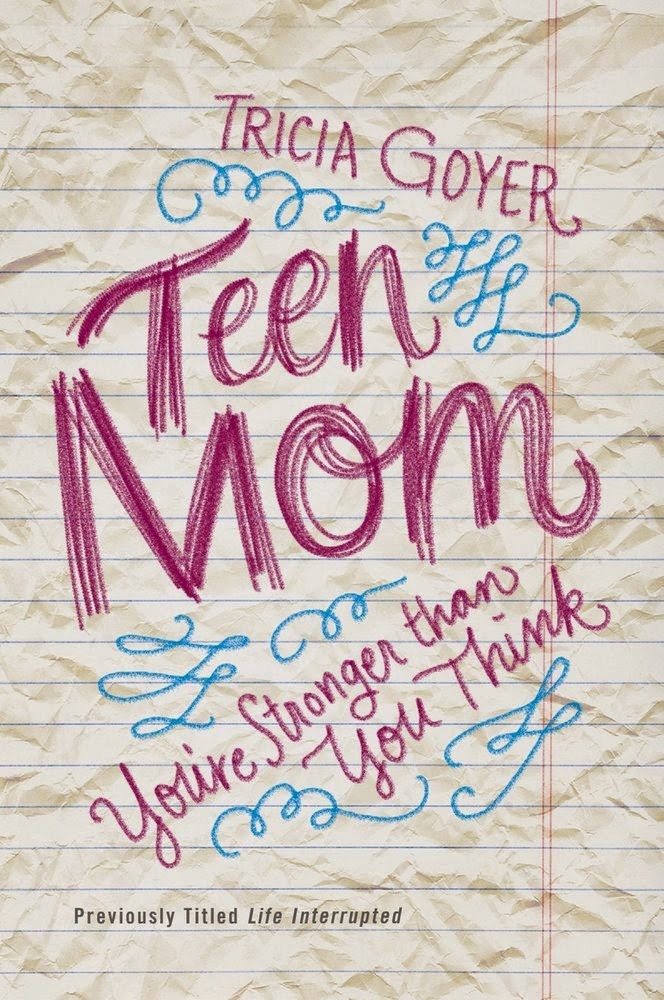 Tricia Goyer fills new book with encouragement and help based on personal experience According to the National Center for Health Statistics, more than a quarter of a million babies are born to teen moms in the U.S. each year. Best-selling author Tricia Goyer has written Teen Mom: You’re Stronger than You Think (Zondervan/March 3, 2015/ISBN: 978-0310338871/$15.99) because she doesn’t want one of them to fall through the cracks of the culture. Everything changes the day these young girls discover they’re going to be moms, and the pressures they’re under can be crushing. The National Campaign to Prevent Teen and Unplanned Pregnancy reports teen moms are more likely to drop out of high school and nearly half of them live below the poverty line. Tricia Goyer understands. Born to a single mom, Tricia found herself pregnant at 17, and she remembers what it felt like to carry the weight of the world on her shoulders. “My boyfriend was out of the picture, and I faced raising
Post a Comment
Read more

Author encourages special needs parents to get their joy back Part 1 of an interview with Laurie Wallin, Author of Get Your Joy Back Click here to read the full Q&A!   Some studies report as many as one out of every four families in the U.S. has a child with a special need. Parenting is stressful even when a child doesn’t have a physical, mental or emotional difficulty. One can imagine the stress on special needs families. Laurie Wallin meets these parents right where they are in her new book, Get Your Joy Back: Banishing Resentment and Reclaiming Confidence in Your Special Needs Family (Kregel Publications/January 27, 2015/ISBN: 978-0825443398/$13.99) . Wallin strives every day to live out her message for families: that no matter the challenge, in Jesus they can have joy and confidence. Get Your Joy Back is full of biblical insights and practical strategies to help parents recognize and shed the resentments that leave them spiritually, emotionally and socially drained. Wallin sugar-coats nothing but addresses issues with ho
Post a Comment
Read more

Saddle up for a new romance from novelist Debra Clopton ,  Betting on Hope !  In Wishing Springs, Maggie finds what she has always been looking for: a community and a home. But when her past catches up to her, it threatens everything, even the tender hope that this town holds all of her heart’s desires. Enter to win a Kindle Fire HD 6 to celebrate the release of Betting on Hope !    One grand prize winner will receive: A Kindle Fire A copy of  Betting on Hope Enter today by clicking the icon below. But hurry, the giveaway ends on March 8th.  Winner will be announced March 9th on Debra's blog . {NOT ON FACEBOOK? ENTER HERE .} {MORE ABOUT  BETTING ON HOPE } (Thomas Nelson, February 2015) A bet gone wrong. A small town’s meddling. And a cowboy intent on saving his ranch. Maggie Hope is an advice columnist whose background leaves her with little advice to give . . . and it’s beginning to show. When Maggie fills in at an interview with champion horse
Post a Comment
Read more

February 23, 2015
Tonight, we actually arrive in a beautiful place to fall in love. (They would say that about a garbage dump, I think.) Bali. No desert. No dirt. No brown water. Ocean and palm trees and lush tropical scenery. The most exotic place Farmer Boy has ever been too. The resort is definitely much more elaborate than the hotel back in Des Moines. It's down to the final three: Kaitlyn, Whitney and Becca. He claims to be falling in love with all three. I admit: I am team Becca. I don't get Kaitlyn as a choice. If it weren't for her voice, I could handle Whitney. First up on a date: Kaitlyn Will they be able to have a serious conversation? After greeting one another with a kiss, there will be no more of that once they enter the temple. Hallelujah! Unless you are just looking for the best kisser, we need more than that. Inside the temple, they try to carry baskets on their heads like the native women. They meditate and make their offerings before heading off t
Post a Comment
Read more 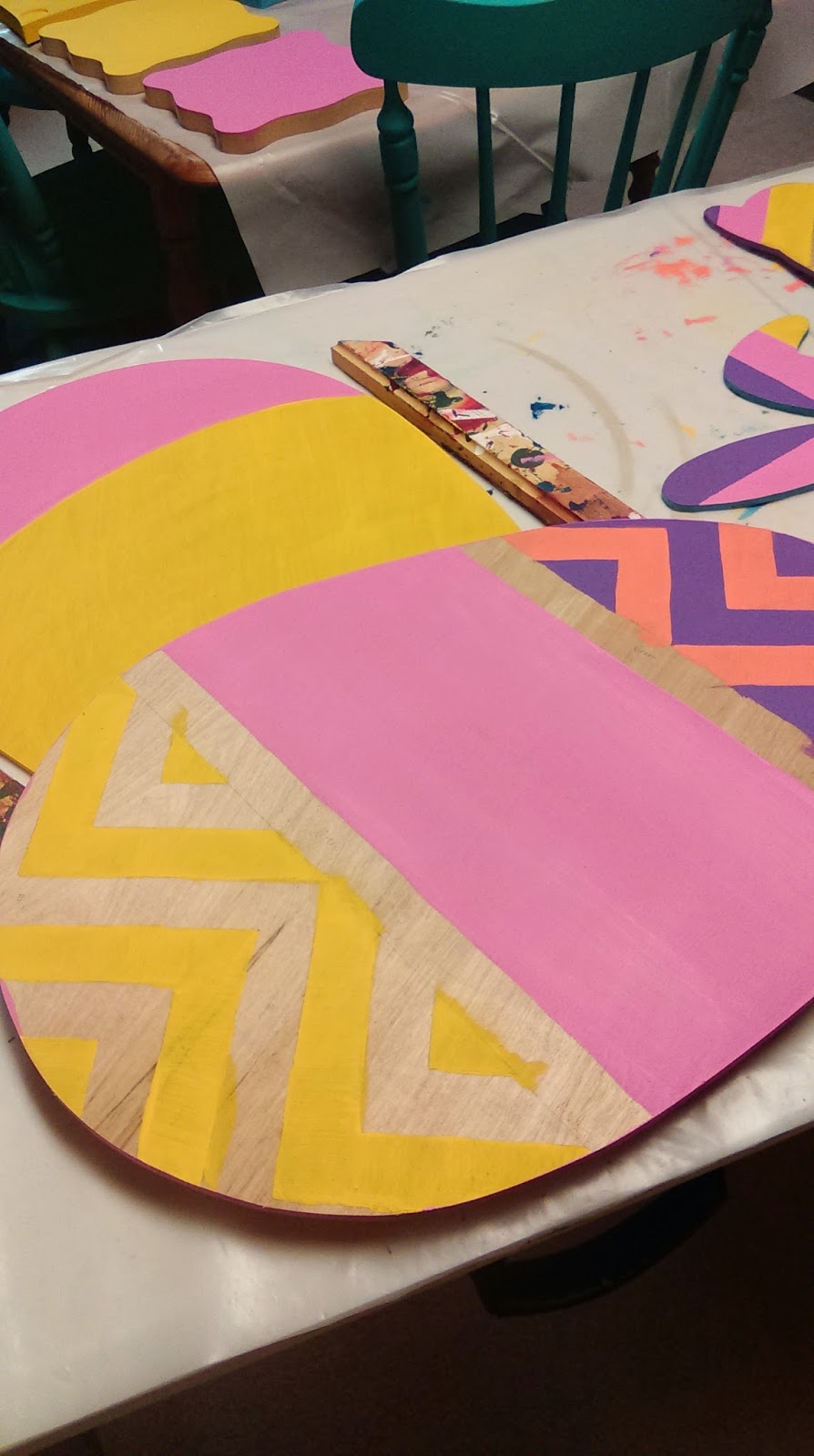 So it looks like the Easter bunny exploded over here! It's not all Easter decorations, but I can't wait until I get some things finished so I can post what I've been working on this weekend! I have so many things started! Then, I'll have to get posts up over at The Crafty Dad and Daughter !
Post a Comment
Read more

Who’s in charge of your family: you or Jesus? 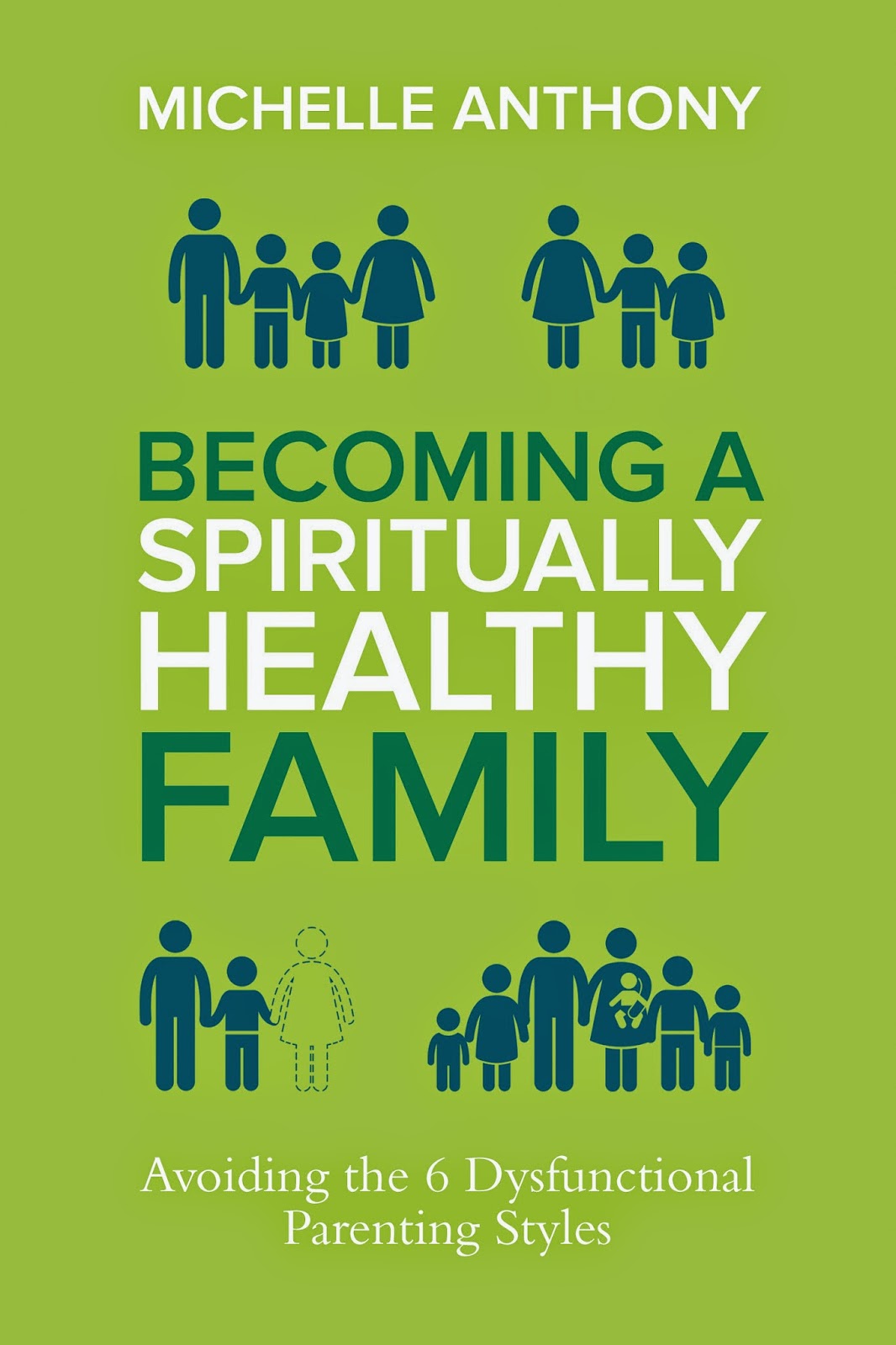 Part 2 of an interview with Michelle Anthony, Author of Becoming a Spiritually Healthy Family (Click here for the full interview.) We all want to guide our children into the abundant life that Jesus offers. But when we pursue the more and better that the world offers above our pursuit of Jesus, we fall into dangerous parenting habits. In Becoming a Spiritually Healthy Family: Avoiding the 6 Dysfunctional Parenting Styles (David C Cook/January 1, 2015/ISBN: 978-0781411394/$15.99) , Dr. Michelle Anthony unpacks six common dysfunctional parenting styles that we fall into out of habit, lack of attention, or just oversight due to busyness. If you long to show your children Jesus but don’t know how to do it, you’ll find hope in this practical guide to creating a relentlessly grace-filled home that is focus on God as first in charge. Becoming a Spiritually Healthy Family was made for that “freak-out” moment nearly all parents have when they realize their child’s view of
Post a Comment
Read more

Sometimes you just have to get out of the house

I need to get out of the house in the worst way. Working and living in the same place will do that to you. I kid you not, I went to Home Depot after work on Tuesday just to get out of the house. Tonight, I went to the grocery store. I hate going to the grocery store. Actually, I went to the grocery store because the fridge was empty, and I didn't have any cereal. It's a good thing I got cereal because when I got home, I decided I didn't buy a single thing I cared to fix tonight to eat. To share more boring details of my life, the bananas were too green to eat tonight. I always buy the the greenest bananas I can find at the store because I can't stand bananas once they start to spot. However, when I bought the bananas, I didn't plan on eating them tonight. A reason to get out of the house is a big reason why I am addicted to Sonic and Route 44s... just a reason to get out. To drive my car that I'm making payments on that hasn't left its spot in th
Post a Comment
Read more

In Terri Blackstock’s third and final book in her Moonlighters series, Twisted Innocence , readers are in for a story of suspense and redemption.  Dangers old and new threaten Holly and her baby, and lives are demanded as sacrifices for love. Through a complex web of mistakes and regret, redemption is the one hope Holly has left to hold on to. Celebrate the series' final release by entering Terri's Nook giveaway! One grand prize winner will receive: A Nook GlowLight The entire Moonlighters series Enter today by clicking the icon below. But hurry, the giveaway ends on March 8th.  Winner will be announced March 9th on the Litfuse blog . {NOT ON FACEBOOK? ENTER HERE .} {MORE ABOUT  TWISTED INNOCENCE } (Zondervan, February 2015) Holly Cramer’s past choices have finally caught up to her, but she never expected them to endanger her baby. Though Holly’s stumbled through most of her adult life as a party girl, she longs to live a more stable
Post a Comment
Read more

Because I got home in middle of "Chris Tells All" on Sunday night, I decided to make a special post tonight over his confessions about his experiences up to this point. I just didn't get all the blog put together on Sunday, and I might as well use it as more material. The thing about "Tell Alls" is that there is always a let down. "Lots of never befores" and "ever befores." First up is a set down with Kelsey. Will we need to get out our dictionaries and thesauruses? Nah, she'll use lots of big word synonyms in the same sentence, so we should be able to figure it out. The show even created a graphic for it. She plays off being one of the most controversial women in the house. She doesn't think she was condescending. It takes her a minute before she can gather herself enough to say that no, she doesn't think she's smarter than everyone else in the house. Kelsey is definitely different than everyone else there, and
Post a Comment
Read more
More posts