Because I got home in middle of "Chris Tells All" on Sunday night, I decided to make a special post tonight over his confessions about his experiences up to this point.

I just didn't get all the blog put together on Sunday, and I might as well use it as more material.

The thing about "Tell Alls" is that there is always a let down. "Lots of never befores" and "ever befores."

First up is a set down with Kelsey. Will we need to get out our dictionaries and thesauruses? Nah, she'll use lots of big word synonyms in the same sentence, so we should be able to figure it out. The show even created a graphic for it. 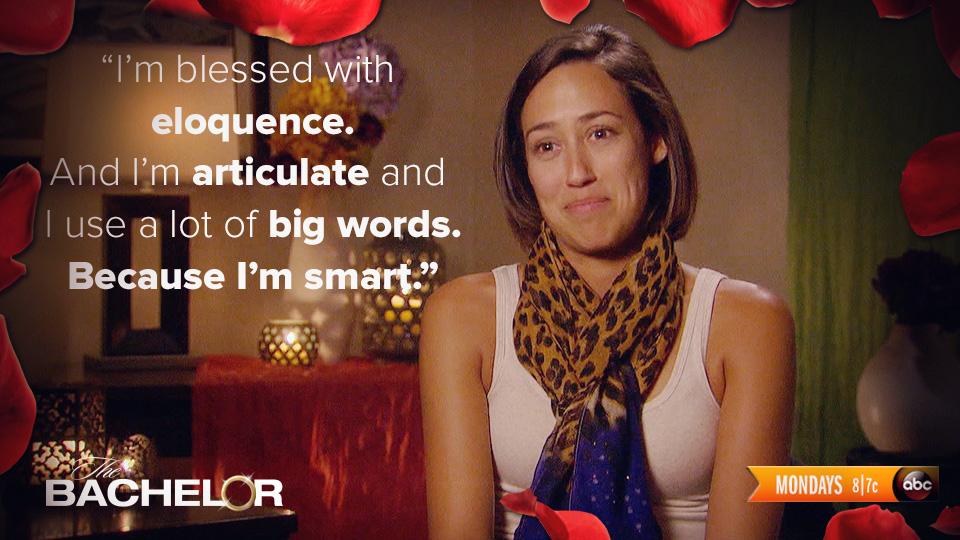 Kelsey is definitely different than everyone else there, and that's not necessarily a good thing. She had no control over her motor movements when she had her fainting spell. As a mental health professional, she knew what panic attacks were although she had never experienced one before. She is so prim in her every gesture.

Kelsey shall ever wonder if the seed was planted by Ash Kardash that rooted doubt in Chris' mind. And she's a little worried about seeing the rest of the women on the Women Tell All.

Next up, Prince Farming himself gets to tell why the Badlands were so bad. He claims he did not expect to hear that Kelsey was fake. He wanted to get straight to the bottom of the story and wasn't thinking about how the two would interact with each other after the revelation. Admittedly, he doesn't know much about female interaction. He was hoping it wouldn't get so dramatic.

Here's the deal -- he knew at least one of them was going home before the two-on-one date started. That's the nature of the date.

Next on the list to talk about is what Chris thought about crazy Ashley. He realized it was full on crazy on the Zombie paintball date. He said it was scary for her to have a weapon.

Behind the scenes, Ashley would wander the grounds at night and was convinced there was a betting ring after seeing the accounting office. Her audition tape was very normal and would not have predicted her craziness on the actual show.

The conversation turns to Tara the Drunk. Then, to Jordan the Drunk. Chris confesses that he didn't expect so much angst when he talked to Jordan upon her return. He just doesn't get much interaction out there on the farm not not realize that was going to be an unpopular choice with the women.

Oh, then there was Jillian. Harrison asked if Chris liked Jillian or the short shorts. As a man, Farmer was not opposed to the revealing clothes, he admits. Harrison talks about the black bar that followed her around. I was so glad for her - and it - to go. Although she started off as one of Chris' top 3, he realized that Jillian was not the one. The inappropriate questions during their one-on-one date proved the chemistry was not there.

Briefly, they talk about how "difficult" it was to let Juelia go after hearing her story about her husband who had committed suicide. I realize now how over used "difficult" is on the show.

The awkwardness of the date with Carly and the love guru. The uncomfortable twists...

The donkey gone wild on Becca's date that we didn't see.

All things Britt and how they were instantly connected with a hot and heavy kiss on the first night. How all the other girls got mad about him kissing Britt so publicly in South Dakota...

What exactly is being told here we didn't already know?


Chris Harrison also sits down with Andi Dorfman. Seems her love story with Josh came to an abrupt end. It was kind of awkward the night of the premiere, you know.

Andi starts crying as soon as Chris asks her the first question about how she is doing. Obviously, as she tries to keep the snot from flowing that obviously she's not doing well.

Andi says there was nothing official regarding the end of their engagement prior to that red carpet appearance. They had been struggling for a while with their relationship.

To rub salt in the wounds even more, Harrison takes her back to the day they got engaged. At the time, Andi was 100% sure of her decision. However, as time went on, they never did set a wedding date.

Andi didn't feel supported and empowered, and at the same time, she doesn't think she provided that for Josh either. She's never experienced love like that -- and her first real heartbreak. I think there's something she's not saying.

All said... not really worth the extra hour of watching time this week. If you missed it, you didn't miss anything.
Andi Dorfman Chris Harrison Chris Soules Iowa The Bachelor