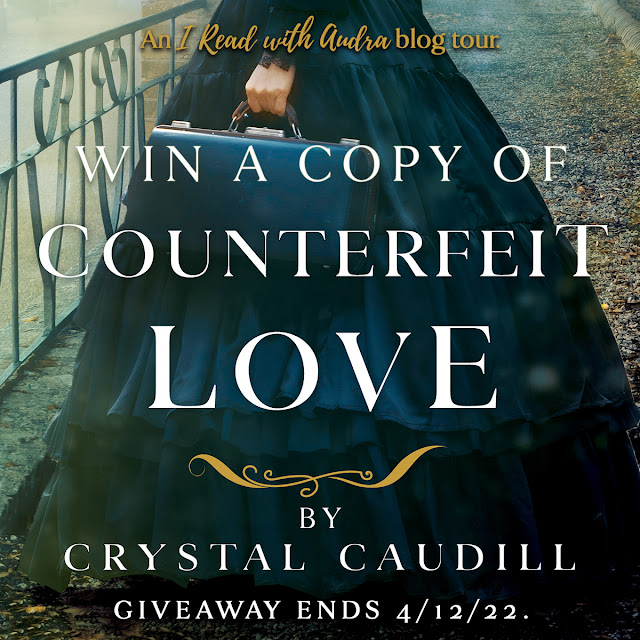 Enter to win at the end of this post!

For the next few weeks, my blog tour team will be reviewing Counterfeit Love by Crystal Caudill.
When you hear the words “Secret Service,” what do you think? The men in suits strategically spaced around the President of the United States, right? Did you know that the original purpose of the Secret Service was to catch counterfeiters and thwart their schemes to make money at the cost of the nation’s economy? It would be more than three decades before the agency would protect their first president. When author Crystal Caudill first read a story and learned that fact, she became hooked on the fascinating history of the Secret Service. In fact, that fascination became the inspiration for her debut novel, Counterfeit Love (Kregel Publications/March 15, 2022), and she hopes her readers are lured in by the history as well. 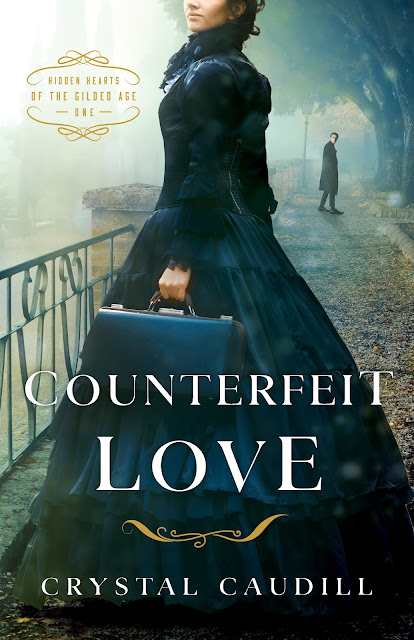 Can this undercover agent save the woman he loves—or is her heart as counterfeit as the money he’s been sent to track down?

After all that Grandfather has sacrificed to raise her, Theresa Plane owes it to him to save the family name--and that means clearing their debt with creditors before she marries Edward Greystone. But when one of the creditors’ threats leads her to stumble across a midnight meeting, she discovers that the money he owes isn’t all Grandfather was hiding. And the secrets he kept have now trapped Theresa in a life-threatening fight for her home--and the truth.

After months of undercover work, Secret Service operative Broderick Cosgrove is finally about to uncover the identity of the leader of a notorious counterfeiting ring. That moment of triumph turns to horror, however, when he finds undeniable proof that his former fiancé is connected. Can he really believe the woman he loved is a willing participant? Protecting Theresa and proving her innocence may destroy his career--but that’s better than failing her twice in one lifetime.

They must form a partnership, tentative though it is. But there’s no question they’re both still keeping secrets--and that lack of trust, along with the dangerous criminals out for their blood, threatens their hearts, their faith, and their very survival.

To read an excerpt of Counterfeit Love click here. 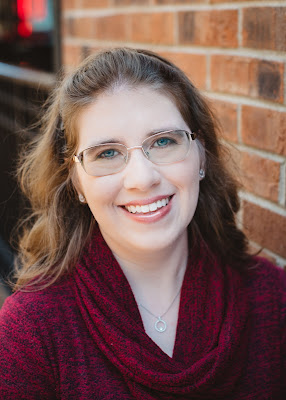 Crystal Caudill is the author of “dangerously good historical romance,” with her work garnering awards from Romance Writers of America and ACFW. Counterfeit Love is her debut published novel.

Caudill says that reading and writing are part of her soul and have been since she first held a crayon. While she considered writing to be an escape from challenges and struggles and a way to keep her sanity, Caudill would come to recognize that God used it as a teaching tool. “The stories came through my fingertips, but they were marked with His fingerprints,” she shares.

As she delved into history and crafted her own stories of hope through danger, Caudill would answer the call to pursue writing as a career after her first writer’s conference. “My stories are still filled with danger, struggle, and history, but they are also permeated with the hope and love of Christ. I hope they are dangerously good. Good for the heart and for the soul.”

She is a stay-at-home mom and caregiver, and when she isn’t writing, Caudill can be found playing board games with her family, drinking hot tea, or reading other great books at her home outside Cincinnati, Ohio.

Library Lady said…
I volunteer in the church library and have for 43 years.
If I win, Crystal's book, "Counterfeit Love", it will
be going to the library, so that, others may enjoy it too.

Pam said…
This sounds like a great book. It's fun to learn about new authors.

Emilee Douglas said…
Sounds great! I haven’t read any historicals set in Cincinnati.
April 2, 2022 at 7:24 AM

vs2hhsnu72 said…
Although there are lots of|there are many} hobbies out there, you can’t play them every time. This is end result of|as a result of} some games are costly hence you 퍼스트카지노 can’t play them on a regular basis}. Sports betting are an inexpensive pastime you can to|you probably can} play anytime, any day. Also, you can to|you probably can} choose to both wager on-line or via land-based casinos, or still get the advantages the video games offer.
January 20, 2023 at 7:25 PM