The Spirit of Texas 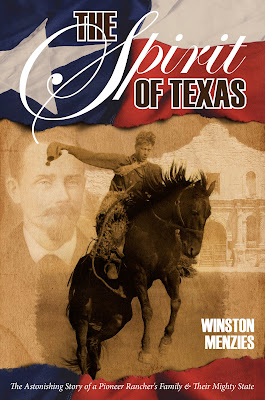 In June of 1876, a young carpenter arrived in Galveston with nothing more than a chest of tools and a desire to find work in the burgeoning seaport city. His name was William Menzies. He was 21 years old, fiercely independent and determined to make his way in the world. Galveston was clearly not where his future would lie, however, and a combination of storms, floods, a fire and a lack of work soon drove him inland. A decade later, having broken countless horses as a horse trader to earn his keep in the interim, the young man finally found himself on the banks of the San Saba River in Menard County. It was here he decided to buy a couple of sections of land to set roots and stay.

And there on the banks of the San Saba those roots reached deep and took hold. So deep, in fact, that in 1957, some 80 years after he’d first arrived in Galveston, the Texas State Legislature recognized William as one of the state’s pioneer ranchers and a leader in the area of progressive agriculture.

The Spirit of Texas: The Astonishing Story of a Pioneer Rancher’s Family and Their Mighty State (Creative Publishing Company) is William’s story as chronicled by his great-grandson, Winston Menzies, a pastor and writer now living in Georgia. Crafted from his own memories as well as those of friends and relatives, Menzies does not hesitate to weave local and state history, politics and culture into his family’s story. In so doing, he exposes the bones of Texas’ romance and lore, revealing the raw passion and determination of the men and women who went there seeking independence and reminding the reader of the indelible mark they left behind. “The Spirit of Texas is more than just the story of William Menzies; it’s the story of the pioneers who first settled the land and made Texas what it is today,” Winston says. “In researching for this book, I found no other book that tells the story of Texas through the stories of its people.”

In telling his great-grandfather’s story, the author throws open the door to the Menzies’ family home and welcomes us in. It is here we meet Letha Ann, the woman who became William’s wife and the matriarch of the Menzies clan. With love and care, the author introduces us to this remarkable woman who devoted her life to being William’s helpmate, bearing his eight children and instilling in each the same pioneering spirit and unshakeable faith that was the hallmark of the Menzies name. A living complement to her husband, Letha Ann’s own story is one of courage, faith and unflinching dedication.

Along with the Menzies’ sons and daughters, neighbors and friends, we are also introduced to a host of other ordinary folk who persisted in living extraordinary lives in order to forge a place for themselves in the raw Texas landscape. Folks like Willie Roberts, the first white child born in Menard County who, even though stricken with polio while still a toddler, managed to defy unimaginable odds to live a rich, full life on his own terms. Folks like Dr. Ed Knipling who grew up on his father’s Port Lavaca farm and experienced firsthand the devastation to livestock wrought by a deadly pest: the screwworm fly. It was Knipling who determined that through the release of sterilized male flies the problem might be eradicated. His ability to look past the problem to see the solution brought a successful end to the damage done by the screwworm fly and was, at the time, labeled the “greatest entomological achievement of the 20th century” by the U.S. Secretary of Agriculture.

While The Spirit of Texas is clearly the story of William Menzies and his legacy, it is also the story of all the pioneers who settled throughout Texas, carving out their own legacies in an unforgiving land. It is a story that should be read by anyone wanting to know Texas and Texans better. It is also a story that those who already know and love the state and its people may thoroughly embrace and enjoy.