September 07, 2018
I've been going nuts the past several weeks wanting new desks for my office. I had four pieces of furniture making up an L-shaped desk, and none of the surfaces were even.

I looked at local stores, I went to Ikea, I looked on Amazon and all sorts of other online places. I looked so much every ad I saw on Facebook and otherwise pointed to desks.

I have had a hard time working and reaching for the right mouse because I've had too many things going on. I finally just went for it and bought TWO L-shaped desks.

After a couple of really late nights (after long work days), I got them put together and hauled upstairs. What was actually spread across 5 pieces of furniture (because my printers were on a shelf behind me), is now all on a relatively level surface. The corners don't sit quite right, but in theory, it's one level.

I have a lamp in an odd place because it won't fit close to a wall with a high enough ceiling now. The light up here is terrible which is why my photo is so bad. 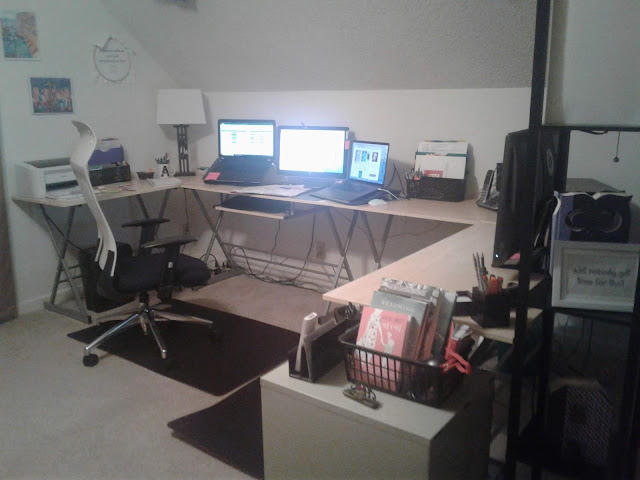 I can tell it will be better already, even though I didn't set up everything until after my work day. I'll have to get another floor mat because I'm going back to getting hung off the edge and tripping. It's pretty bad to be bruised from a floor mat. See how that corner is flipping up?