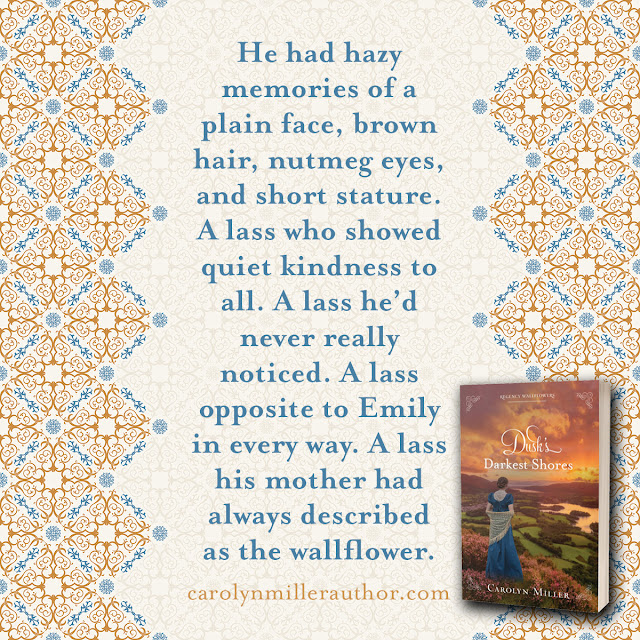 Part 1 of an Interview with Carolyn Miller,

While most stories set in Regency England focus on the rich, the young, and the beautiful, award-winning author Carolyn Miller decided she wanted to give readers something different for a change. Her new Regency Wallflowers series follows the commoners, away from the hustle and bustle of 1810s London, out in the Lake District of England. The new trilogy begins with Dusk’s Darkest Shores (Kregel Publications), which tells the story of a meek wallflower who finds herself helping a returning war hero whose dreams have been plunged into darkness.

Q: Please introduce us to your new Regency Wallflowers series, and specifically to your latest release, Dusk’s Darkest Shores.

After writing nine books in the Regency Brides trilogies, I wanted to focus on stories that were less about the rich, beautiful, and titled aristocracy and more about ordinary people. Specifically, I wanted to tell the stories of women who were slightly older and who were considered “wallflowers” or those with very few, if any, matrimonial prospects. I have found that Regency fiction is often populated by an amazing number of single, rich, young, and handsome dukes instead of these far more relatable women and situations. With the Napoleonic Wars having killed many young men in Regency times, it seems a fair assumption that not all women would have married, so I wanted this new series to focus a little more on what that would have been like, and the challenges a woman might have faced given these extremely limited circumstances.

For Mary Bloomfield, the heroine of Dusk’s Darkest Shores, she is crucially aware that her age and situation mean she is unlikely to wed. She helps her father, the local doctor, and is content with her lot in life, until Adam Edgerton, a local war hero, returns. He’s the victim of an insidious disease which has crippled his prospects. As Mary helps Adam fight to find a future, frustration and antipathy develop into friendship and esteem, then into something deeper. This story is set in England’s beautiful Lake District, and the setting as well as the social and medical challenges of that time make for fascinating reading—something I really enjoyed researching, and I’m sure readers will enjoy too.

Q: Tell us more about England’s Lake District in the 1810s. What was life like for women especially?

Like many places of this time, the Lake District in the north of England was suffering the effects of many of its men being involved in war, which severely impacted the small villages and rural farming communities. These sheep-tending communities saw the women take on roles that perhaps were not considered as usual when the men were around and able to fulfil their farming and regular duties.

For many women in this time period, their lives were certainly not focused on the latest fashions from London but rather on ensuring they had enough food to feed their families by whatever means possible. Families might grow some of their own food, but many women had to turn their hand to whatever they could to make ends meet. It was a hard life, a very practical life, with little room for whims and fancies, especially for those in the middle and lower classes. That is why village functions such as dances were considered the ultimate in entertainment. Women were often at the beck and call of their family and social obligations, with little room for indulging the softer emotions, let alone the luxury of falling in love. 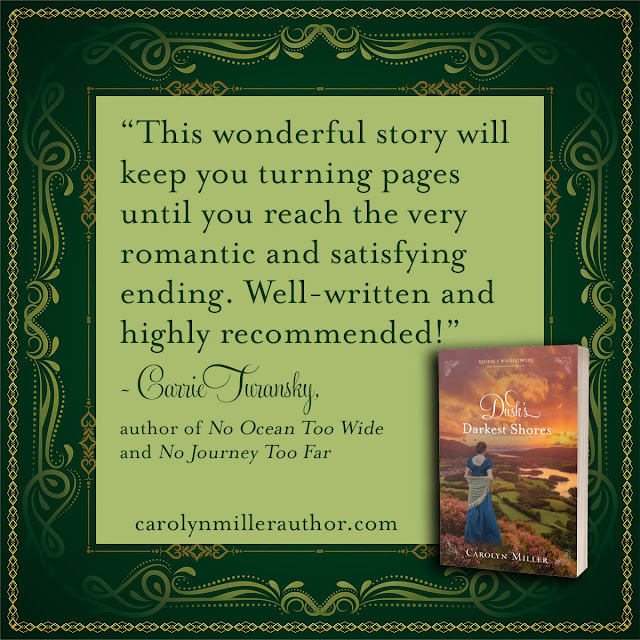 Q: Can you tell us more about your leading lady, Mary Bloomfield, who is quite self-sufficient and, in some ways, independent?

As the daughter of the local doctor, Mary Bloomfield is put into situations that many “proper” young women would never be exposed to. But as her practical, no-nonsense father values her commonsense and useful ways, she is placed in circumstances most unusual for a woman. This includes the preparation and mixing of medicines, as well as the care of patients that leads her to adopt far more independent conduct than most other women her age and younger.

Mary is naturally compassionate; her older age, steady temperament, and caring nature mean she is well respected in the community, allowing her some degree of leeway from the usual social expectations. Like Elizabeth Bennet, she is partial to an unchaperoned stroll, although Mary always has a purpose, such as visiting a sick neighbor, and usually has her basket on hand (filled with medicine or supplies).

Q: What are Mary’s views on marriage? Does being past “marriable age” bother her?

In Regency times, many women were thought to be “left on the shelf” if they remained unwed many years past twenty. Mary is wryly aware of her lack of marriageability, especially as she is older and is considered less attractive than other single ladies in the village. She has accepted her lot in life, is content, and has quite given up any notions of romance.

She does not allow this to bother her, instead busying herself in good works, helping her father with his work, visiting the sick in their community, and helping to care for them in the little cottage infirmary that is part of their house. She’d rather use her time for the benefit of others than wistfully daydream on what she knows can never be.

Q: The Bloomfield sisters at first appear to have many differences but are more alike in some ways than they would ever like to admit. Can you tell us a little bit about the sisters and how they butt heads?

Mary’s own mother died when she was very young, so when her father remarries and another daughter is born many years younger than Mary, it is not surprising that they don’t always see eye to eye. Joanna Bloomfield seems to be somewhat spoiled and focused on flirting and fashion. Mary is keen to encourage her sister to think of how her time could be spent more productively—which is not always well received. One of their chief challenges concerns how Joanna treats her would-be suitor, and they also clash over Joanna’s friend Emily and the advice Mary offers her when Emily’s injured sweetheart returns from war.

Deep down, Joanna has a moral compass almost as strong as Mary’s own, and she is equally candid in her assessment of what she perceives as Mary’s shortcomings. But she is also loyal and loving, and doesn’t hesitate to step beyond the realm of propriety to interfere when it seems as if Mary is about to lose it all. I enjoy writing stories about sisters, having a sister of my own and two daughters. It’s the ups and downs of such relationships that readers have responded to so well, especially in sister-based series such as Regency Brides: Daughters of Aynsley. I’m sure readers will connect warmly with these sisters in Dusk’s Darkest Shores, too. 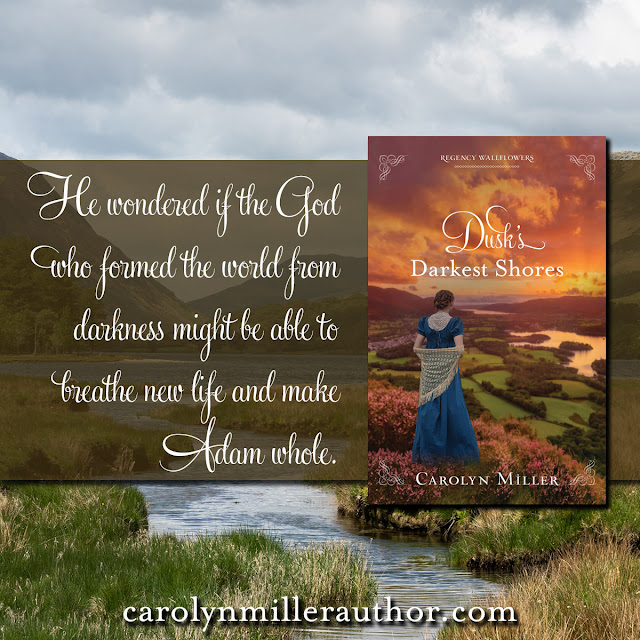 Q: What can readers expect as the Regency Wallflowers series continues? What else can your readers look forward to later this year?

I’ve really loved turning the focus from aristocratic foibles to those situations and people that are far more relatable. Next year sees the release of Midnight’s Budding Morrow, a Gothic-inspired romance set in a crumbling castle by the sea in Northumberland, which delves into matters of belonging, acceptance, and family. The following year sees the release of Dawn’s Untrodden Green, which sees a very different Regency wallflower encounter someone who may change her mind about marriage, in a book I consider to be one of my most humorous yet.

Later this year, I’m launching two more contemporary releases as part of the Independence Islands series, Regaining Mercy (about what happens when a failed reality TV star returns to her narrow-minded community) and Restoring Hope  (which asks whether opposites who attract can ever really last). Just in time for New Year’s, I have another contemporary romance releasing, The Break Up Project, the first in the Original Six series, set in Boston and involving a preschool teacher and a hockey player.

Lots of happy reading ahead!