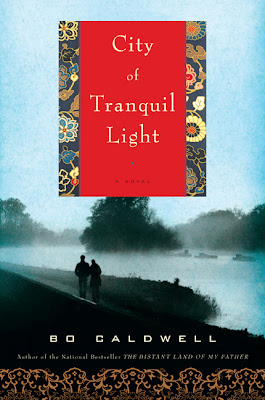 Author Bo Caldwell shares an inspired story
of a young couple whose marriage and faith
are put to the test in Revolutionary China
“Bo Caldwell arouses the hope, even the conviction,
that beyond darkness of all kinds lies a heavenly city—
a city of tranquil light.” ~ The Christian Century
Bo Caldwell’s 2001 debut novel, The Distant Land of My Father, set in historic China and based on the story of her uncle, was a critical and commercial success—a national bestseller that was loved by critics, booksellers, and readers in equal measure. In 2002 Caldwell turned to the story of her maternal grandparents who were missionaries in China in the early 1900s. For years her mother had urged her to write about them and when she dove into the research she found their lives full of conflict, danger, and heartbreak, as well as joy and fulfillment. But life, in the form of a cancer diagnosis, kept her from her writing desk until 2006. When she returned, she completed City of Tranquil Light (Henry Holt and Company), a searing love story of a man and a woman, their God, and the country they jointly loved and a deeply researched and page-turning portrait of a country in utter turmoil.

At the center of the novel are Will and Katherine, two Mennonite missionaries from the heartland who have come to China because they feel called by God to serve the poor and spread the Good News. But this is more than a missionary story; it is really the portrait of a marriage set against the backdrop of a radically shifting nation that is plunging into revolution.


“City of Tranquil Light by Bo Caldwell is a wonderful novel
set in China in the early years of the 20th century....
Funny, exciting and heartbreakingly sad,
it showcases the power of the gospel.” ~ World Magazine
A novel based on her grandparents wasn’t Caldwell’s idea. “I’m embarrassed to say that before I had dismissed my grandparents’ lives as too dull and simplistic. But as I reread my grandfather’s memoir and began to ask my mom about my grandparents, I learned how wrong I’d been.” As she began to see her grandparents as her mother had seen them, and to read the biographies and autobiographies of other American missionaries in China, Caldwell found similar stories. “I saw a pattern emerge in the later lives of many of these men and women. Most eventually returned to the United States, usually to be near their children (now grown) and grandchildren, but also because of illness or frailty. I was moved by the contrast between their lives in China and their later lives in the U.S. After enduring decades of war, famine, illness, personal danger, and great hostility toward their work, these people settled safely in the suburbs where they walked in rose gardens and played with their grandchildren and lived out their days. I was struck by the sacrifice that must have been involved in leaving the people and work that had been at the center of their lives, even with the reward of the comforts of modern life. I also began to feel that missionaries often get a bad rap in fiction. While there were certainly those who exploited the people they had come to serve, there were also many who poured out their lives for strangers and for their faith. And I wanted to tell their story.”

That story is one of marriage, of leaving one home and finding another, and of faith. “When I began the novel, I tried to understand my grandfather’s faith and to present it accurately,” says Caldwell. “I tried to see the world through his eyes.” Once Caldwell returned to writing, she returned as a different person. The combination of sobriety and a serious illness had affected her faith deeply, and she was no longer writing about her grandparents’ faith. She was writing about her own.