Adventures in Odyssey rewards those impacting the lives of children 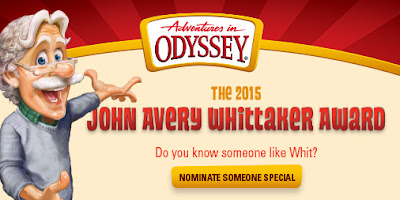 Most people can think of one or two figures whose love and life example had a great impact on the formation of their spiritual foundation. It might be a coach, a Sunday school teacher or a parent or grandparent. Whatever the role, it’s hard to put a value on the investment these people make on a daily basis. In an effort to bring honor to these countless, quiet heroes, Adventures in Odyssey announces the John Avery Whitaker Award. Named after Odyssey’s resident leader and the namesake of Odyssey’s most famous attraction, Whit’s End, the award will be bestowed annually on one deserving mentor.

Like the Adventures in Odyssey character John Avery Whitaker, or “Whit” as he’s known by fans of the show, the person should be someone who is passionate about innovatively teaching children the truths expressed in the Bible. Those who create Adventures in Odyssey know that while Whit might be a fictitious character, there are thousands of real people just like him. “Our hope is that by bringing those people into the light, others will be inspired to follow their example,” says Dave Arnold, the executive producer of Adventures in Odyssey. “If we can spur mature believers in Christ to mentor and influence a generation being barraged with messages of compromise, we can turn the tide and encourage revival in our youth.”

Nominations are being accepted now through October 31 for the “Whits” out there in the world. Beginning on November 1, one nominee will be selected daily and awarded with a prize package including Adventures in Odyssey's latest album, Taking the Plunge, and a DVD of the movie Beyond the Mask. One grand prize winner will be chosen and announced on November 20. This worthy recipient will receive more than $500 worth of Focus on the Family resources, including an Odyssey Adventure Club (OAC) membership. The OAC offers 24/7, on-the-go access to more than 800 episodes of Adventures in Odyssey, as well as a new, members-only episode every month. It is a safe, fun environment where the whole family can explore, create and imagine, all while learning biblical truth.

Nominations can be submitted via this form, or the information can be emailed to contest@whitsend.org. (See the Official Rules for all the details.)