About every last bit of Halloween spirit I have 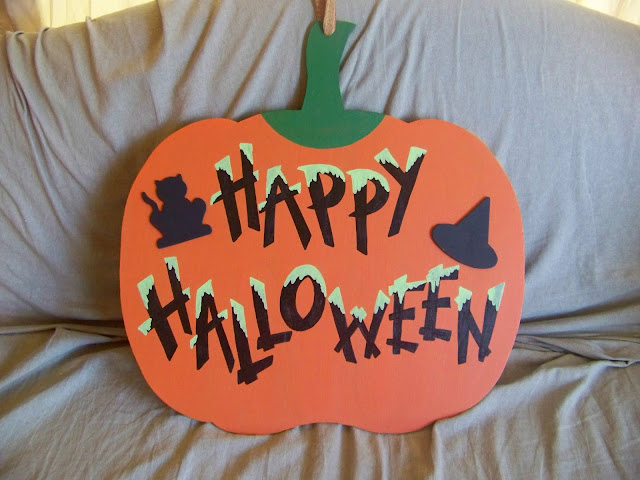 There. That's all the Halloween spirit I can put forth. What's do you call the Scrooge or Grinch of Halloween?

I had a few of these left, by the way, because I made more to have stock last weekend, then didn't get to do the event because of the flooding.

I'll just throw in that the festival still has not responded to me. The president of the chamber of commerce told me she thought all was great and that she spent $800 with the vendors that were there. That just really ticked me off. (She didn't get the point that many vendors didn't show up because they couldn't, not a as decision.)

Anyway, that's beside the point. I'm not a Halloween person. It's not some big religious objection. It's may be that as a kid, we maybe went trick or treating at 5 houses, and my mom only bought me one costume that I remember wearing in both kindergarten and first grade. Strawberry Shortcake.

Today, I went along with the fact Mom wanted to go over to Canton for First Monday Trade Days. I really did want to stay around home and finish some projects. Instead I did go and find some good deals on MDF shapes to use as patterns and some hanger hardware for product. I definitely did more walking than I've done in a while, so my hips ache.

As we got back into town, and turned onto my street, there were a lot of cars on the street (some you had to dodge for erratic driving) taking kids around to trick or treat. Most of which were not people who lived in the neighborhood. Maybe if kids just went around their neighborhood, I wouldn't care so much. I'm of the opinion if you're that hard up for candy that you take kids around by the trailer load to other parts of town, just go hit up Walmart tomorrow for half price since they'll be putting out the Christmas candy.

Often times, the kids are too old to be trick or treating too. At least that had been a problem around here.

I'm the person most likely to turn off all her lights and sit in the dark watching TV so that no one dare knock on the door.

I think I will go look for half price chocolate and candy corn when I have to go get milk at the grocery store tomorrow though.
Happy Halloween