The first step to healing is giving abuse a name 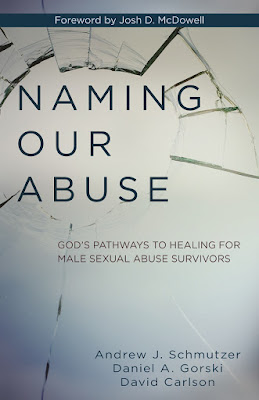 From Penn State to the Catholic Church scandal, stories of sexual abuse are covered in the national media, but news reports do not reveal all the facts of how prevalent abuse is among males. “The standard statistic is that one in six boys is sexually abused before the age of 18 (1in6.org). However, Male Survivor recently reported one in four men has been sexually abused,” Andrew J. Schmutzer, co-author of Naming Our Abuse: God's Pathways to Healing for Male Sexual Abuse Survivors (Kregel Publications/April 27, 2016/ISBN: 978-0825444005/$14.99), explains. “One thing to understand about these statistics is that they are largely based on self-reporting, so they have been historically hard to come by. As specialists know, men don’t readily talk about their abuse.”

Having experienced the horror of sexual abuse themselves, the authors are uniquely qualified to address the healing process. Each one shares his story, modeling for men how telling — and writing — their stories can play a significant role in recovery. “Writing helps the brain process the significance of what happened, not just the fact that it happened,” Schmutzer explains. “Dignity is recaptured by remembering rightly, honestly and deeply. Writing honors pain by putting it in black and white.”

Using the easily relatable metaphor of a car accident, Naming Our Abuse leads the victim from their “Wreck,” to writing the “Accident Report,” on to “Rehabilitation” and ultimately “Driving Again.” The four-step model also illustrates for readers that healing is a process, rather than something that can be healed through a single counseling session, support group or some kind of spiritual experience.

Naming Our Abuse also appeals to men by requiring active engagement as opposed to passive reading. Readers are encouraged to go at their own pace, allowing themselves to identify with the fears, experiences, relational fallout and emotional pain that the authors share. After reading through each stage of recovery, the book prompts readers to reflect on their own experiences (journaling) and consider next steps (questions to answers and action points) and concludes by offering coping tips to help readers on their journey.

Learn more about Naming Our Abuse and its authors at www.kregel.com.

“This book will be a great help to those who have suffered in secret not knowing if they can tell anyone their story or if they will be believed. Please read this book so you will better understand what many men are facing; and if you have been abused, you will be glad it has been put into your hands.”
~ Dr. Erwin W. Lutzer, senior pastor, The Moody Church, Chicago

“In Naming Our Abuse, these powerful stories bring us that much closer to shattering the silence and shame that has choked the lives of too many for too long.”
~ Boz Tchividjian, executive director, GRACE

Andrew J. Schmutzer is Professor of Biblical Studies at Moody Bible Institute in Chicago, IL. He holds a B.A. in Theology from Moody Bible Institute, a Th.M. in Old Testament from Dallas Theological Seminary and a Ph.D. in Old Testament Studies from Trinity International University. Schmutzer’s writing includes numerous academic essays, articles and study note contributions to the New Living Translation Study Bible (Tyndale). He’s a member of Christian Counseling Professionals of Chicagoland, as well as an associate member of the Trauma & Transformation project to address sexual abuse in the Catholic Church. He serves as a consultant for www.1in6.org., an organization to help male victims of sexual abuse.

Schmutzer was born in South Africa and raised by missionary parents in Zululand and Swaziland. He and his wife, Ashley, are co-founders of a support group for sexual abuse survivors called CHAI (Courageous Healing of Abuse and Isolation). The couple has three children.

David Carlson is a special education teacher, working in the suburbs of Chicago for the majority of his adult life. He takes great pride in being an advocate for his students and their families, helping them to navigate whatever challenges life may present.
Andrew Schmutzer Daniel Gorski David Carlson Kregel Naming Our Abuse sexual abuse