Win a copy of Standing Together by Carlos and Rosemarie Evans 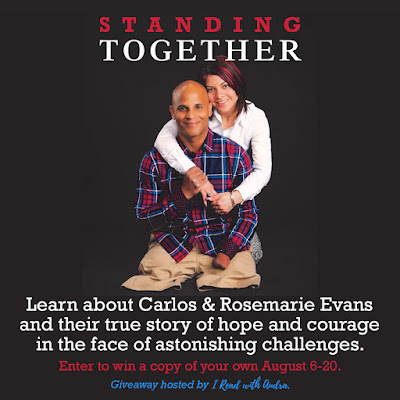 For the next couple of weeks,
the I Read with Audra team is featuring
Standing Together by Carlos and Rosemarie Evans.

Read more about the book below, and enter to win a copy of your own at the bottom of the post.

You can also read the two-part interview with Carlos and Rosemarie by clicking below.
Part 1 ~ Part 2 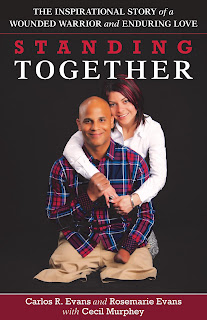 During his fourth deployment, US Marine Corps Sergeant Carlos Evans stepped on an IED--and the loss of both legs and his left hand was just the beginning of the struggle for his life.

For the next two years, he and his wife, Rosemarie, went through the rehabilitation process together. As a nurse and mother of two young children, Rosemarie was used to caring for people, but the task of taking care of her triple-amputee husband brought new challenges every day. In addition to his limb loss, Carlos faced PTSD and developed an addiction to painkillers. He was sure Rosemarie’s life would be better without him--and that it might have been better if he hadn’t survived at all.

But unlike the majority of marriages put under similar strain, Carlos and Rosemarie stayed together. With the help of family, friends, and--most importantly--a strong faith, they’ve built a solid marriage and discovered a ministry they never expected. By the hand of God, their story, which began in devastation, has turned into one that draws in and lifts up more people than either of them would ever have dreamed.

Not only will disabled veterans and their loved ones find help here, Carlos and Rosemarie’s captivating journey also speaks to those who long for stronger marriages, care for loved ones with disabilities, or are facing a new normal in their own lives, small or large. It is a powerful resource for leaning on God in the midst of life’s great difficulties--and for finding ways that, through faith, profound loss can bring incredible blessing.

Read an excerpt from Kregel by clicking here.