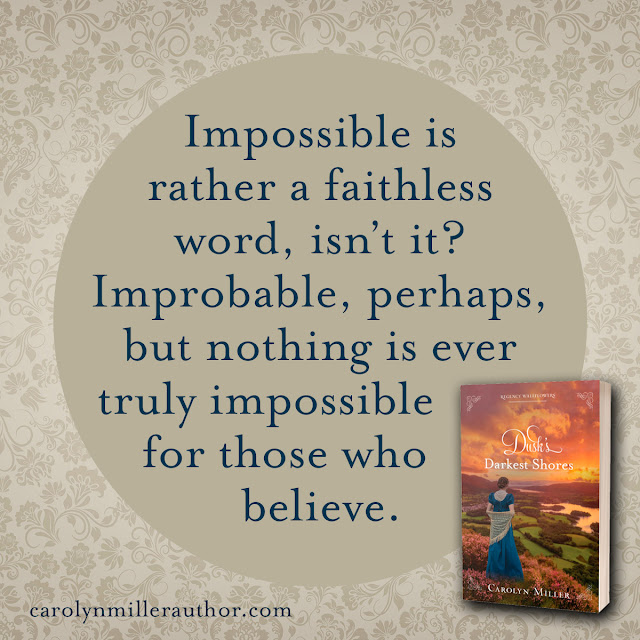 Part 2 of an Interview with Carolyn Miller,

Best-selling author Carolyn Miller is back with a fresh series that will not only thrill readers eager for more of her work, but bring in new fans looking for beautiful writing, fascinating research, deftly woven love stories, and real faith lived out in the Regency period.

Mary Bloomfield has no illusions. Her chances for matrimony have long since passed her by. Still, her circumstances are pleasant enough, especially now that she has found purpose in assisting her father with his medical practice in England's beautiful Lake District. Even without love, it's a peaceful life.

That is until Adam Edgerton returns to the sleepy district. This decorated war hero did not arrive home to acclaim and rest, but to a new battle against the repercussions of an insidious disease. Mary's caring nature cannot stand to see someone suffer--but how can she help this man see any brightness in his future when he's plunged into melancholic darkness, his dreams laid waste by his condition?

Q: What drew you to write Regency fiction? What are some of the popular trademarks of stories set in the time period?

I’ve been a fan of Jane Austen’s works for many years (decades!), and then my sister introduced me to Georgette Heyer, a British novelist whose books essentially established the Regency genre. Once I started reading Heyer, well, I knew I had found my niche. After writing several prize-winning contemporary romance stories, I was told that US publishers wouldn’t want them due to their Australian settings and characters, so I challenged myself to write a Pride and Prejudice–style novel, with some of Georgette Heyer’s wit, and an unapologetic faith thread. That first book drew a publisher’s attention and became The Elusive Miss Ellison, the first book in the Regency Brides: A Legacy of Grace series, which led to two more Regency Brides series.

Some of the hallmarks of Regency fiction include the focus on aristocracy and its trappings, such as the country estate and the town house, balls, and marrying for money versus marrying for love. Many of these books try to emulate Georgette Heyer’s witty dialogue, and focus on the importance of social behavior and its impact on society as much as on the details of gowns. It seems rare to find Regency fiction that focuses on the lives of the working classes or those for whom finances were not so easy to attain, probably because it doesn’t offer the glamour of a Mr. Darcy–type strolling around the hallowed halls of his magnificent Pemberley estate. Many of those Jane Austen–style romances lead people into a fantasy of life in the Regency era. While I’ve written my share of fairy-tale-type fiction, I like to write stories that present relatable people with realistic challenges, woven with faith, love, and humor.

Q: How does Mary’s faith play a role in her daily life? What kind of spiritual promptings does she receive?

Mary is a Christian, someone who tries to follow what Jesus says in her daily life and practice rather than merely offering lip service and an appearance in church each Sunday. She wrestles with her faith, believing far more than what the church edicts allow for, especially in things pertaining to healing and the like.

Mary prays, pauses to listen for a response, and is quick to follow those inner urges to do certain things, such as visit a particular villager or pray for someone. She is conscious that the Holy Spirit has used her to see others healed in the past, and this has built confidence that God will use her in this way again. I love the fact that I can use fiction to talk about some very true things, and some of the incidents mentioned in this book reflect the healings my husband and I have seen in our ministry work. 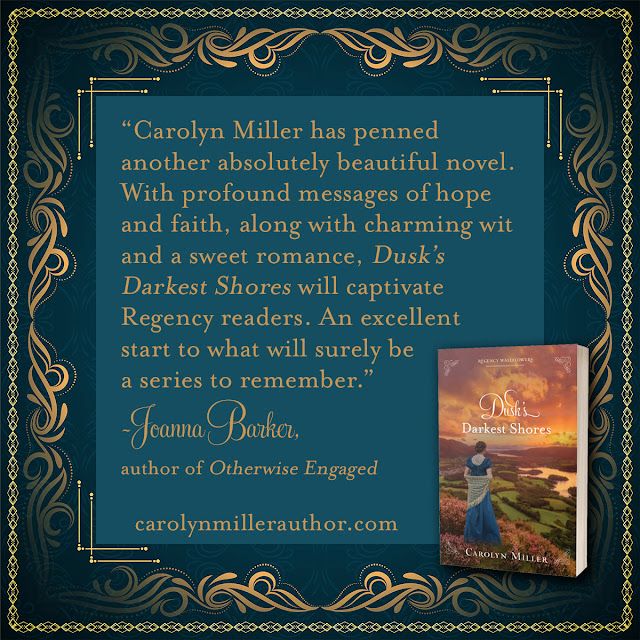 Q: Adam Edgerton comes back from the war with an illness that has changed his life. What challenges would someone in Adam’s situation face in 1811?

For the men who fought during the Napoleonic Wars, there were many diseases that could fell more soldiers than bullets would. Flushing sickness, or Walcheren fever, was one of those illnesses. Very little was known about it at the time, given that it held similar characteristics to malaria, typhoid, and typhus. The lack of medical knowledge meant there was a lack of medical assistance to be offered, leading to thousands of men dying from disease rather than war. Some of these men who recovered enough were then sent from the Netherlands to fight in Portugal, while others were forced to return to England, where they continued to be plagued by fevers which gradually weakened many of the men and led to early graves.

For soldiers like Adam, who were used to being strong, healthy, and independent, being forced to become dependent on others would have felt humbling. To lose one’s hope is one of the most devastating things in life, and for returned soldiers who could not fulfill the roles they always imagined themselves doing, it was traumatic. How could one provide for a family if you could not keep a job? In 1811, obviously the social and financial situations of families and individuals were not supported by a form of social security, so it became very necessary to rely on the support of one’s neighbors and the church. For men returning from war who were facing physical, mental, and emotional challenges, their transition back into a peaceful community would have been most trying. Not only were they facing the impact of illness and injury on their own lives but also on their families, including such things as the future legacy of a farm that had existed in the family for generations.

Q: Mary’s father is the town doctor who treats Adam. Can you tell us more about the medical treatments of the day and what kind of training doctors would have? How much research did you have to do in regard to that part of the story?

In Regency times there were a number of ranks of medical professionals. A surgeon was often apprenticed to an older doctor, learning on the job to eventually attain a role equivalent to our modern-day general practitioners. An apothecary is like our modern-day pharmacist, and they mixed herbs and the like to create medicines to be sold to the public. A physician underwent the most training of all and was skilled in such things as anatomy, physiology, and surgery, and had experience in hospitals. Some of the best hospitals for training included Guy’s Hospital in London (where poet John Keats studied) and Edinburgh, where Mary’s father trained.

Medical treatments in the Regency era varied, as did their effectiveness. Doctors might not receive a great deal of formal education, but they could be well versed in the use of folk remedies and practices that had proved themselves in the past. Without anesthesia, antiseptics, or antibiotics, doctors used a blend of observation, experience, and whatever training they had to diagnose and treat patients. I found The Complete Herbal by Nicholas Culpeper to be extremely helpful in understanding some of the treatments of the day, such as the use of flowers like feverfew in reducing inflammation and temperature. Reading some of the journals, letters, and medical accounts of those suffering from Walcheren fever were invaluable in understanding more about the disease. It was really interesting to weave Regency-appropriate medical knowledge and treatments into this story, and to detail the making of some of the medicines.

Q: Due to his condition, Adam finds himself in some dark places, in more ways than one. What does he struggle with spiritually?

One of the biggest questions a person can face when confronted with challenging circumstances is “Why is this happening to me?” Linked to this is the question of purpose, and when one’s purpose seems to be ripped away, the question becomes, “Who am I anymore?” Adam always thought he’d be a certain type of person and have a certain kind of life, and when the consequences of war affect this, he’s forced to confront these questions of purpose and lost hope.

Connected to this is his challenge to trust God when he feels like God has failed him. It takes time for him to realize that God has placed people in his life who can help him envisage a new future, learn to trust God (and those people), and understand that God’s ways and a future entrusted to Him can lead to a life so much greater than what we can know or understand. 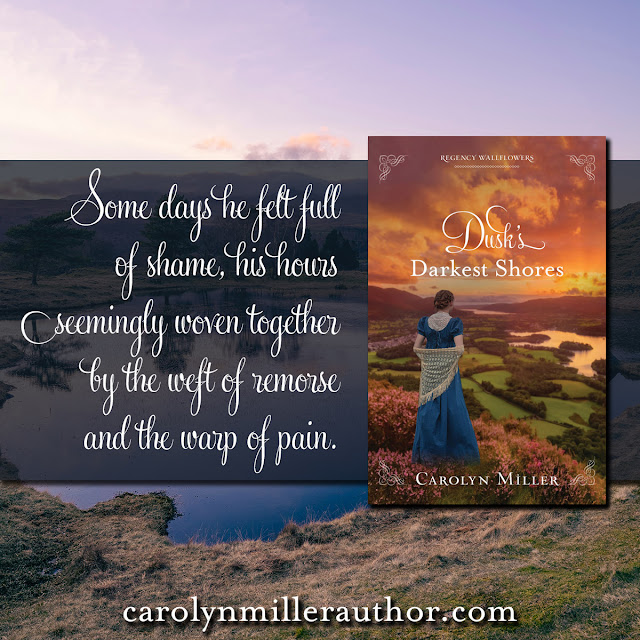 Q: How does the relationship between Mary and Adam evolve from nurse and patient to friends?

Mary is no simpering, fainthearted miss—she might appear meek to some people, but she is well able to speak honestly and with bluntness. Adam needs someone like Mary to speak the truth others are too afraid to, and he reluctantly starts to appreciate the fact that she doesn’t tiptoe around him. Her ability to help him almost like a modern-day physical therapist means they spend a great deal of time together. He soon learns to value her wry humor and kind ways, and he discovers that the things he once thought important were less than necessary after all. They ultimately are a great match of wit, intelligence, faith, and others-focused service, which deepens their friendship into esteem and then love.

I enjoyed writing and developing these scenes, and have had early readers and endorsers write to me to say they found the final scenes of Dusk’s Darkest Shores to be among the most romantic they have read, so I hope other readers enjoy this too.

Q: Without sharing too much, what kind of scandal do Mary and Adam find themselves in?

In Regency times it was considered somewhat scandalous for a single man and woman to spend time alone together. Even writing a letter to a single gentleman or lady would raise eyebrows! So, when one of Mary’s training sessions goes awry, they are forced to explain themselves in the only socially acceptable way possible—for which Mary does not wish to oblige.

Older, wiser, and already aware that she is “on the shelf,” Mary is unwilling to bow to social expectations and accept the role her small-minded village neighbors think she now must play. She has now realized that she does not want scandal or the opinions of others to influence the rest of her life, and she is willing to pay the price, heartbreaking as that might be. It was really good to write a story of an empowered woman, someone who stood against the societal flow and made her own choices, given that wasn’t an option for many women at that time at all.