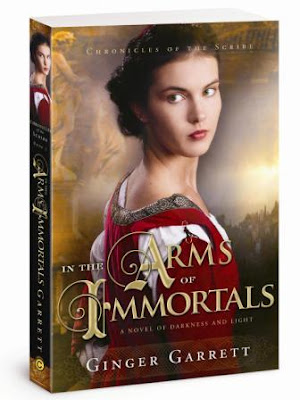 In Book Two of the Chronicles of the Scribe series, popular author Ginger Garrett takes readers back in time to “the greatest natural disaster to ever strike humanity”
In another heart-stopping historical fiction thriller from the author of In the Shadow of the Lions, critically acclaimed author Ginger Garrett paints a captivating portrait of a time when terror ruled and faith was hard to come by. In the Arms of Immortals (David C Cook, September 2009) travels a richly imagined journey into a key moment of history…the arrival of the Black Death in Europe.

This story of unseen battle, loving presence, and eventual redemption begins when a strange ship docks in a medieval Sicilian harbor. That night an old man falls ill… then the baker’s wife… then a street urchin. By morning half the townspeople are dead and more are dying—horribly. And no one has a clue what is happening or how to stop it. Not the local priest. Not the rich baron or his powerful knight. And not the three women at the heart of this book: the baron’s proud daughter, Panthea, the outcast healer, Gio, and Mariskka, an unwilling visitor from another time.
Though the Church fights to stand between the plague and the people, the sickness is too powerful for a Church that will not allow medicine to be studied outside its walls. The Church holds a monopoly on healing and on God, but when neither rescues the people, the people lose hope in both, and the conflict between Science and Faith begins its long burn. In a time when the faithful have no answers and the faithless terrorize the countryside, only the bravest will dare hold on to a silent God.

The Chronicles of the Scribe Series are thrilling tales of an angelic presence called “the Scribe, the first writer”—dictated to a series of twentieth-century strugglers, but lived out in the pages of history. Each of Garrett’s novels in the series targets a different significant moment of the past—both its mundane reality and supernatural significance—with a special emphasis on women’s experience. Tautly suspenseful and deeply moving, In the Arms of Immortals will deftly lift readers into its fascinating narrative of angels and demons, mortality and immortality.

Author Bio: An expert in ancient women’s history, critically acclaimed author Ginger Garrett (Dark Hour, Chosen: The Lost Diaries of Queen Esther, and most recently In the Shadow of Lions) creates novels and nonfiction resources that explore the lives of historical women. In addition to her writing, Garrett is a frequent radio and television guest. She resides in Georgia with her husband and three children.
Watch the In the Arms of Immortals video trailer!
In the Arms of Immortals (Chronicles of the Scribe, Book Two) by Ginger Garrett
David C Cook/September 2009
ISBN: 978-0-7814-4888-8/softcover/304 pages/$14.99
http://www.davidccook.com/ ~ http://www.gingergarrett.com/
For review copies or interview information, contact:
Audra Jennings - 800-927-0517 x104 - ajennings(at)tbbmedia.com
Posted by Audra Jennings at 7:00 AM

Email ThisBlogThis!Share to TwitterShare to FacebookShare to Pinterest
Labels: David C Cook, Ginger Garrett, In the Arms of Immortals