My shorter hair and Spot in the Pot

First of all, for those of you who were wanting to see a picture of my new, shorter hair, here it is. I had to convince the woman who cut it to cut as much as she did. Probably about 4 inches.

Anyway, I look weird because I was trying really hard to get a decent picture of myself without the glare from the flash being too close and looking like I had 4 chins. That, and I kept blinking so I had a hard time keeping my eyes open. That's why I look bug-eyed. 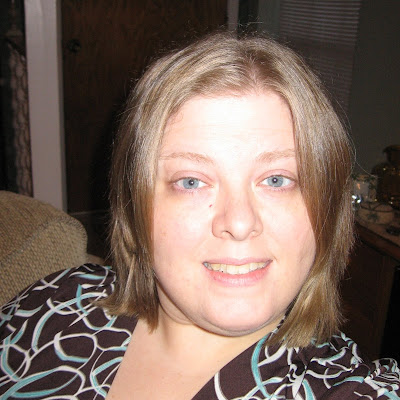 In other news, a kitten - not a tiny one - has decided to make the palm tree pot on my back porch it's home. It's a huge pot, and I guess it's just homey feeling. The heck if I know why.

It's scared to death of me and shoots off in a flash. It's kind of an ugly little thing in a way. It's gray, orange and white splotched. I was over at my parents house talking about it, and said that I was going to name it. I just have a thing about name whatever. Even a cat I don't really want. When Mom asked what color it was, and I answered, Dad said, "it sounds ugly."

I decided instead of coming up with a name myself, that I would call Peyton and ask her what a good name for an ugly cat would be. So, I called her up, told her I had this cat in my palm tree pot and that it needed a name. She asked what color it was, and I said it had these different colored spots, so she proudly and confidently says, "we should name him Spot."

So, I came home in the pouring rain, made my way up the stepping stones to the back door, and sure enough Spot was in his pot. I called Mom back to tell her that, "Spot was in his pot. Peyton didn't realize how great a name she had come up with - Spot in the Pot."

I tried to get a picture of Spot in the Pot, but he ran off when he saw me through the windows, and I wasn't able to get a good picture through the glass with the amount of light outside at the time.

I'll try to get one the next time I see him or her. Suffice it to say, he doesn't look like a Dalmatian.
Posted by Audra Jennings at 8:33 PM