When a Daughter Becomes a Mother, Can She Learn to Accept Her Own? 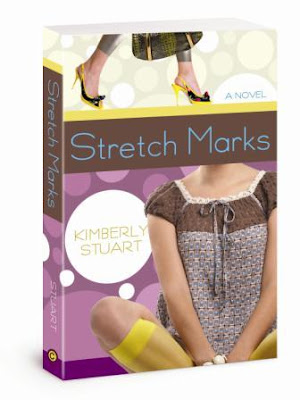 With her trademark irreverent humor and a surprising and satisfying take on romance, popular author Kimberly Stuart beckons readers to a wild ride of weird cravings, swollen feet, and a growing belly in her new book, Stretch Marks (David C Cook, September 2009). In this comic yet poignant novel about mothers and daughters, Stuart bravely tackles the issues of divorce, sex outside of marriage, and single parenthood as granola-eating, sensible shoe–wearing Mia is forced to face her estranged relationship with her mother.

Mia Rathbun is an earth-conscious, yoga-practicing twenty-something living in Chicago. She’s overworked and underpaid as a social worker, she belongs to PETA, and she recycles the tops of pizza boxes. Her boyfriend, Lars, is a free-spirited freelance writer (read: mooch) who disdains the conventions of marriage but is happy to build a life with Mia. That is until Mia becomes pregnant.

Left on her own, Mia just begins to accustom herself to the looming prospect of single parenthood when her mother, Babs, shows up to “help.” Babs is a cruise ship hostess who cannot abide her daughter’s affection for wheatgrass, tofu, and deep breathing. The two have an estranged relationship but are forced to connect as Mia’s belly grows and Babs is faced with the promise of a grandchild.

Mia also has a whole neighborhood of quirky characters who want to help, including her BFF Frankie, a magenta-haired librarian; Silas, the courtly gentleman of indeterminate age who lives downstairs; and Adam, proprietor of the corner grocery store where Mia shops. But it’s Adam—endearing, kind, possessed of a perfect smile and impeccable Persian manners—who ultimately charms Babs and rescues Mia from more than one mother-induced meltdown. Could it be that Mia and Babs might actually be able to get along?

In an authentic but tender novel about family, grace, and the importance of a good grocer, Stretch Marks doesn’t shy away from hard issues and unlikely hope. “Not for the weak of status-quo-heart, Stretch Marks is a relevant story of a daughter who becomes a mother and, in the process, learns to accept her own,” says Stuart. “I wrote this book because I think the characters will resonate with the not-so-average Christian reader and the more-likely-average non-Christian reader who grapples with the craziness of being a girl and then a mother in an unexpected way.”

Author Bio: Kimberly Stuart holds degrees from St. Olaf College and the University of Iowa. After teaching Spanish and English as a second language in Chicago, Minneapolis, Costa Rica, and eastern Iowa, she took a huge increase in pay to be a full-time mom. She makes her home in Des Moines, Iowa, with her husband and three young children. She is also the author of Act Two: A Novel in Perfect Pitch.