The world is full of crazy people

I know, I know... You are all saying, yes, Audra, we know. What brings you to this conclusion today?
I watch, or listen, to way too much TV while on the computer at home. Last night while working away, I had TLC on. Not sure what was on at the time. Maybe it was Cake Boss. Why are there cake shows on at least three networks now? Not to mention cake competitions on at least two. Can no one have an original idea? I don't know about you, but I question eating any of those cakes as many days as they work on them and the fact that their hands have been all over them before and after the use of power tools.
But, I digress. I'm not blogging about cake. Well, I am, but I'm not.
As if Toddlers and Tiaras was not bad enough -- and now I have King of the Crown on for some reason, not to be confused with the show about the pageant dress designer, something about a dress (but not Say Yes to the Dress) -- I have found a show that I really, really refuse to watch. I place it next to Kate +8, which is now a train wreck, when it comes to TLC shows.
The new show is entitled My Monkey Baby. Show synopsis from TLC.com, "Meet the Johnsons, and their beloved 'child' Jessica Marie, problem is she's a monkey! But call her that, and her parents will go bananas. Just what motivates these people to raise a monkey as their child?" 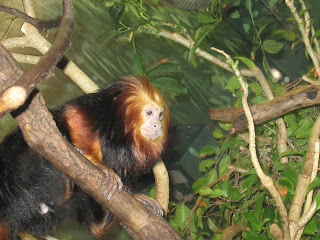 It's not even a chimp that might be considered cute. It's a tree monkey or something. I don't know the exact primate term, however, I know my term for the Johnsons. INSANE!
(And no, this picture to the left is not Jessica Marie. It's a monkey from the National Zoo.)
I commented about this on my Facebook, and later said, "why hasn't anyone commented on my Monkey Baby comment."
My co-worker Rick said he was too afraid to because he didn't know what "My Monkey Baby" meant. I called him laughing, "it's just a monkey, treated like a baby. It's not code for anything."
It's not like "my baby's daddy" or something like that. If it were though, I guess it could be the opposite of Toddlers and Tiaras, but you really shouldn't talk about your children that way.
Posted by Audra Jennings at 8:47 PM

Email ThisBlogThis!Share to TwitterShare to FacebookShare to Pinterest
Labels: My Monkey Baby, TLC

Oh, my! There's just something rather disturbing about that, isn't there?

Okay, I thought I had heard everything when I read yesterday about the woman who tweeted about her miscarriage while she was having it.
But this is really weird too.