A Cringe-Free Plan for Talking About Your Faith 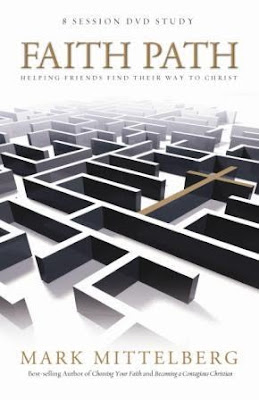 Many Christians cringe at the thought of talking with non-Christians about faith. It’s almost like trying to explain music to a deaf person or a painting to someone who is blind. But one important thing any Christian can do is understand their friends—listen to them and consider how they think. Then it becomes possible to truly communicate God’s truth.

Now there is an exciting new resource for church groups and individuals with a heart to more effectively engage unbelievers in faith conversations. Based on Mark Mittelberg’s book Choosing Your Faith, the eight-lesson Faith Path workbook (David C Cook, October 2009) is designed to be used in a group with the Faith Path DVD and builds on Mittelberg’s sensible, evenhanded approach to evangelism.

“Faith. Everybody lives by it—even skeptics and atheists! That’s right. Everyone you know trusts something they believe in but can’t prove or know absolutely. They take it on faith,” Mittelberg says. “If you want to talk to your friends about your faith, it helps to understand what they believe and how they got there. Because badgering people to change their minds just doesn’t work.”

DVD segments include teaching from Mittelberg, as well as short interviews with fascinating people talking about the faith paths they were on before they came to Christ. Approaches such as relativism, traditionalism, mysticism, authoritarianism, and others are explored. Interviews seen on the DVD are then discussed in a thought-provoking, enjoyable group format, as well as in workbook entries. Among other things, participants will learn to recognize the danger of paths that lead away from Christ and will deepen their own faith in Christ and reinforce their reasons for believing.

No other DVD/workbooks exist for Choosing Your Faith (workbook includes leader’s guide materials), so Faith Path—with live interviews and audience interaction—promises to set new trends for learning how to engage others in spiritual conversations.

“Relativists, traditionalists, mystics, authoritarians, and others…they’re all here. And after you understand how these folks think about faith, you can help them find a trustworthy pathway to truth,” Mittelberg says. “Because no matter what your friends believe, they still matter to God.”

Author Bio: Mark Mittelberg is a best-selling author, sought-after speaker, and a leading outreach strategist. He is the author of Choosing Your Faith, coauthor (with Lee Strobel) of The Unexpected Adventure, and coauthor (with Bill Hybels and Lee Strobel) of the Becoming a Contagious Christian curriculum. He previously served as the evangelism director for Willow Creek Community Church and the Willow Creek Association. Mark earned a master’s degree in philosophy of religion from Trinity Evangelical Divinity School. He lives in Southern California with his wife, Heidi, and their two teenage children.