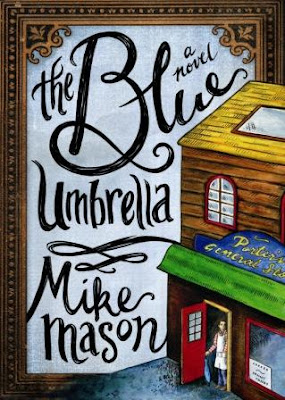 In his first novel, best-selling author Mike Mason offers the Unfortunate Events crowd a beautiful literary fantasy with deep spiritual resonance
What would happen if all the world’s weather was controlled by one man with a blue umbrella? If your mother had been killed by lightning, would you trust this man? This is the decision facing 10-year-old Zac Sparks in Mike Mason’s new page-turning fantasy novel, The Blue Umbrella (David C Cook, October 2009). Probing the depths of good and evil, the first in Mason’s series for 9 to 12 year olds is a superbly written children’s story with deep spiritual resonance.

When Zac Sparks’s mother dies, he’s sent to live in Five Corners with his cruel old Aunties. It isn’t long before Zac knows something strange is going on. Five Corners is populated with weird characters—a midget butler, a girl who doesn’t speak, a blind balloon seller, and a mysterious singer who is heard but not seen. Then there’s the Aunties’ father, Dada. Zac’s first encounter with Dada is so terrifying he faints dead away.

The one bright spot is Sky Porter, the proprietor of the general store across the street, a friendly soul who encourages Zac—when the Aunties aren’t looking—and shows him a kindness that is sadly lacking from his dismal life. But Sky isn’t what he seems either, and when Zac learns Sky’s amazing secret he realizes, to his dismay, that this wonderful man may have a very dark side as well.

Discovering that Dada is an evil magician who is intent on stealing the ultimate treasure, Zac knows many lives are at stake, including his own. With time running out, he must turn to the one person who might be able to help: Sky Porter. Can Zac trust him?

In the vein of Lewis and Tolkien, Mason has crafted a fantasy that will certainly appeal to fans of Harry Potter, The Golden Compass, Lemony Snicket, and The Chronicles of Narnia. “In this era of climate change, when weather is arguably the most important issue facing the world, a story that dramatizes the human role and responsibility in creating weather is highly relevant and timely,” says Mason. “The Blue Umbrella is permeated with a sense of awe at the power and beauty of weather, and it asks the question: Who is behind all this?”
Author Bio: Mike Mason is the best-selling, award-winning author of The Mystery of Marriage, The Gospel According to Job, Practicing the Presence of People, and many others. He has an M.A. in English and has studied theology at Regent College. He lives in Langley, BC, Canada, with his wife, Karen, a family physician. They have one daughter, Heather, who is pursuing a career in dance and the arts. The Blue Umbrella is Mike’s first novel.
The Blue Umbrella by Mike Mason
David C Cook/October 2009
ISBN: 978-1-4347-6526-0/425 pages/softcover/$14.99
http://www.davidccook.com/ - http://www.mikemasonbooks.com/

The Blue Umbrella, by Mike Mason from David C. Cook on Vimeo.