Just another Saturday in the "Can"

I was a better aunt this weekend than the last time that the girls had soccer games starting at 9:00 on a Saturday morning. First up was Miss Paigeybeth. Her games seem to last FOR-EV-VER. FOR-EV-VER. It was 0-0 for the longest time, and they ended up losing. 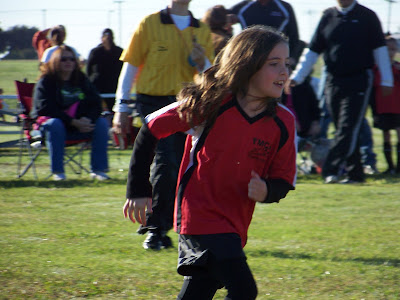 Then at 10:00 was Pey-Pey and Madison's game. Much quicker and more exciting. We lost, probably mostly because we assisted with some of the other teams goals. Oh, well. 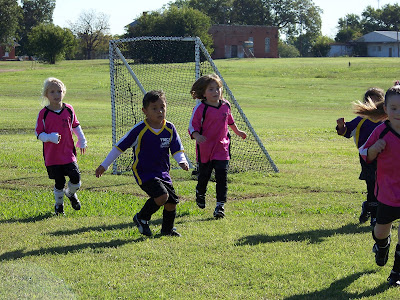 After the games, my parents and I wondered up to Waxahachie for some shopping. Ended up getting a head start on Christmas shopping, but I can't tell you for who or what because you never know who might be reading this. There were races up in Ennis today, so coming back home, we thought we might get stuck among all the traffic heading into the races for all of eternity.
One car thought they were more special than anyone else on the road and kept driving down the shoulder and working itself back in. And then again. And then again. I so wanted that Ennis police officer with the Barney Fife photo on his clipboard (that gave me a ticket 8 years ago) to give a ticket to that driver. Would have served them right. I hate it when people think they are so special they can just rewrite the driving laws.
Then, tonight we went to the Palace to see Vicki Lawrence. Dad had thrown a bit of a pouting fit a few weeks ago when Mom didn't buy tickets to take the girls to this show. He doesn't really want to do anything without taking the granddaughters these days. Mom told him it was supposed to be for a "mature audience." He probably stewed when we saw one of their great-grandfathers at the show and he asked "no girls?"
Well, it's a good thing they didn't come along because of the language and content. Vicki Lawrence can be funny, but oh, she got on topics that just aren't comfortable when you attend with your parents, no matter how old you are.
Here she is as "Mama". One woman in attendance had dressed up just like her. I guess I know what she is wearing next weekend to whatever Halloween party she is attending. 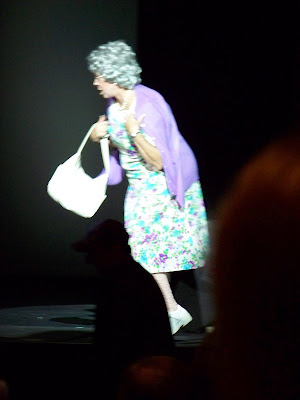 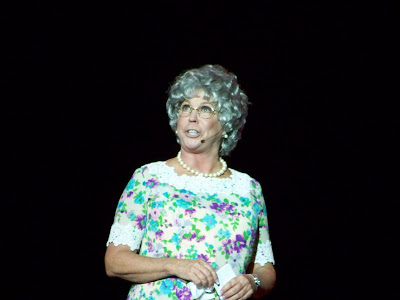