My week in pictures

Did I just do something different to my Blogger settings for it to go psycho on me? There's a new compose window and I'm not having the easiest of times arranging photos. (AND where is spell check?) Sooooo... let's see how this works.

On Tuesday morning, we set out to get away. For those of you who live around here, have you wondered about all the Buc-ees signs down I-45 on the way home from Dallas? Well, we gave in and stopped in Madisonville to figure out what Buc-ees was all about. (Mental reminder to self... must tell Tonda that I did this.) 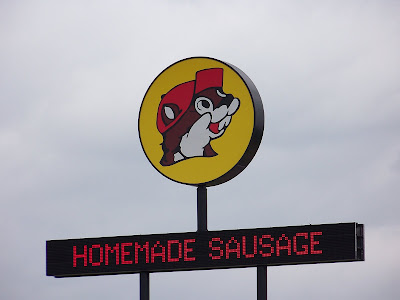 No, we did not get any homemade sausage in whatever variety, beaver or otherwise, they were selling. I can tell you they had the world's biggest restrooms.
In order to be officially on vacation, we must stop at a Cracker Barrel, which we did around Conroe. I do not have a picture of that because I believe most readers of this blog know what that looks like.
We stopped in The Woodlands to see what was going on there. Not much, but we did take a waterway tour (not impressive) where our boat driver had a toothache and was almost impossible to understand. I did pick up that the people who worked in one building walked over a bridge to get their coffee every morning because the other building had a Starbucks. Every time the guide started talking, this man across from us started talking loudly in Spanish to his wife and son with him, making it even harder to understand the guide. 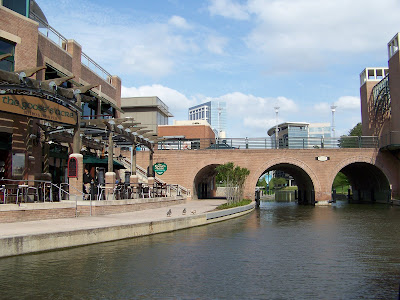 Oh, and the guy also was on the boat one night and all the people that live in these new condos have flat screen TVs on the wall and everyone was watching American Idol at the same time.
I also took some pictures of ducks, but those weren't too interesting.
We went on down to Houston and stayed the night. On Wednesday, we had Astros tickets. Before the game, we wondered around downtown to a park that had art installations. I do not know what this is supposed to be, but here are Mom and I in front of this thing. 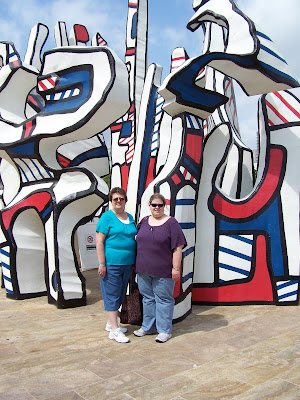 As for the game, while we were on the 22nd row again (like the Ranger game Monday), this was 22 rows from the field rather one row from the top. A much better view. 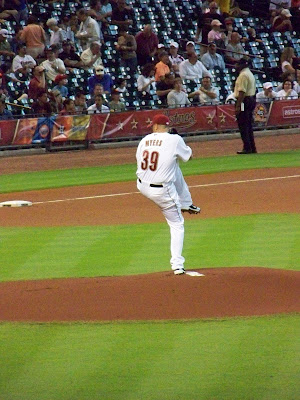 The older couple that had seats next to us brought their 50-something son. He was deaf, so they had some communication issues with him. Other than that, he had some other issues as well. Such as a lack of understanding personal space of others sitting next to you. He also dumped a cup of relish on his hot dog and the smell of sweet pickles about made me sick. Thankfully, he decided to move down a row while I took a trip to the restroom for some space. 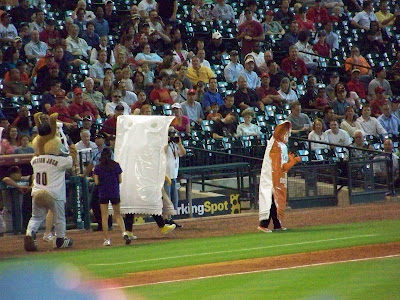 The Rangers have the Ozarka dot race. The Astros have the Taco Bell hot sauce race. Hot beat Mild and Fire. The Giants beat the Astros 10-4.
In the search for a wild flower trail that Mom wanted to see, after the game, we headed towards San Antonio enroute to the Hill Country. (We skipped the Buc-ees stop on I-10.)
Since I had never actually been down on the Riverwalk (it's been a long time since I've been to SA), we rode on the Riverwalk which, of course, was much more impressive than whatever that was in The Woodlands. 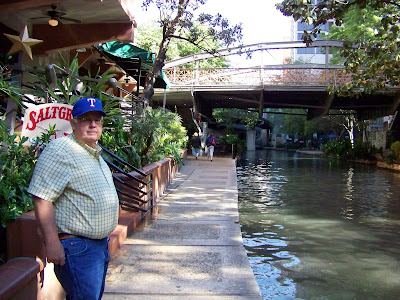 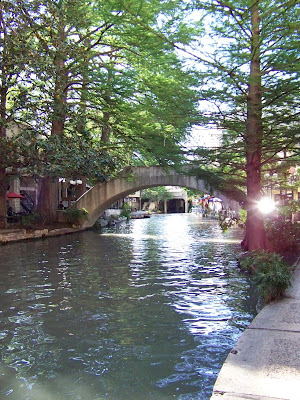 Wherever there are palm trees, I must take a picture. 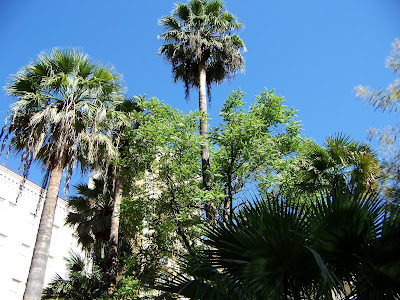 And this building is an optical illusion if the picture is taken at the exact right angle - sort of difficult while moving. It looks like it is flat. 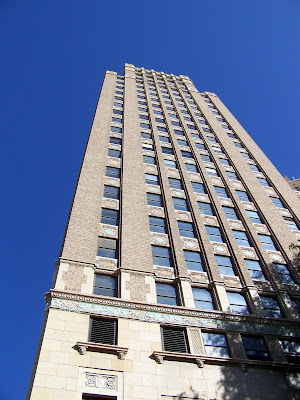 And this building was built to look like the bow of a boat, but I uploaded the wrong picture. I've had so much trouble adjusting my images that I give up on changing it out. 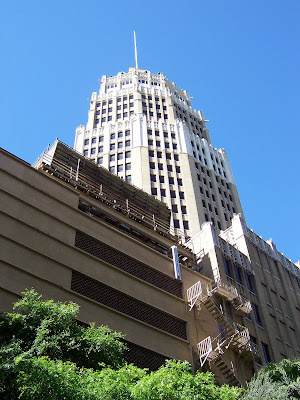 Then, we walked on down to the Alamo. It's very unimpressive really, especially with all the modern buildings and such around it. And, it's pretty small. BUT, as Texans, we must "Remember the Alamo!" 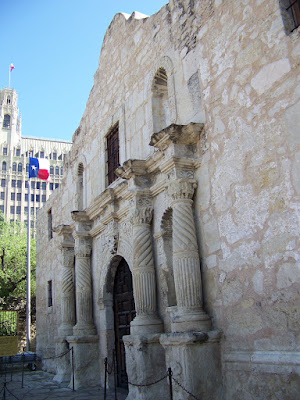 So, upon leaving San Antonio, we wandered out further west to winding roads and big hills in our search for wild flowers. We'd heard people talk about Gardner State Park, and I wanted my parents to see the Frio River.
I pulled over to roll down my window and take a picture of the bluebonnets. Basically the only wild flower picture we got since it's hard to roll down the window and snap pictures at 70 miles an hour. This was the most impressive patch anyway. 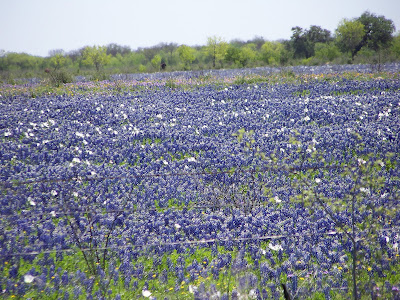 We finally made it to the state park which was smaller than I figured and honestly less impressive than I thought it would be. I got a picture of a small squirrel - I have a thing about squirrel pictures too. 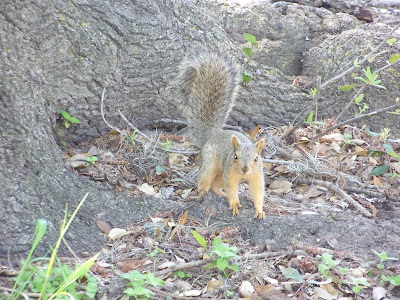 The Frio River is beautiful - and of course cold. Fed from cold springs, the water is clear all the way to the bottom. These pictures aren't as awesome as the ones I took 9 years ago, but we never did figure out how to get to the overlook I remembered being up above the place we stayed when I chaperoned the youth retreat at church. 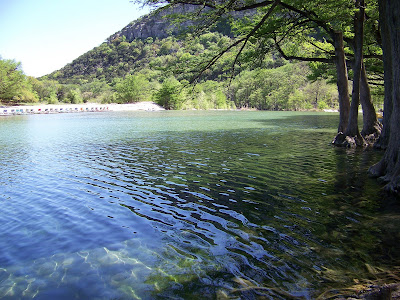 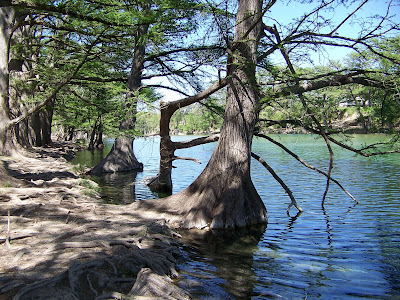 We drove back a very "scenic" route in order to try to find where the retreat had been and ended up on the hilliest, curviest road ever (and that says a lot given the corkscrews between Custer State Park and Mt. Rushmore we went on last year). I was more than a bit queasy after all that.
We decided against going all the way up to where one of the trails that Texas Highways had outlined. If we hadn't seen flowers the way we went, we weren't going to see any more. I mean, if passing by the Johnson Ranch and the place wasn't coated in all varieties, where were you going to find flowers?
After stopping north of Austin Thursday night, we were home by 11 AM on Friday. You don't get any pictures of Austin becaue it was dark.
Posted by Audra Jennings at 10:29 PM

It's been years since I went to San Antonio. I loved the riverwalk and had to take the tour.
I need to drag the kids out there and force them to have educational fun. lol