An interview with Beth Wiseman,
Author of The Promise


Most authors draw from life experience when writing a book. However, for bestselling author Beth Wiseman, the inspiration for The Promise (Thomas Nelson/ September 30, 2014/ISBN 978-1401685959 /$15.99) came from encounters most readers could never imagine happening in their own lives.

Q: In just a few sentences, could you summarize The Promise from your eyes as the author?

The Promise is the largest project I’ve undertaken since my first book was published in 2008. It was a step way out of the box and a far cry from my Amish novels and Texas contemporaries. Not only was I shifting to another genre and writing a much edgier story, but the real-life events that inspired the novel were still tender on my heart. I was so incredibly engrossed in the fictionalization that I often found myself using ‘real’ names, and I would have to go back and make corrections.

Q: In your letter to readers in the back of The Promise, you share the book was based on actual events you were witness to. This story is something you’d expect to see in a movie and is certainly an exciting and emotional read.  Can you share a little bit about your inspiration for this story? 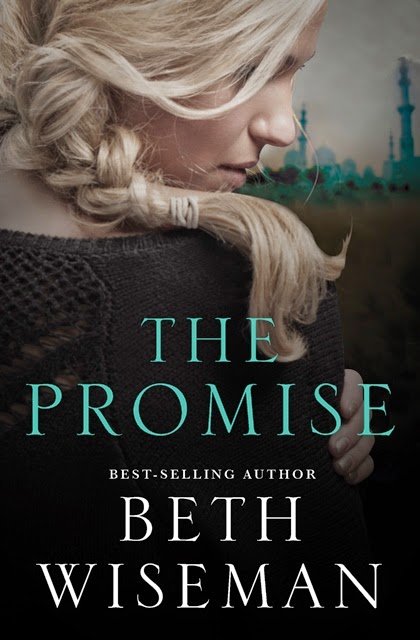 Before it ever entered my mind to write The Promise, I’d already decided I wanted to write a story about a rescue. This came to light after a dream I had, and I got up in the middle of the night and jotted down some notes — notes that eventually became a synopsis. But I kept getting nudges to move in another direction; to still write a rescue story, but something much more personal than the plot I’d literally dreamed. In The Promise, Mallory takes a dangerous journey to Pakistan, fueled by her adventurous spirit and her desire to save a life.  But the trip becomes something much different as Mallory finds herself in grave danger. Someone close to me, “Laurie,” found herself in a similar situation, and it was up to me to work with the Consulate in Peshawar, the Embassy in Islamabad and the State Department to get Laurie back to the United States. In a letter to readers at the back of the book, I have included details about the actual events that inspired the story. However, this book would have never happened unless Laurie was onboard. She wanted to tell her story, hoping that perhaps even one woman might be spared this type of betrayal. From there . . . my ‘rescue’ story came full circle.

Q: How long does it normally take for you to write a book?

This is a tough question because so many of my writing projects overlap, which often means I have to jump around. But I would estimate that actual writing — not including revisions and edits — is usually about three months. The Promise was the exception, though.  This novel went through extensive rewrites and edits in an effort get it in the best shape possible. I also started research for The Promise months before I started the writing.  The entire process, from research to finalization, was close to a year.

Q: Your main character, Mallory, is driven by her number-one goal: to save a life. Have you ever been as passionate as Mallory about a goal, and if so, were you able to achieve it?

My number one goal for years was to write ONE book, to make ONE difference in a life. This is a great example of how God has used me in ways I could have never foreseen.  I’m on my 23rd book, and I’ve received countless emails and letters from readers who say my books changed them for the better in some way. It seems as if there is a reason for every bad situation that came my way, and God never wastes a life experience. I have written about so many topics that I wouldn’t be qualified to write about — or that wouldn’t seem credible — if I hadn’t had been involved with or lived the experience.

Q: As Christians, we want to think the best about people, but sadly in life we have to be more skeptical about the motives of others. What are some of the things women should look out for in order not to fall prey to situations such as the one in your book?

I think that common sense prevails, but sometimes when we are in the midst of a situation, it is impossible to see the dangers looming around us — especially if it is a romantic relationship. In my opinion, women should always authenticate a stranger prior to meeting. For example, if he says he works at a bank, can you verify that? Trust your life-long friends and family. If they see a problem, try to step outside of the situation and take a peek from their perspective.

Q: What are some of the warning signs friends and family should watch for in a potentially abusive or dangerous relationship?

In both the real-life story and fictional version, both “Laurie” and Mallory distanced themselves from family and friends. They kept secrets from those closest to them and strived to justify illogical decisions and choices.

Q: What advice would you share with someone who has a friend or family member who has not made the best or wisest choices and is coping with the fallout of his or her decisions? How can you be supportive of a person, even when you don’t agree with his or her choices?

Love unconditionally and don’t judge. There is no one on this planet who hasn’t made mistakes and bad choices.  It’s what we do with those experiences that defines us and molds our future. Most of the time, we can’t see clearly when we are the ones in the throes of a bad relationship or dangerous situation. And when it’s all over and we’ve somehow survived, it’s almost impossible not to ask, “Why me? Why did I have to go through that?” As for my experiences, it has often taken years for me to recognize God turning my ‘wrongs’ into something for the overall good in ways I could have never foreseen.

Q: How did writing The Promise bring closure to you and others involved in the events that inspired the book?

Laurie (name changed to protect her identity) and I grew up together. I love her very much. But when she left for Pakistan, I wasn’t sure I would ever see her again. When she did return home, she was incredibly broken, both physically and emotionally. I’d always assumed there would be an opportunity to say, “I told you so.” However, that thought wasn’t at the forefront of my mind as I watched her trying to put her life back together. She’d lost almost everything, but her spirit to survive and push forward shone through, and I wanted to help her with that. God truly does work in such mysterious ways. I could have never foreseen how collaborating on this book would bring us so much closer than we’d ever been. For the first time, I was able to see past my own judgments at the choices she’d made, lending an understanding from her point of view. In some ways we agree to disagree, but writing the book gave us a closer relationship we both treasure.  From Laurie: “I took a leap of faith. I believed that man and loved him with all my heart. He might have broken my heart, but not my spirit or the will to be me. I refuse to give him that power.” She is healing, and I am proud of her.

Q: Is there a spiritual message you hope readers are able to take away from reading The Promise?

We all make mistakes, have regrets and carry burdens from our past. But by clinging to our faith, we are often gifted with opportunities to use these mistakes in a way that sheds light amidst the darkness, defining who we are and how we will be remembered. In the novel, Mallory wants to save a life. She ends up doing much more and in a way she could have never foreseen. Laurie returned to the United States a broken woman, but she shared her experiences via this novel in an effort to save as many women as possible from falling into a similar situation — an opportunity she also could never have predicted. And as I said earlier, God never wastes a life experience.

Q: Many people may take this story and say it reveals the dangers of Islam. Was exploring different religions one of your goals?

There are good and bad people in every religion. Islam gets a bad rap sometimes because of 9-11. Overall, it is a peaceful religion. For some Americans, it is hard for us to distinguish between peaceful Islam and radical Islam. Does that mean I agree with all things Islam? No. I’m a Christian. I wouldn’t say my intent was to explore different religions. My intent was to tell an entertaining story inspired by actual events and to do so in a way that sheds light on the good and the bad. If it saves one woman from falling victim to any kind of scheming predator, then I have done my job for God. I’ve taken Laurie’s experience and molded it into a warning that I hope will also draw readers closer to Him.

Wiseman can be found at Fans of Beth Wiseman on Facebook where she interacts with readers. Learn more about the author and her books at bethwiseman.com and on Twitter (@bethwiseman).
Beth Wiseman Pakistan The Promise Thomas Nelson