Sarah Sundin gives insight into her latest release, Anchor in the Storm

June 17, 2016
An interview with Sarah Sundin,
Author of Anchor in the Storm 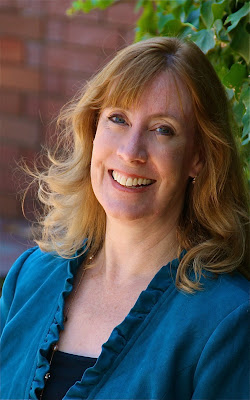 Male and female stereotypes have always existed. World War II brought major changes to the status quo in America as necessity challenged traditional male/female roles and opportunities. Sarah Sundin delves into these dynamics in the second installment in her Waves of Freedom series, Anchor in the Storm (Revell/May 3, 2016/ISBN: 9780800723439/ $14.99). As the needs of a nation brought millions of women into the workforce, some for the first time, ladies were suddenly finding new strengths and facing new tests, including Lillian Avery.

Q: Anchor in the Storm is the second release in your Waves of Freedom series, set in the romantic yet tumultuous World War II period. Tell us a little about this story and how the series ties together.
For plucky Lillian Avery, America’s entry into World War II means a chance to prove herself as a pharmacist in Boston. She loves the wartime challenges of her new job but spurns the attention of society boy Ensign Archer Vandenberg. As Arch’s destroyer battles U-boats along the East Coast, Lillian uncovers a black market drug ring. Arch and Lillian work together on the investigation, but he wonders if he can ever earn her trust and affection.

Anchor in the Storm is the second book in the Waves of Freedom series. Arch is the best friend of Jim Avery, hero of Through Waters Deep, and Lillian is Jim’s sister.

Q: Your book is set around the WWII U-boat war off the US East Coast, which some readers may not be familiar with. What was most interesting to you about that historical moment?

In the first six months of 1942, one hundred merchant ships were sunk off the US East Coast, killing thousands of merchant marines and passengers. Many of these sinkings were viewed by people on shore, at the beach with their families. It was a horrible time as the Navy scrambled to protect shipping with meager resources, and it really brought the war home to Americans. 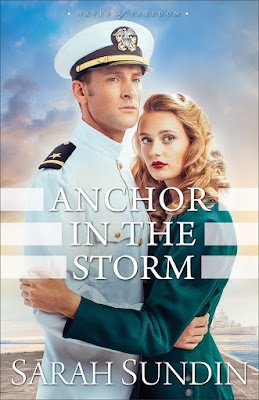 Q: Why did you decide to give your heroine, Lillian Avery, a visible physical disability? In what ways would her life have been more challenging in 1942 than today?

My oldest son was born missing his left arm below the elbow. He’s never let it stop him; he’s a mechanical engineer and a black belt in karate. He’s faced challenges, but I’m thankful he was born in modern times when we have more enlightened views of disabilities and have protections for the disabled. So what would it be like to have a disability in the 1940s, especially for a young lady with a visible physical one? It was interesting to show Lillian’s struggles and the prejudices she faces, but also the kindnesses shown to her.

Q: Lillian struggles to open her heart to God and to others because of past hurts, but a friendship helps her mature in this area. How have friendships with women impacted your own spiritual and emotional growth?

So much. Not only am I an introvert, but I was very unpopular as a child, which caused me to withdraw. The Lord has placed some amazing women in my life who have coaxed me out of my shell and loved me for who I am — and who showed me what a trusting friendship looks like.

Q: Job opportunities exploded for women in the 1940s because of the draft. What were some of the positive and negative aspects of this explosion? Would Lillian have been able to find a job as a pharmacist in that day otherwise?

World War II brought extreme changes for women. The needs of the nation brought millions of women into the workforce. The positive benefits include the immense increase in production that allowed the Allies to win the war. Also, women challenged themselves with new roles and often discovered new strengths in themselves. The negative issues are similar to what we face today, primarily with difficulties finding childcare. As for Lillian, I like to think she would have found a job during peacetime, but it would have been difficult for a woman in a man’s field — especially with a disability.

Q: Lillian’s boss wasn’t thrilled with the idea of hiring a woman, let alone one with a disability. Have you ever faced challenging relationships on the job? How did you handle those situations?

I’m also a pharmacist, which made this novel fun to write. But I entered the profession at a time when women were accepted. I’ve only faced minor “prejudices.” When I answer the phone, physicians often sometimes sound surprised I’m the pharmacist — they still expect a man! Mostly, it amuses me.

Like everyone else, I’ve had challenging relationships on the job. I’ve handled them through kindness, professionalism and refusing to be drawn into gossip.

Q: How easy is it for women to find too much security or identity in their career?

In Anchor in the Storm, both Arch and Lillian come to question how much of their identity comes from their careers. It’s easy to define ourselves by the roles we play, but when the roles change, who are we? The man who loses his job and can’t find a new one in his profession? The stay-at-home mom facing an empty nest? Anyone facing a career change? As Christians, we know our identity is in Christ alone, but that’s easier to say than to feel. The challenge is to hold on to that intellectual knowledge of our eternal security and identity when our earthly roles change.

Q: Your leading man, Archer Vandenberg, suffers from combat fatigue, or what we now call post-traumatic stress disorder (PTSD). How was PTSD viewed and treated during World War II versus today?

Our understanding of PTSD has slowly been changing. In the traditional military, it was viewed as cowardice or weak nerves. When World War II began, physicians didn’t really know how to treat combat fatigue, and men were often discharged, labeled as “unfit for duty.” Great strides were made during the war as physicians and commanders slowly came to see it as a medical condition, but treatment remained difficult. It still is.

Q: Have you ever struggled with judging people and lumping them into categories like some of your main characters do in Anchor in the Storm?

Don’t we all? We know it isn’t right, but many of us harbor quiet prejudices, some of which we aren’t even aware of. Experience has led Arch to see all women as gold-diggers and has led Lillian to see all men as jerks. It isn’t uncommon for us to think poorly of certain groups of people due to race, religion, socioeconomic level, profession, political views, or the way they dress. We must always work to ferret out those views in our hearts and remind ourselves that these are human beings, not just members of a group we don’t like.

Q: What are some of the life lessons you hope soak into your readers’ hearts while they’re enjoying Anchor in the Storm?

Both Arch and Lillian learn to place their security in Christ alone, to allow God to be their anchor no matter what happens in life. The theme verse for this novel is Hebrews 6:18–19 (KJV): “We might have a strong consolation, who have fled for refuge to lay hold upon the hope set before us: Which hope we have as an anchor of the soul, both sure and stedfast.”

Q: What are a few of your favorite go-to resources for World War II history information?

My all-time favorite is a website called Hyperwar (http://ibiblio.org/hyperwar/), which contains hundreds of primary documents and books about World War II. For Anchor in the Storm, some of my best resources were a gem called Pharmacy in World War II by Dennis B. Worthen and books about the battle at sea off the East Coast, including Samuel Eliot Morison’s classic, The Battle of the Atlantic: September 1939-May 1943.

Q: What do you have planned for the third installment in the Waves of Freedom series?

When Tides Turn will be released in spring 2017, and it features Lt. Dan Avery and Quintessa Beaumont, Lillian’s friend and roommate. The last thing no-nonsense Dan wants to see on his radar is fun-loving Tess — even if she has joined the WAVES.


Anchor in the Storm Revell Sarah Sundin Waves of Freedom