New series will keep readers on the edge of their seats

April 02, 2020
Part 2 of an interview with Terry Brennan,
Author of Ishmael Covenant 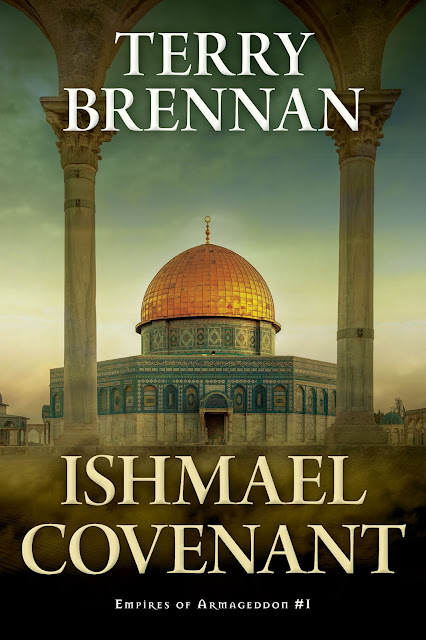 What if three ancient empires were poised to rise again and begin an epic battle for the land they once occupied in the Middle East? What if this battle was the fulfillment of a prophecy that would set into motion the end of the world as we know it? Those questions were the launching point for award-winning author Terry Brennan as he began writing his new series, Empires of Armageddon. The series from Kregel Publications begins with Ishmael Covenant, a fast-paced, modern-day international thriller.

Fans of Joel C. Rosenberg, Steven James, and Ted Dekker will relish the deadly whirlpool of international intrigue and end-times prophecy in Ishmael Covenant and eagerly await the rest of this new trilogy.

Learn more about Ishmael Covenant in this interview with Terry Brennan.

Q: Tell us a little bit about your new Empires of Armageddon series, specifically the first book, Ishmael Covenant.

The three-book Empires of Armageddon series is a fast-paced, modern-day international thriller, constructed around historical fact and historical fiction. The story envelops the lives of nearly a dozen key characters but is driven by three primary characters: Diplomatic Security Service Special Agent Brian Mullaney; Joseph Atticus Cleveland, the newly appointed US ambassador to Israel; and their unknown but evident enemy, the Turk, an immortal agent of evil who serves the One.

Out of the chaos and conflict of today’s Middle East, it appears that three ancient empires (Persian, Islamic, and Ottoman) are about to resurrect themselves. One belief of the Islamic faith is that once an Islamic nation rules any part of the earth, it rules that part of the earth forever. So, ultimately, each of those empires would covet, and attempt to control, the same slice of land that each empire once ruled—from the Fertile Crescent of Mesopotamia, through the rocky desert known as Palestine, to the Nile Delta in Egypt. The collision of those competing empires could trigger the climactic events in the Valley of Megiddo.

The series explores how this potential clash of empires might impact current history, future events, and the viability of the Jewish state. One immediate impact of an emergent Persian Empire (an alliance between the majority Shia governments of Iran and Iraq) is to drive their ancient enemies, the Sunni Arabs of Saudi Arabia, into a treaty and mutual defense pact with, of all people, Israel. Thus the Ishmael Covenant, the joining together of the tribe of Abraham and the tribe of Ishmael.

The plot is kick-started when the first of two messianic prophecies, written in 1794 by the legendary Jewish Talmudic scholar the Vilna Gaon, is revealed in Jerusalem. Mullaney accepts the responsibility of guardian of the Gaon’s second prophecy and the box that protects it, which puts his life, and the lives of his loved ones, in terrible peril and direct opposition to the Turk. The Turk and the One have been focused on a singular purpose for thousands of years: if they can prevent the fulfillment of one messianic biblical prophecy, they can eradicate the validity of all prophecy and change the end of the Book—the outcome of the Battle of Armageddon. What is contained in the Gaon’s prophecy could destroy their plans.

That theme of ultimate evil trying to overthrow the plans of God fuels the story of Ishmael Covenant, which utilizes this geopolitical cauldron and its biblical ramifications as the backdrop for an epic testing of one man’s character when faced with multiple adversaries who threaten his family, his faith, and his country. How Brian Mullaney responds to his calling could dictate the fate of this world—and the onset of the next.

Q: How do aspects of actual history come together with a fictional modern-day story in your book?

There are numerous threads of actual history woven throughout the plot, threads that become critical catalysts in the unfolding of Ishmael Covenant and the rest of the series.

The story of the Vilna Gaon—Rabbi Elijah ben Shlomo Zalman (1720–1797)—that launches the narrative is accurate in all its historical elements. He was the foremost Talmudic scholar of his age and a renowned genius on both sacred and secular learning. The story of the Gaon’s prophecy about Russia and Crimea, revealed by his great-great-grandson in 2014, is true and led many to believe that the coming of the Jewish Messiah was near at hand. The Gaon did attempt three trips to Jerusalem from his native Lithuania; the last one, only a few years before his death, ended prematurely in Konigsberg, Prussia. All of that history is extensively integrated into the story arc that plays out over all three books. The story of the Gaon’s second prophecy is a product of my own imagination.

The ancient biblical conflict between the nation of Israel and the people of Amalek—the descendants of Abraham and Ishmael—is a fundamental element in the conflict driving the series. Other historically accurate elements of the book include the rise of ISIS in Syria and Iraq in 2014, the worldwide confiscation of Iranian financial assets following the hostage crisis in 1979, NATO’s nuclear sharing project which still has sixty-one nuclear bombs in bunkers at the Incirlik Airbase, the geopolitical weapon that water has become in the Middle East, the history of the Hurva Synagogue in Jerusalem, and the history of the Jews in Turkey. All were vital to the development of this fictional series.

Q: What kind of research went into this series? How much time have you spent in the locales where Ishmael Covenant takes place?

I did an extensive amount of online research on the history of the Vilna Gaon, his involvement with Jewish mysticism (kabbalah), his continued influence on Jewish theology, and the role his followers played in the building and history of the Hurva Synagogue in Jerusalem. Much more contemporary research was required into the concept of NATO’s policy of nuclear sharing as well as the structure of the US State Department and the duties and layout of its operations center. Additionally, the mission and makeup of the US military’s top-secret Joint Special Operations Command was earnestly pursued and is factually portrayed, as was the structure and assignment of the Diplomatic Security Service, one of America’s “armed services” and the most widely represented law enforcement agency in the world.

Several years ago, my wife and I spent three weeks in Israel, visiting almost all the locales in this and my previous series, immersing ourselves in the history of the land and the culture of its people. Engaging a Palestinian Christian as our guide provided us with some unique access. Over the years, I’ve made many trips to Washington, DC, including an exclusive trip to what was then called the Old Executive Office Building inside the White House compound. By necessity, locales with high security or limited access were researched online, often aided by visuals through Google Maps.

Q: How did your career in journalism prepare you to write this series?

Journalists are trained observers. They absorb, analyze, and report on what they see. When I write, I see the stories as movies. In other words, I’m writing what I see in my mind, which is similar to what I did as a journalist, especially my ten years as a sportswriter. I would watch an event and then replay it in my mind to accurately recount it for my readers.

Perhaps the most tangible result of being a journalist is that I approach my writing as a gardener, not as an architect. Architects are the writers who have everything planned and plotted out before they get started, including extensive biographies for all their key characters and a detailed outline that is a road map for the entire book. Journalists don’t have the time for such exhaustive planning. Journalists are more like gardeners. You watch a game. You’re on deadline. You have an idea. You start writing and see where it takes you. My characters generally reveal themselves to me as I write. So, in writing novels, my process is normally to see how the plot grows and matures and where my characters take the story.

But one of the first things I learned as a writer is that novels are not written in the same way newspaper stories are written. There is an age-old structure to the way fictional novels are written, a structure that brings clarity to the story and comfort to readers. So, I needed to be retrained for a new style of writing.

Q: You also spent nearly two decades working in the nonprofit sector. What bearing did your work with homeless people in New York have on these stories?

My nonprofit career, my second career, impacted the series in a significant way. For twenty years I worked for agencies that ministered to homeless people in New York City. While I was a journalist, I really didn’t have a social justice bone in my body. After living in The Bowery Mission for seven years, not only did my social justice perspective change by seeing injustice, poverty, mental illness, and racism on a personal level, but my heart changed as well.

Two of the primary characters in the series are black men, one African American, one Caribbean. As a white man, they were challenging characters for me to write because I wanted to get them right. I wanted to accurately represent the reality of being a black man in America. I read a lot and received solid counsel and guidance from those close to me who personally experience a black man’s reality. I hope the characters and their worldviews are portrayed honestly and accurately.