Not meant to meet a Picker

Last October when we went Iowa, one of my dad's must sees was stopping in LeClaire, home to Antique Archaeology. that is the home base and shop of the American Pickers from the History Channel. 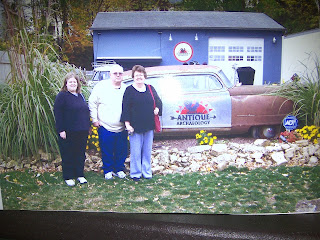 When we arrived in town, we found the small shop that used to be a gas station. If you go around the block, signs say "Keep Out - We aren't the Pickers." I guess lots of people come visit. Well, there were several cars along the narrow road out front the day we were there from several states. And it was a random Thursday in late October.

That day, there was a sign out front, leaning against their van "Closed for taping." My dad was crushed and we spent about four hours in that town in the hopes they would reopen. We went to the visitor's center and came back.We went to lunch and came back. Alas, Dad did not get to see Danielle and all her tattoo glory.

At the time, I had only seen one episode, so I was not nearly as disappointed. Since that time, I have become a fan of the show.

Fast forward to last night. Mom calls after church and asks, "guess who was in town last night?" When my mother asks that question, it could seriously anyone in the world from a relative to Matt Damon. I gave up easily.

"The Pickers! Ruth Ann said her son saw it on Facebook."

Well, I don't think I would have guessed that quickly.

They were at an Italian restaurant a block from where I ate Saturday night. I did not look closely, but I don't think their van was there at the time. 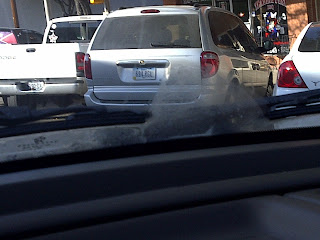 When I went to try to track comments on Facebook, I did not find anything. I did find someone's blog saying they were at Old Mexican Inn, home of the famous orange dip at lunch Sunday. My parents may have passed the parking lot with their van parked in as they went to pick up some chicken.

Dad and I seriously went out looking at the parking lots at the hotels in town to see if they were still in town. Thinking about it, I was out at the movies near the most likely hotel Saturday night.

Guess we just weren't meant to meet a Picker. I bet we know some of the people they picked.

Someone probably talked them into getting some fruitcake at Collin Street Bakery. Speaking of Corsicana institutions, I saw a minivan from Iowa in front of Caleb's Diner Friday after work. I even took a picture and sent it to Paige as a part of our license plate game. I bet it was their advance scouting crew or the camera guys.
Posted by Audra Jennings at 8:34 PM