Home for the Holidays at Bass Hall

My mom received an offer for some tickets to Bass Hall and had a certain number of vouchers to exchange for certain shows. So, last night, we went to the "Home for the Holidays" show featuring the Fort Worth Symphony Orchestra.

All the "Black Friday" shopping I did yesterday is late in the afternoon in Waxahachie on the way up (where my dad had to return something to Belk that he and mom got the week before) to Ft. Worth. Oh, and we stopped at Home Goods in Midlothian. We were there around 4-5 PM, a good 12 hours after the masses were in stores.

We decided to do the Friday night show, but didn't realize that the Ft. Worth downtown lighting and Christmas parade were taking place last night. We got stuck in traffic and could not get to our parking garage for Bass Hall. We were driving around block, and block, and waiting for police direction and so forth and so on. I was driving at the time, but my eyeballs started floating from too much Diet Coke at Cracker Barrel where my mom purchased sock monkey salt and pepper shakers for the Christmas season. (I admit they were quite cute.) I had enough of what could be a long time of sitting in traffic. I called for a Chinese fire drill and made Dad get out and drive.

I ran on up the block to Bass Hall where they asked if I had my ticket. Normally, they don't make you show a ticket until you are going in the doors to the concert hall to be seated. I told the usher that the people I was with had my ticket and were stuck in the traffic. I was just heading down to the restrooms. Heck, I wasn't going to argue with the guy. I probably would have pushed him down. I know, I know, TMI.

Anyway, it was a great show with the Ft. Worth Symphony Orchestra, the Southwestern Seminary Master Chorale and the Dorothy Shaw Bell Choir. I don't think I had ever actually seen a bell choir before. At the end when they had an audience sing-along, Santa Claus made an appearance and fake snow floated down from the ceiling.

Great show, but I'm no closer to being in the Christmas state of mind than I was before. Unfortunately. No, I don't think I am a trying too hard. I'm trying to be open about it. And the fact that Mom had a lot of her Christmas decorations out and her tree up didn't make me want to put mine up. 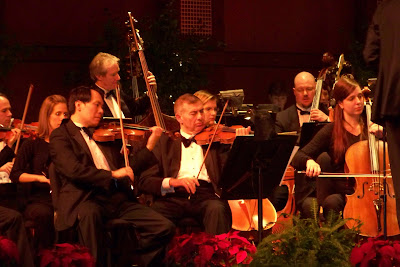 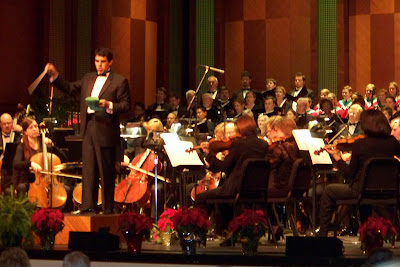 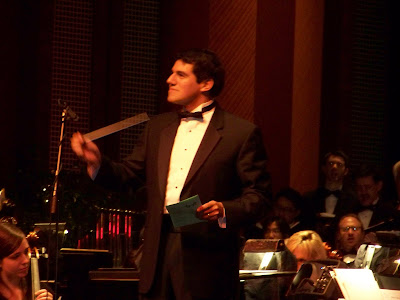 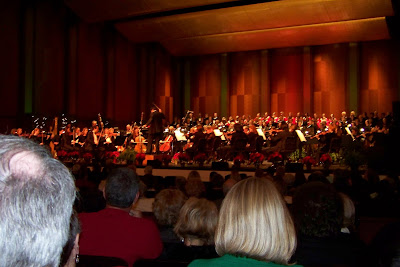 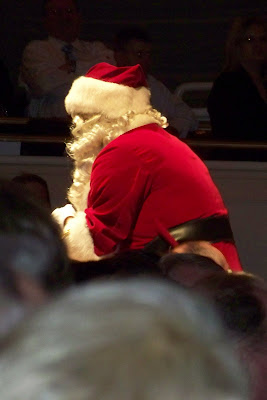 Posted by Audra Jennings at 8:12 PM