What have I done this week?

I'm on vacation this week and have really not done anything to speak of. That's good and that's bad at the same time. It's good sometimes to do nothing, but at the same time I wanted to do something this week.
I have had some time to read, and yesterday, I read about half a book in a few hours time. This time I picked a book from my random stack of unread books. Some of these books were given to me by a friend from a publisher back at a book convention in February. I do have some books from work. I have some books that I've bought or used gift cards to get. (But, no one has paid me for any reviews, in case you were wondering FTC.)
My random selection was When the Day of Evil Comes by Melanie Wells. This is a book that I was given from Melissa at Multnomah. She gave me books 1 & 3 on purpose because now that I have read book 1, I have to buy book 2. (Should I wait to see if I get an Amazon gift card later this month for my birthday?) 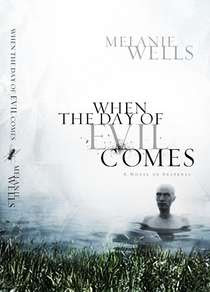 Product description:
Bizarre Encounter Initiates Extreme Spiritual Battle
Dylan Foster’s carefully constructed, orderly world begins to fray, thread by thread, the day the eyes of hell turn upon her. After a chance encounter with a creepy, sickly looking stranger, her days become punctuated with disturbing, inexplicable events. Desperate for answers, Dylan seeks not only to extricate herself from the nightmare, but to separate the spiritual from the earthly, friend from foe, angel from devil, good from evil. She’s smack in the eye of the battle with only God-issued spiritual armor and her own wits to protect her.
I saw the first fly alight on the edge of my plate during supper. This was no ordinary fly. It was huge. The size of a small Volkswagen. I could have painted daisies on it and sold rides to small children.
School is back in session, but for psychology professor Dylan Foster, the promise of a new semester is dying in the heat of the late Texas summer. First, there is the bizarre encounter with a ghastly pale stranger. Then her mother’s engagement ring turns up—the same ring that was buried with her mother two years before.
Soon, Dylan’s carefully ordered world is unraveling, one thread at a time. A former patient accuses her of impropriety, putting her career in jeopardy. A suicide plunges her deeper into shadow. Relationships with colleagues start to crumble. And then there are those flies in her house...
Dylan Foster is about to get a crash course in spiritual warfare—and a glimpse of her own small but significant role in a vast eternal conflict. But when the dust settles, will anything be left of her life as she knows it?
My thoughts:
Angels/demons and spiritual warfare are not normally subjects I go for. Some parts might even be considered kind of creepy. However, I think what hooked me more than the storyline was the characters. Dylan kind of reminds me of myself in a way, in a smart-aleck-speaks-her-mind kind of way.
Then there is the funeral home director, David, with a great sense of humor. Actually one the funeral directors I know has a sense of humor - probably have to. One of the funniest characters is fellow psychologist, John. But it's funny at his expense funny.
In the end, there were parts that were still unresolved - thus the need for books 2 & 3, I suppose. I've found a great deal on Amazon for The Soul Hunter, it's just a matter of whether or not I'm going to wait until after my birthday.
Actually, I'm considering going to Dallas tomorrow for the heck of it, so maybe I'll wander by a bookstore. For more info about the author and series, visit www.melaniewells.com.
Posted by Audra Jennings at 9:00 AM

Email ThisBlogThis!Share to TwitterShare to FacebookShare to Pinterest
Labels: Melanie Wells, Multnomah, When the Day of Evil Comes

I read book two in this series. I thought it was pretty creepy.