How available are you? 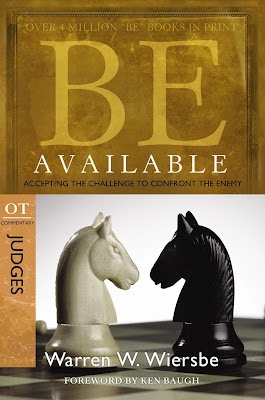 Dr. Warren Wiersbe’s BE series offers simple
but not simplistic knowledge
The Old Testament contains vast riches of spiritual knowledge, and Dr. Warren Wiersbe mines the depths of that wisdom with straightforward clarity in David C Cook’s latest updates to the “BE” commentary series. Wiersbe carefully examines many aspects of the Old Testament and makes spiritual applications as Christians explore the lives of the Jewish people. The lives of God’s chosen people paint a picture of courage and bravery, despite their tendency to disobey, and the rulers and prophets of this time played a vital role in bringing God’s message to His people. Throughout these commentaries, God’s faithfulness to respond to cries of repentance provides strong examples of how He continues to lovingly lead His people.

Dr. Warren Wiersbe has devoted his life to the deep examination of God’s Word. He is an internationally known Bible teacher, former pastor of The Moody Church in Chicago, and the author of more than 150 books. The “BE” series is comprised of fifty titles and, with more than four million copies in print, has helped countless numbers of readers to better understand and apply God’s Word to their daily lives. Dr. Wiersbe’s commentaries combine historical explanations and thought-provoking questions with the unchanging truth of Scripture in such a way that Christians can easily grasp the relevance of the Old Testament.

Commentaries to be released this fall include:

• Be Reverent: Bowing Before Our Awesome God—The book of Ezekiel studies God’s glory, His throne, and the honor of His name as it shows how the Lord used the prophet Ezekiel during the Jews’ Babylonian captivity to send a very clear message: “You will know that I am the Lord.” (September 2010/ISBN: 978-1-4347-0050-6)

• Be Heroic: Demonstrating Your Bravery by Your Walk—The Old Testament books of Haggai, Zachariah, Nehemiah, and Ezra combine to form an unforgettable look at the Jewish people as they struggle to rebuild their temple and complete the work God has given them to do, challenging us to be heroic in a world that desperately needs everyday anonymous heroes. (September 2010/ISBN: 978-0-7814-0335-1)

• Be Available: Accepting the Challenge to Confront the Enemy—This is a study of the book of Judges and encourages people to be available, no matter how dark the day. Be available to trust God’s Word, yield to His Spirit, and do His bidding. (September 2010/ISBN: 978-1-4347-0048-3/199 pages)

• Be Restored: Trusting God to See Us Through—Restoration is the theme of 2 Samuel as Wiersbe explores David’s role in the restoration of Israel’s national unity, David’s restoration to God after his sin, and the restoration of the throne after Absolom’s rebellion. Throughout this restoration process, God empowers His people to accomplish His will. (September 2010/ISBN: 978-1-4347-0049-0)

• Be Responsible: Being Good Stewards of God’s Gifts—I Kings follows a nation through a series of leaders and highlights the importance of moral character in the role of leadership. This study also shows the severe consequences experienced by a nation that leaves God out of national affairs. (November 2010/ISBN: 978-1-4347-0054-4)

• Be Concerned: Making a Difference in Your Lifetime—The minor prophets, Amos, Obadiah, Malachi, and Zephaniah, teach God’s people to be more concerned about others and how to be prepared for the Messiah’s coming. (November 2010/ISBN: 978-0-7814-0337-5)

• Be Equipped: Acquiring the Tools for Spiritual Success—Deuteronomy studies the lessons Moses taught Israel as they prepared to enter the Promised Land. Understanding what it means to share God’s covenant equips us to face the future without fear. (November 2010/ISBN: 978-1-4347-0052-0)

• Be Distinct: Standing Firmly Against the World’s Tides—The books of 2 Kings and 2 Chronicles reveal the consequences of failing to be distinct among those who refuse to recognize and follow God. Wiersbe offers practical application for today’s churches to stand up for Christ when others refuse. (November 2010/ISBN: 978-1-4347-0051-3)