Books from my "for fun" list - Meet the Jacksons

I've said it before, and I'll say it again. I really don't understand how book bloggers are able to read so many books and are always posting. I guess I am always to busy working with everyone covering books all the time (literally) in order to share what I do read for fun. And I don't get too much time to do it. Even the books I have read, I haven't found the time to blog about.

However, sending out posting reminders, and an email from a client convicted me to get some posts made this week. But the email from the client wasn't accusatory in any way and had nothing to do with my blog. She just mentioned she knew I liked a certain author, and I remembered I had asked her for a book I hadn't posted on. Actually two. The only two books I have asked for in who knows when! And I don't ask for books because I know I myself can't be timely in actually blogging about them.

That's why I buy a good number of the fiction books I read. I'm aware of my limitations.

So here are a few of my personal recommendations from the last several upon several months. 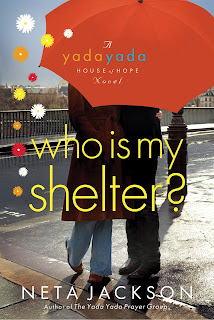 Gabby knows God is the God of second chances.


But can she give one to the man who betrayed her?

When she was thrown out of the penthouse she shared with her husband and their sons, Gabby didn’t know if she’d ever find a soft place to land. But after seeking refuge at the shelter where she works, extraordinary things happen as she is reintroduced to God.

From the ashes of her marriage comes the House of Hope—a safe haven for homeless moms and their children.

But now those ashes of her destroyed marriage are being stirred again. When her long-gone husband’s life hits rock bottom, he reappears and asks for one more chance. And Gabby faces what feels like an impossible choice. Take him back. Or keep moving forward without him. Toward someone new who hasn’t betrayed her.

Is God redeeming what Gabby thought was gone forever? Or is He leading her down a different path and giving her something—and someone—new?

I worked on the first three releases of Neta's Yada Yada Prayer Group series. This is the final book of her Yada Yada House of Hope series which includes some of the favorite characters from her first series.

I can identify with Gabby's insecurities and obsessions. But she has much more restraint than I have. I'd have slapped her estranged husband up one side and down another. Actually, someone already did that. If you caught book three, Who Do I Lean On? that's the cliff hanger of the book. If you haven't, you need to go back and start with book one!

With every one of Neta's books, I devour them. I actually will toss aside my "I really need to finish that for work" guilt aside and sit down and read her books. They're believable. They show flawed people and the people that love them anyway.

This book is floating out there among my relatives somewhere. Speaking of OCD - I'm that way with my library of books. I hope I get my books around the holidays. I think I deserve some Amazon.com gift cards for Christmas so I can supply my mother, grandmother and aunt with more reading material. This book is actually one that Thomas Nelson so kindly sent to me. (Thanks Katie!)

From the beginning Harry Bentley has been a friend to Gabby Fairbanks, the main character in Neta's House of Hope novels, but you’ve seen Harry only through Gabby’s eyes and may not realize he is a retired Chicago cop who put himself on the line by blowing the whistle on a corrupt and dangerous colleague.


Harry Bentley, was doing just fine. He had custody of his grandson, DaShawn, giving him a second chance at being a good parent. He was enjoying a second romance with the enchanting Estelle Williams. He had finally connected with God, thanks to the Yada Yada brothers. And he was even enjoying SouledOut Community Church and helping at Manna House shelter for women. So, why was his eye giving him fits?

A blind spot had developed in the very center of his vision with strange distortions around it. Was it a brain tumor? A stroke? Diabetes? Worse ... was he going blind? There was no way he could face life like this ... let alone raise his grandson or propose marriage to Estelle. Where was God? And why, at the height of his crisis, did all sorts of other complications crop up-his alcoholism, Estelle's emotionally disturbed son, his renegade boss from the Chicago Police Department, and an attempt on the life of Gabby Fairbanks' estranged husband? He couldn't see his way clear ... until God gave him a "second sight."

The Yada Yada Brothers novels by Dave Jackson parallel Neta’s House of Hope novels and represent a different kind of reading enjoyment, three-dimensional literature, if you will. It’s something that only a husband and wife writing team could pull off. Each novel stands alone but takes place in the same time frame, same neighborhood, involving some of the same characters living through their own dramas and crises but interacting with and affecting one another … just the way it happens in real life.

Actually, you should probably read this one before you read this one before Neta's book. It actually takes place at the same point in the story as book 3 in Neta's series. I think I actually read them  in reverse order. I can't really remember for sure since I'm so behind on posting. It's really fun in that you get the men's perspective of what is going on at the same time.

Dave had the same kind of eye problems that Harry has in the book, so he writes from experience. I can only imagine how scary and stressful it all was.

The book is also floating around somewhere because I'm the only one that had already purchased it on Amazon.


Visit www.daveneta.com for more
info about all the Jacksons' books!
Posted by Audra Jennings at 7:35 PM