What if sacrificing your dream was the only way to get what you really wanted? 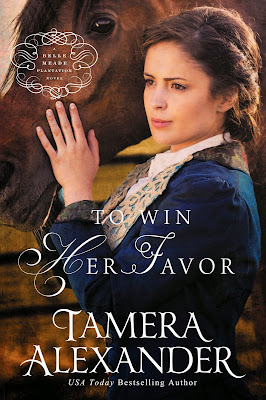 In Tamera Alexander’s riveting new novel, a young woman caught in a marriage of convenience must sacrifice everything to save her home, her land, and the people she truly loves.

Against the backdrop of one of the most turbulent times in American history, the post-Civil War era, one woman struggles against prejudice, injustice and suffocating conventions of the 19th century to pursue her dream. Tamera Alexander’s To Win Her Favor (Zondervan/May 12, 2015/ISBN: 9780310291077/ $15.99), the second stand-alone novel in the Belle Meade Plantation series, is already receiving high praise. According to Library Journal, “Strong characters, a sense of the times and the themes of love, friendship and the importance of loyalty and determination make To Win Her Favor a triumph.”

Maggie Linden lost nearly everything in the Civil War — including most of her family. She’s about to lose her stables and land at Linden Downs and her thoroughbred racing hopes as well. A gifted rider in a world where ladies never race, Maggie is determined that her mare, Bourbon Belle, will become a champion. Indeed, her only hope of saving Linden Downs is if the horse takes the top purse in the inaugural Peyton Stakes, the richest race ever run in America. To give his daughter a chance, Maggie’s wily father makes a barter. But his agreement includes one troublesome detail: Maggie must marry a man she’s never met — a man she never would have chosen for herself.

An Irishman far from home, Cullen McGrath left a once-prosperous life in England because of a horse-racing scandal that nearly ruined him. He’s come to Nashville for a fresh start, hoping to buy land and begin farming, all while determined to stay as far away from thoroughbred racing as possible. With “No Irish Need Apply” signs greeting him at every turn, Cullen finds starting over proves much more difficult than he wagered. When Maggie Linden’s father makes him an offer he shouldn’t accept, he finds it impossible to refuse.

In this page-turning tale, Alexander includes revealing insights about the challenges females faced in the 19th century and the courage it took to overcome them. In marriage, women were to be passive, obedient and cooperative. But in horse racing, women weren’t even allowed to participate. White men owned the blood horses, and young slave boys were the ones who jockeyed the magnificent thoroughbreds. Women and girls weren’t allowed— at least, not without a fight.

To Win Her Favor captures a challenging and pivotal time in American history when social and racial tensions ran high in the years following the Civil War. The Emancipation Proclamation of 1863 granted freedom to slaves in the 10 states still in rebellion, but it didn’t outlaw slavery, nor did it grant citizenship to ex-slaves. But Freedmen weren’t the only ones who suffered enormous abuse and ridicule. Irish immigrants, like Cullen, were scorned by society and routinely ridiculed alongside Freedmen in both newspapers and daily life.

While revisiting this chapter in American history can be painful, Alexander, a Southerner herself, believes it’s important to learn what the era can teach us about ourselves and others. Her latest novel encompasses not only themes of forgiveness and extraordinary courage, but it also explores burgeoning love and the intimacies of marriage between a man and woman who didn’t choose to be together. And yet, because they hold the key to each other’s dreams, they struggle to make it work.

Alexander hopes ultimately readers will close the covers of To Win Her Favor motivated to search their own hearts in relation to prejudice and have the courage to take whatever steps are necessary toward healing the divide. 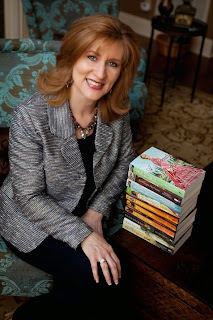 Tamera Alexander is the USA Today bestselling author of numerous books, including A Lasting Impression, A Beauty So Rare, To Whisper Her Name and From a Distance. Her richly drawn characters and thought-provoking plots have earned her devoted readers worldwide, as well as multiple industry awards.

After living in Colorado for 17 years, Alexander has returned to her Southern roots. She and her husband now make their home in Nashville where they enjoy life with their two adult children who live nearby and Jack, a precocious terrier.

“Strong characters, a sense of the times, and the themes of love, friendship, and the importance of loyalty and determination make this a triumph.”
~ Library Journal starred review

“Tamera Alexander is one of my favorite authors, so I expect a lot from her novels. To Win Her Favor is captivating beyond expectation! This novel has everything readers are looking for — rich characterization, page-turning intrigue, a heartwarming romance charged with tension and more!”
~ Cindy Woodsmall, New York Times and CBA bestselling author of Amish fiction

“Rich with historical detail and fully developed characters, this novel held me spellbound until the last page. If you read one historical novel this year, make it To Win Her Favor. It will linger with you long after the last page.”
~ Colleen Coble, USA Today bestselling author of the Hope Beach series and The Inn at Ocean’s Edge

“The challenges and dynamics of the unlikely relationship between a southern lady and handsome Irishman sizzle with tension and passion. . . . A moving story of overcoming post-Civil War obstacles and racial discrimination, readers won’t be able to put down the book until the last page.”
~ Jody Hedlund, bestselling author of Love Unexpected

“To Win Her Favor is a beautiful love story, not to mention a story of faith that shines through in the darkest circumstances. From the very beginning, I lost my heart to Cullen and Maggie and yearned for the moment when they would lose their hearts to each other. Add to everything else a sleek thoroughbred named Bourbon Belle, and this novel quickly galloped its way onto my list of favorite books.”
~ Robin Lee Hatcher, bestselling author of Love Without End and Whenever You Come Around