The Bachelor: Matt: Week 5: Weeding out the Mean Girls

So help me, I couldn't start this show on time to save my life.

I even cooked last night to be prepared to have leftovers and not have to cook ahead of time. All day, I planned to stop work in plenty of time. Then, one of my computers has taken to randomly and sporadically freezing up. Then, I pulled out the keyboard tray on my computer and the whole thing came out. To fix it, I had to get 24 ball bearings put back in place right, then one side fell out, and I had to do 12 of them all again.

Then, I had to catch someone on something work related later than I anticipated. I had to check something else non-work related, and here I am, after heating up my leftovers, fifteen minutes late.

Now, on with the show. 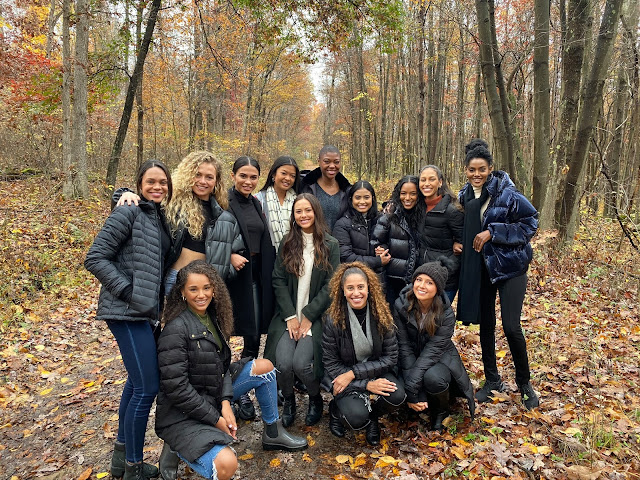 We ended last week's episode with Katie, during the after part of the group date, warning Matt about the mean girl issues.

The next morning, two of the new girls (Brittany and Ryan) are on a walk and pass by Victoria and someone who are talking about the new girls vs. the OGs. Victoria, of course, doesn't like the new ones and thinks they shouldn't be there.

The day then leaps to the cocktail party pre-rose ceremony. When Matt arrives, he addresses what he heard about the toxic culture of bullying going on, and the rumors going around about someone that could ruin someone's life. He says, if you have to make someone feel small to make you feel good, he doesn't want you. He then asks to speak to Brittany.

As they walk away, everyone wants to know who said something to Matt. Anna knows it's about what she said about Brittany, but she doesn't realize it was Katie who told him.

Matt asks Brittany how she's doing. She says it's been rough, but that Anna had apologized to her for telling everyone that she was an escort.

I just took time to answer a work email, and I'm kicking myself.

Matt wants Brittany to know that he takes it very seriously that this was a lie going around. He wants to address it and move pass it.

Anna and MJ are talking. MJ denies there is a toxic environment, and tells Anna she needs to talk to Matt. Matt comes to get her.

The women think it's going to be a long night. I'm afraid it might well be for all of us. Anna tries to tell the cameras that it was an off-handed comment. It was way more than that. Before Matt speaks, Anna starts defending herself. Anna says before she arrived, she started getting messages about another woman who was going to be here. She says she apologized for it and feels horrible. She claims she is breaking out in a rash because she is so sad.

Matt says she's not a horrible person, and he has been in her shoes and had to take responsibility for what she said. Anna cries, but has her teeth showing which is just weird. Matt says he can't see Anna being a part of his journey anymore. He's going to walk her out. He's going to create a safe space.

As he walks her out, he takes her right by the rest of the women. They watch from the windows as he puts her in a car.

Chelsea asks the new women if they think the environment is toxic, because she doesn't think it's like that. Catalina and Michelle say it's been rough. Some women apologize, but Ryan finds it is hard to figure out who is sincere.

Victoria says she's sorry for taking Catalina's crown a few days ago because she was joking. There's a lot of kissing up.

Matt asks Ryan her take on what's going on. She brings up Victoria and her constant digs. Victoria called Ryan a hoe to her face because Ryan is a dancer. She said Victoria apologized in the hall, but only because Matt said something.

Seriously, this is so junior high. Not that the women are hurt, but that the other women are so immature to say these things.

Victoria asks Ryan what she said to Matt. She tells too much. Victoria says she is playful, not malicious.

Victoria calls Ryan fake, then goes off while Ryan is still talking. Victoria thought all was right in the world with her and Matt until these people started saying things about her.

Just took a few minutes to put some dishes in the dishwasher, so this is going to take all night.

Victoria decides it's time to talk to Matt. She says her good is enough to outshine any **** in the house. Victoria mentions what Ryan said, and she says she can find things to work on. Matt lets it slide that Katie was the one who came to him. Now, Katie is going to get it.

Matt says Ryan was crying before he could even say anything. It was like what Brittany had happen about Anna. Victoria said the whole thing about being a hoe was taken out of context. Matt wants to know what context that comment could be made in. He walks off saying he has things to think about.

Victoria is in denial about making the house toxic. She doesn't think Katie is here for Matt. Victoria goes to cry in the bathroom.

Chris calls an end to the cocktail party. Matt wants to go straight to the rose ceremony.

When Victoria comes out of the bathroom, she goes outside with the crew where the rest of the women can hear. She tells the crew she's the best option for Matt, but she's about ready to leave. She's not even being rude, she's serious, especially if Matt believes an idiot over her. The women inside hear it all.

The women assemble in their spots for the ceremony, but Queen V is still in middle of her meltdown we hear her voice overs the whole time Matt gives out roses sharing her virtues.

Matt walks right in, doesn't give a speech or anything, but grabs the first rose.

He gives it to Abigail for being vulnerable.

The next evening, Matt lights some candles and dusts the house before Kit arrives. He makes sure he's dressed right since Kit is a fashionista.
Matt shows her the kitchen and says that it may seem weird, but he usually orders dessert at a restaurant first. They make cookies first.
For her, it's not easy to fall in love. She's 22. I just have to roll my eyes. I was 22 when she was born. (Which is like my grandmother doing a 44/44 thing with me.)
I grow bored with their conversation, but he gives her the rose.
The next day, all the women are sitting around together. There's a knock at the door. All the dates have happened, so what's up?
The card reads, "MJ and Jessenia - I need to know the truth. Meet me at the cocktail party before the other women arrive."
MJ knows she has the facts and the truth always comes out.
Jessenia doesn't know what MJ is going to do. Both women get in the car and don't speak as they head off to see Matt. MJ says, "Big hoops, big hair, big energy... You want to see me fight, get your popcorn."
MJ eats Jessenia out saying she preaches harmony and peace. She tells Jessenia she ought to be embarrassed. Jessenia says MJ was the one who started the JV vs. Varsity, then lied to him. Jessenia says, "I see three sides of you. Who you are at the house, who you are with Matt, and who you are with the cameras on."
Bless poor Jessenia's heart. MJ's hair is bigger than Jessenia is. Their bickering ends for a few seconds, then they go at it again, they are going after it when Matt walks in the door, but tone it down when before he arrives in the room.
Chris Harrison Matt James The Bachelor The Bachelorette