A True Man is Recognized for His Character 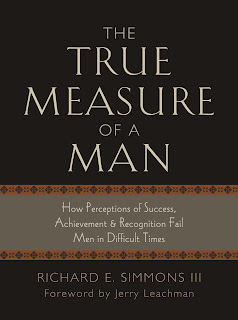 Learning to Assess Your Value as a Man
Author Richard Simmons encourages men
to discover their true worth.

What do people think of me as a man? Do I measure up in their eyes as they see the choices I am making? What will happen to me if I fail at what I do? These are the questions with which men struggle. “Men so often define themselves by what they do, who they know or what they own. And when they do so, they unwittingly set themselves up for great confusion and failure in their personal lives, particularly when a major economic storm arises,” says businessman Richard E. Simmons III. In his book The True Measure of a Man: How Perceptions of Success, Achievement & Recognition Fail Men in Difficult Times, Simmons identifies these fears and seeks to help men find their true worth.

Of all the suicides in the United States, 80 percent are committed by men. These statistics point to the fact that, unlike any other culture, America has placed a man’s worth on his performance and possessions. Men feel good about themselves when they are performing in the workplace and achieving new goals. But what happens after a layoff or a foreclosure? Where is their value then? Simmons helps men to realize that they are worth more than an amount on their paycheck. He deals with their innermost fears, namely the fear of not measuring up. He realizes that every man wants to get to the end of his life and believe that his earthly existence made a difference.

The True Measure of a Man presents new parameters, coupled with a surprising paradox, for assessing the worth of a man. The old measurements simply don’t work when times get tough. Its core message is that it’s more important to build personal qualities that can weather the storms of life than outward achievements which fall short when the bottom drops out. Using a variety of stories, illustrations and quotes, Simmons will provide men with hope, purpose, courage and determination as he encourages them to find their true identity.

Simmons spent 25 successful years with the insurance firm of Hilb, Rogal and Hamilton, where he was CEO for 10 years. While giving back to his community, working with youth as well as advising businessmen and professionals, he discovered that he had a gift for teaching and public speaking. So in December of 2000, he founded the Center for Executive Leadership, a nonprofit, faith-based ministry. And through his years of working with businessmen, he realized that all men struggle with the same feelings of insecurity, isolation, loneliness and fear.

According to Claude B. Nielsen, the chairman and CEO of the Coca-Cola Bottling Company United, “The True Measure of a Man is a provocative and credible challenge to the conventional wisdom of modern man’s value system. Richard Simmons gives us a clear picture of how we deceive ourselves into a false reliance on our own accomplishments to establish our identity and our worth. And he wisely counsels that we are in treacherous territory! Thankfully, he gives explicit guidance to a liberating and transformational course for a hopeful and fulfilling life. This is an inspirational and uplifting work!”

Learn more about the Center for Executive Leadership at www.thecenterbham.org.

You can also click here to request an interview!
Posted by Audra Jennings at 11:08 PM