It began with a lost goat 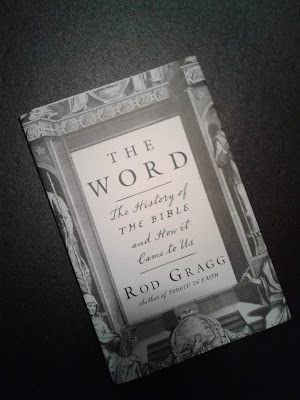 With Christianity under attack in contemporary Western culture and the validity of the Bible repeatedly challenged, The Word: The History of the Bible and How it Came to Us offers a fresh and fascinating history of the Book of Books – which billions of believers through the ages have embraced as the Word of God.
With the same compelling narrative writing and in-depth research that has earned him acclaim for his works on the Holocaust, the Civil War, the faith of America’s founders, the Lewis and Clark Expedition, the American Revolution, and other historical topics, award-winning author and historian Rod Gragg now focuses on the history of the Bible. And he does so with the practiced craft of a historian and the respect of a believer who adheres to the complete and absolute inspiration of Scripture.
The Word provides a sweeping panorama of biblical revelation, preservation and transmission—and the background story of those who devoted their lives – and sometimes suffered death – to translate and transmit the Word of God. In the process, this highly readable narrative likewise follows the history of Christianity and unfolds its unforgettable story with a writing style aimed at the general reader and a level of scholarship that will appeal to history-lovers and serious students of the Bible. A truly unique history of the world’s most popular book, The Word is perfectly suited “for such a time as this.”

The Old Testament
Excerpt adapted from The Word by Rod Gragg ©2018 by WND Books.

In 1947, three young Arab Bedouin goatherders were searching for strays from their herd among the rugged cliffs near Wadi Qumran, which was located about a mile northwest of the Dead Sea in what is now modern Israel. They approached the entrance to a remote cave, reportedly tossed a rock into the darkness, and heard the clatter of breaking pottery. Later, one of them—Muhammad adh-Dhib—returned to the cave and edged inside, hoping to find hidden treasure. Instead, he discovered a cache of large, cylindrical earthenware jars, which contained “some smelly parchments.” The parchments proved to be treasure of another sort: Muhammad and his companions had discovered what became known as the Dead Sea Scrolls, which have been called “the greatest manuscript discovery of modern times.”

From the cave, the boys removed seven scrolls, which made their way to a Bethlehem antiques dealer, and from there to a professor from Hebrew University and an official of the Syrian Orthodox Church in Jerusalem. For a while, no one seemed to realize the significance of the discovery—on a trip to New York City, the church official even tried to sell his scrolls through an ad in the Wall Street Journal, which read, “Biblical Manuscripts dating back to at least 200 BC are for sale. This would be an ideal gift to an educational or religious institution by an individual or group.”

IT BEGAN WITH A LOST GOAT.

Soon afterwards, the importance of the scrolls was recognized by the international scholarly community, religious leaders, and the news media. Soon archaeological expeditions were at work in the Qumran caves—along with more than a few Bedouin entrepreneurs. More discoveries were made in other caves—more by the Bedouins than the archaeologists—and an extraordinary horde of manuscripts was uncovered by 1956, with more caves discovered in 2017. The manuscripts may have belonged to a nearby settlement of the Essenes or another sect, and were hidden in the caves to save them from the invading Roman army during the Jewish war of AD 66–70. Or, they may have been a library. Some speculated that they may have been the library from the second temple in Jerusalem—moved for safekeeping from pillaging Roman troops. The arid conditions of the Dead Sea region perhaps allowed the scrolls to remain exceptionally well-preserved. Eventually, twelve caves yielded almost a thousand manuscripts, including tens of thousands of ancient parchment fragments, numerous examples of secular and apocryphal works, and portions of every Old Testament book except Esther. The Old Testament books date from what is known as the Second Temple period—from five hundred years before Christ to AD 70, when Roman troops destroyed the temple. Although scroll fragments are found in museums around the world, almost all of the Dead Sea Scrolls collection is now owned by the State of Israel, and is preserved and displayed in a wing of the Israel Museum in Jerusalem called the Shrine of the Book.

Since their discovery, the Dead Sea Scrolls have been the focus of continuous study and debate. “Few documents have been more intensively studied, and, indeed, more recklessly interpreted,” observed Edward M. Blaiklock, a twentieth-century classic and biblical scholar. Critics of Christianity rushed to find ammunition to attack the Bible and the faith. The Dead Sea Scrolls posed “a challenge to the Church far greater than was ever presented by Darwin’s theory of evolution,” proclaimed one critic. However, after more than a half century of investigation—scholarly and otherwise—the Dead Sea Scrolls have instead reinforced the authenticity of the Scriptures. The Old Testament scrolls underscored the credibility of modern English translations based on the Septuagint, the Masoretic texts and other ancient sources. Various minor textual questions were resolved from comparison with the Dead Sea Scroll texts, and understanding of the Old Testament text and the New Testament era were both sharpened. The official commentary from an exhibit on the Dead Sea Scrolls in the U.S. Library of Congress in the twenty-first century aptly summarized their value:

The Dead Sea Scrolls, which date back to the events described in the New Testament, have added to our understanding of the Jewish background of Christianity. The fact that they survived for twenty centuries, that they were found accidentally by Bedouin shepherds, that they are the largest and oldest body of manuscripts relating to the Bible and to the time of Jesus of Nazareth make them a truly remarkable archaeological find.