Can God’s best include passion and security? 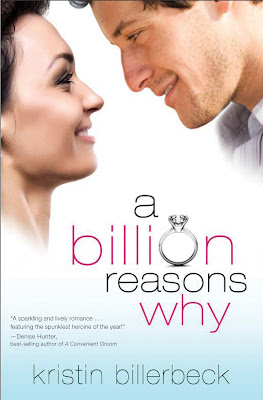 IN STORES TODAY!
Kristin Billerbeck's
A Billion Reasons Why
Practically Perfect...
Can God’s best include
passion and security?
Katie McKenna had resolved to live a quiet life, marry a practical Christian man, and leave all her “worldly” desires behind. Since moving to California, she’d made it her goal to live life logically and for the Lord. She has the perfect life—a fulfilling job, a cute apartment, and a wedding to plan with her soon-to-be fiancé, Dexter.
But then in walks Luc DeForges, the handsome ex-boyfriend who’d broken her heart. After graduating college and rejecting Katie, Luc cornered the organic food market and became one of the most eligible multi-millionaire bachelors. But now he’s back and asking her to go home to New Orleans to sing at his brother’s wedding. She hasn’t fallen victim to her emotions since leaving New Orleans, and she’s invested too much to give into them now.
When Luc was in his element, there was nothing like it. His excitement was contagious and spread like a classroom virus, infecting those around him with a false sense of security. Katie inhales deeply and reminds herself that the man sold inspiration by the pound. His power over her was universal. It did not make her special.
Katie’s boyfriend, Dexter, is a practical man. As Katie’s roommate Eileen offers, “Katie, no matter how many entries you put in that book, Dexter is not going to be a romantic. I mean, fine, you’re going to marry him. He’s a good man. I just don’t want you to be disappointed. No matter how many junior high school hearts you draw next to his name, Dexter is going to order you what the Internet says is the proper gift for each anniversary. He’ll probably have a program created that does it for him.” But Dexter is safe. He’ll be a good dad. He’s very intellectual. He’s punctual. He’s everything she needs in a husband.
And Dexter will propose as soon as she gets her grandmother’s ring from her mom. And Luc will provide her with a free trip home for just that purpose. Plus, she needs to go home to New Orleans. It’s her last chance to find out why Luc tossed her from his life like a banana peel off the back of her father’s pickup. Love is a decision. A choice. All the leading experts said so, and she’d decided she would love Dexter in a way that honored and respected him. The way she’d loved Luc left her worn out and depleted, like an empty air mattress. Then what use was she? She’d get her ring and closure as well. Then nothing would stand in the way of her life with Dexter.
But what if God has more in store for her? What if God’s desire for her is a heart full of life? Can the passions she had as a young woman, which led to many of her past mistakes, still have a place in her life?
Kristin Billerbeck is a successful novelist from northern California. She has authored more than 30 novels, including the Ashley Stockingdale series and the Spa Girls series. She is a leader in the Chick Lit movement, a Christy Award finalist, and a two-time winner of the American Christian Fiction Writers Book of the Year Award. She has appeared on The Today Show and has been featured in the New York Times.
A Billion Reasons Why by Kristin Billerbeck
Thomas Nelson/February 2011
ISBN: 978-1-59554-791-0/320 pages/softcover/$14.99
http://www.thomasnelson.com/  ~ http://www.kristinbillerbeck.com/