February 04, 2016
Love at first sight isn’t always the case—especially in Robin Lee Hatcher’s new book, Keeper of the Stars, in A King’s Meadow Romance series. Still feeling the pain of Brad’s death, Penny and Trevor must learn that forgiveness is the only thing that can heal their hearts. And if they do forgive, something beautiful may rise from the ashes of heartbreak.
Celebrate the release of Keeper of the Stars with Robin by entering to win a Kindle Fire HD! Click the graphic below to enter. The winner will be announced on February 16 on Robin’s blog and social media. 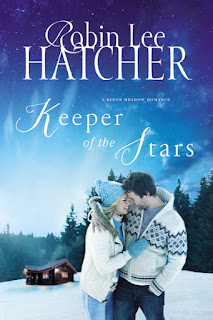 {MORE ABOUT KEEPER OF THE STARS}

(Thomas Nelson, January 2016)
Because it’s not always love at first sight!
When her mother died from pneumonia, Penny Cartwright was heartbroken. But now, after burying her younger brother just 12 years later, she is devastated. Anger, guilt, and sorrow cloud Penny’s mind, and the last thing she wants is to be reminded of her pain—but that’s exactly what happens when a stranger comes to town.
Trevor Reynolds has been chasing fame for more than a dozen years, but his musical career can’t get off the ground. While on the road, an accident kills his young drummer, Brad Cartwright. Trevor wasn’t behind the wheel, but he still blames himself… and so does Brad’s sister, Penny. Now Trevor finds himself in Kings Meadow, determined to follow through on his final promise to his friend.
Still feeling the pain of Brad’s death, Penny and Trevor must learn that forgiveness is the only thing that can heal their hearts. And if they do forgive, something beautiful may rise from the ashes of heartbreak.
Learn more and purchase a copy. Plus read a sample chapter!

Best-selling novelist Robin Lee Hatcher is known for her heart-warming and emotionally charged stories of faith, courage, and love. The winner of the Christy Award for Excellence in Christian Fiction, the RITA Award for Best Inspirational Romance, two RT Career Achievement Awards, and the RWA Lifetime Achievement Award, Robin is the author of over sixty novels.
Find out more about Robin Lee at http://robinleehatcher.com.
Keeper of the Stars King's Meadow Romance Robin Lee Hatcher Thomas Nelson