Thank goodness they are all gone! 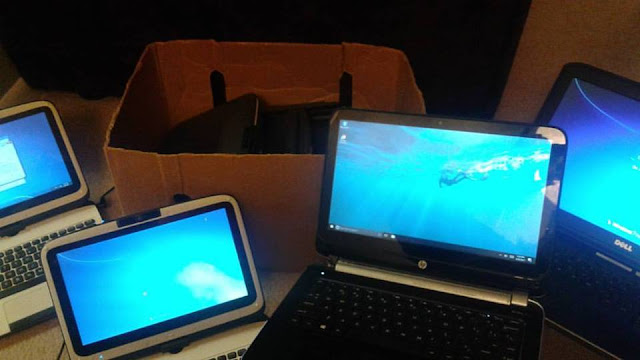 By the time I had gotten through with work on Tuesday, it had already been a long week. Heck, I took a long lunch with Angie two hours after I started work on Tuesday. I had gotten started to work late because Outlook wasn't functioning right on one computer, and I couldn't even get new batteries to make the keyboard on my other to work.

Because I have had boxes of computers stacked on my kitchen table for what seems like an eternity, but actually only 2 1/2 weeks, I sat in the floor and started working on going through the latest batch. I'd had enough though. Tuesday night and Wednesday morning posts on Facebook begged for someone local who wanted to buy a bunch and work on them. I'm just over it. Forget trying to get more together for a classroom to use for someone else to tweak later.

It was only a matter of time before Mom started complaining about the stacks in the garage that needed to go.

About 3:45 PM,  I posted on Facebook in the marketplace and cross-posted on Buy/Sale/Trade groups. Within 15 minutes I started getting people asking. The second person that asked wanted to come 30 miles down the highway to look at them. I had to load the boxes upon boxes that I had in the car and get them over to Mom and Dads. By 5:30 PM, they were claimed, and we were getting them loaded up to head off to someone else's garage. The guy said he would have something to work on for the next 6 months. I ended up making some money, and he thinks he'll make his money back.

I did end up saving a little laptop out of the deal for me. I'm sitting here typing on one that looks like it got caught in a garbage disposal. It works, but it has some pieces missing out of the case and looks like someone try to pry the front edge of the keyboard with a can opener. However, I will be able to use it to connect to the internet out in my craft studio to do quote searches on Pinterest and look up pictures on my website to try to copy something.

One thing is for sure, I am glad to be out of the laptop business!
computers