If today is any indication...

It was a blur. It wasn't the year I planned, that's for sure. I didn't expect a job shake-up. However, I can say that going freelance and joining a publisher's team has been a positive. I haven't achieved the right balance yet, but I hope to get a better grip on that in 2019.

I found myself over-committed in 2018. Once I did have the job change, I planned to make more time to give myself some breathing room and work on my crafting business throughout the year. Until Thanksgiving (3 days that actually found me out of town at a craft show) and two days at Christmas, I really didn't have any down time. My getting ahead on crafts never happened.

I set out the year with the word "better." Just try to do everything and be a little bit better. I shared that I chose that word with someone lately, and that person said that sucked as a "One Word." I guess it did. I really feel like I was probably "worse" in everything I said I wanted to be better at. I dare not open that journal where I wrote down what I'd like to be better at.

2018 ended with getting this in the mail: 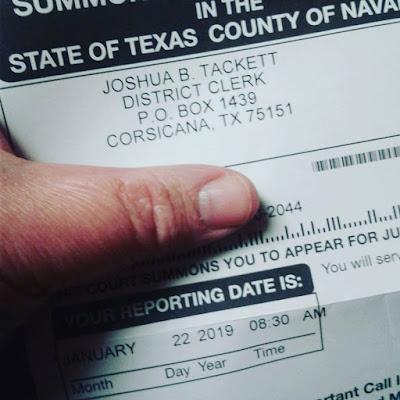 Jury duty is something to look forward to in 2019. That's actually better mail than I could have gotten. I'll get back to that later too.

So 2019. I started the day getting up late. I've noticed I do sleep later with my weighted blanket. I actually think that's because I've just been going to be really late. I woke up at around 2:30 AM with a stomach ache and when I tried going back to sleep, I was hot, so I kicked the blanket off.

I decided not to take down my Christmas tree and instead work on my last quarter sales taxes. Still work, but not PR work on the day I gave myself off. I worked most of the day yesterday to try to catch up in hopes of maybe taking Friday off to go to Canton. That plan has already changed. Anyway...

However, before I could do that, I spent some time troubleshooting a problem with Gmail and Outlook not getting along. I finally, without any help from tech support forums, decided this was a result of a stupid Gmail email about secure accounts from Sunday night. I spent way more time than I wanted on that, but have it fixed so I can start off tomorrow in a productive manner. 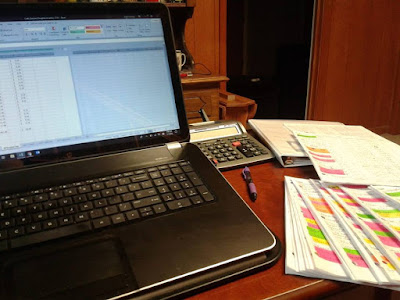 When I finally got down to business, I got some miscellaneous sales entered into my Excel and just one of nine of our fall shows. That was when my brother called that my sister-in-law needed to borrow a computer because her iPhone decided to malfunction in the wee hours of the new year.

I haven't used iTunes on my computer in so long, it had to be updated first. Then, we spent hours upstairs trying to get the phone to either update or reset her phone. We did take a break to eat at my parents' while a 54 minute update was going on. After all that time, it still didn't fix the phone. It's still off and won't do anything. I didn't do much of the troubleshooting work, but I felt like I was because I hate dealing with technology problems. I had just troubleshot my own issue. It's all so frustrating.

I wasn't planning to take down my Christmas tree today. I was going to leave that for after work later in the week or the weekend. However, while we were hanging around upstairs, I got all the ornaments off, sorted and boxed. Three of nine strings of lights have been unstrung and the top three layers of branches have been removed and piled up in my floor.

Those are still laying in the floor. I'll finish that project in the next couple of days.

I came into my living room to settle for the evening and heard from a former co-worker (see first of the entry) that she had gotten a letter from the IRS (see, worse than a jury summons) about an issue I may hear from them on too. It's not anything she or I did wrong. We filed our taxes correctly. It's a long story I won't get into. It's just a pain. I need to call my CPA tomorrow.

I also need to get up early to get my car out to the dealership for a recall software repair and oil change.

I need to go to Office Depot and hope that their print department is going to have a better year and not bind my children's book galleys backwards. I hope they have also gotten in some new bubble mailers in the past couple of weeks. When I was out there last, they had not restocked from the last time I had to get mailers in October.

Once those are ready, I have to print out labels, and I can't do a mail merge between Excel and Word to save my life. Literally. I always have issues. Plus, the Mac I use for my publisher job will not communicate with my printers at all, so I have to email myself back and forth to get what I need on a computer that will print.

That means I also get to go to the post office! Yay!

I think I'm going to have to skip Peyton's basketball game I first learned of on Facebook today. I just don't think I can pull it off.

I need to close this post now. Though not a resolution, I was going to try to be in bed by midnight tonight. It's 11:43, and I need to take a shower and wash my hair after I log-off. I don't think that's going to go as planned either.

To heck with all plans! Just go along with whatever happens.