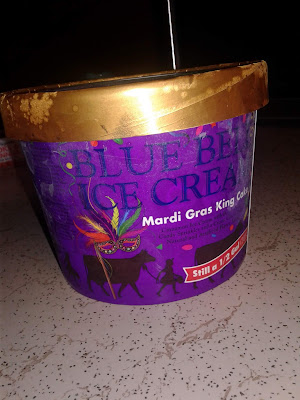 A few weeks ago, I saw on Facebook that Blue Bell had a new ice cream flavor coming out. Mardi Gras King Cake. I'm a believer in trying most (not all) new flavors of Blue Bell as long as pumpkin, gingerbread or marshmallows are not involved.

It is described as, "A Mardi Gras inspired dessert made with a cinnamon cake flavored ice cream, tasty pastry pieces and a colorful cream cheese swirl with festive candy sprinkles."

You had me at cream cheese. The sprinkle are purple. I loved cheese crown (danish) ice cream in Cincinnati. This has to be great, right?

As I've eaten more of it (because I'm not going to throw it out), it's grown on me some. However, the texture is funky. The cream cheese doesn't swirl either. I wouldn't buy it again. I'll stick to Pecan Praline and Cream which shall forever be my favorite.

And in case you were wondering, no, they don't throw a baby Jesus into the ice cream bucket.
Blue Bell ice cream King Cake