What would Marie Kondo say?

January 26, 2019
Thanks to the Marie Kondo series on Netflix, everyone on Facebook is going on and on about tidying up. Every weekend for me has turned into a new mess to tidy up. However, it's not from eliminating anything.

What's kind of funny is that in all my circles all the memes are about Marie Kondo saying you should only have 30 books in your house. Existing among book lovers, you know people are disagreeing about that part.

I added to my hoard this week by something like 240. 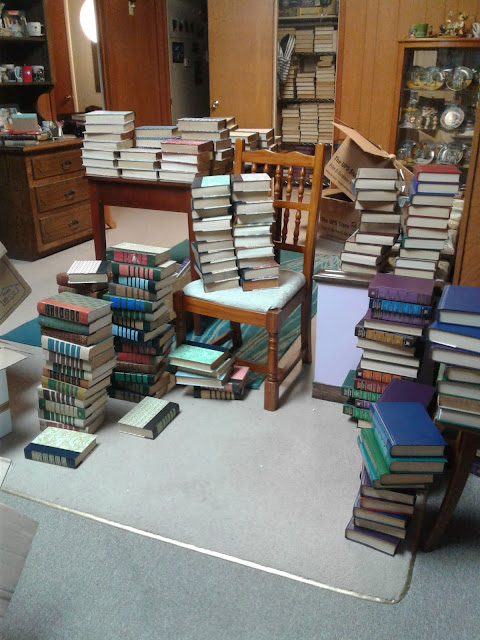 Because I was looking for solid books and Dad was being antsy about it, I ordered 73 on an "Or Best Offer" auction on eBay. Those arrived by mail on Friday. They'd been in transit for probably close to two weeks.

Sometime after I bought those, one of the libraries my parents had stopped by and talked to contacted me saying they had some books. I thought I was going to have to buy those (at a good price), but they decided to give them to us. What started as, "Oh we have 50-60," and moved onto, "There's 70," ended up being 170. After sorting them by pattern and color so that I can find special requests (and mostly because I am OCD), I have books EVERYWHERE. I also have cardboard boxes I need to break down. I already had a stack of boxes I hadn't been able to fit into the recycle can from cleaning up the art studio last weekend.

My house is a mess again! Every time I get it straight...

Oh, and I forgot to mention there's a man who's going to give us who knows how many in exchange for a couple of cut books. I have no idea where those are going to go.

Have I mentioned this year we are only doing one spring show, in April, and won't be doing anything else until October? These books aren't going to disappear quickly.
Marie Kondo