The youth of today... don't they have parents?

January 14, 2019
It's time to blog about what's wrong with our nation today, and it has nothing to do with politics. Why am I watching this again?

Yes, it is time to join in and watch The Bachelor. Yes, I sound like the old woman Demi thinks I am. 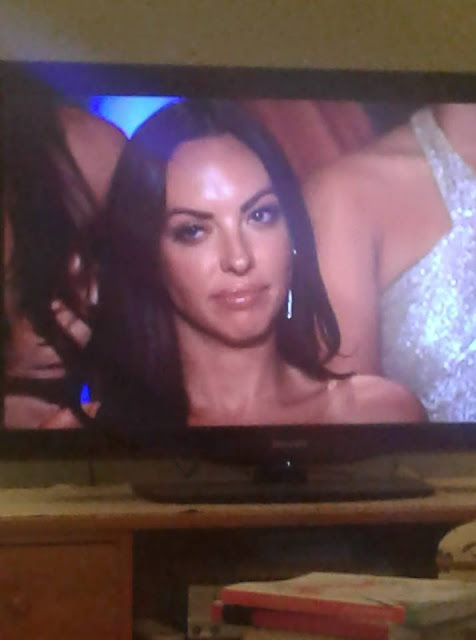 And this is the expression of all of us old ladies as we watch. Just like Tracy's.

Colton wakes up a little nervous on the day of the first group date. It's not going to take long for the girls to get viscous.

So, this group includes the oldest woman, the first impression rose and the woman who brought her dog. They head off to a theater where they are greeted by Megan Mullaly and Nick Offerman. They are going to share some stories about memorable firsts. They were bleeping innuendo. Literally. Lots of bleeps. Lots of suggestive vagueness.

Megan and Nick coach the women on their stories. I think this is a horrible idea. It's going to get crude. It's probably going to be more than the 200 in the audience want to or need to hear.

Colton gets up and shares his story of telling someone for the first time that he was a virgin and finding acceptance.

Elyse gets up and talks about dating a man 13 years older, and this time she is dating a younger man for the first time.

Nicole talks about dating white bread for the first time.

Hannah G. talks about getting the first impression rose.

Onyeka calls out Catherine. Catherine slams Onyeka in her story.

Demi talks about going after she wants and goes out to the audience to kiss Colton. She declares on stage she will get the first group date rose.

Back at the mansion, the next date card arrives. "Hannah B. ... True love is on the horizon."

And it's her birthday! It's her golden birthday. The best birthday ever. Her caption says she's 23 (turning 24), so I'm not sure how golden or what that means. I guess 24 carat?

That night as they gather for the latter part of the group date, Colton thanks them for being open and vulnerable. Tracy wanted to go first, but Demi scooped him up first. Colton tells her the kiss was a bold move and that he appreciated the boldness. He gives her another kiss.

Tracy says she didn't want to force a kiss, that she wanted him to initiate it. She wonders if their conversation might be over.

Demi comes back from her conversation and claims the rose as her own. This makes Tracy sick at her stomach. Onykea asks what Colton thought of her kiss earlier and if he brought it up. "He loved it, duh!"

Colton and Eylse talk... Colton was impressed. Elyse tells him all the girls 27 and above have a room at the mansion together they call the Cougar Den. He doesn't seem to mind that she's older than he is.

Onyeka and Tracy are hating on Demi over on the side. I have a feeling Onyeka is going to be hating on a lot of people. Not that she was wrong last week or this week, but still.

Tracy confronts Demi on how rude she thought the rose thing earlier. No one thinks it should be touched until Colton hands it to someone. "Tracy had a frowny face on. Haters gonna hate," Demi tells the cameras. She feels there is no advantage for the older women.

Hannah G. talks about the connection they have already. "There's just something about you that reminds me of home," Colton professes. Kissy kissy. Demi is peeking over the booth where she is sitting to spy on them.

Demi thinks that Colton needs a more dominant girl that challenges him and makes him nervous. None of the other girls have the balls according to her.

Catherine has had some bad plastic surgery.

Nicole shares about her twin brother who is autistic. She's ready to marry him now.

Colton is ready to give out the rose now. He gives it to Elyse. Demi is disappointed and in disbelief. Nicole, too, is in disbelief. Tears. Really?

He drives them out in an old Jeep and go horseback riding.

Back at the house, Caelynn talks about how she and Hannah B. used to be friends and room together, etc. at pageants. However, Hannah flipped when Caelynn got runner-up and Hannah didn't place.

They ride out further into the desert and find a hot tub. The voice over is about Hannah doubting herself when everything is not perfect. They sit down to drink and each have to make a toast. Hannah gets uber nervous. She says she may get really quiet, but she doesn't want to be someone she's not. It's kind of cricket chirpy. It's not going the way Colton thought it was going to. It's not flowing like he thought it would.

Hannah thinks it's probably the most romantic date she's been on. He tries talking to her, and she stops him to dig an eyelash out of his eye. Like dig. Colton talks to her about seeing she's uncomfortable. She looks really sunburned from being out there. Probably should have used some sunscreen.

Before the date, Colton had no question about Hannah getting the rose. Part way through the date, he's not so sure.

They start the evening portion of the date with Colton making a toast about opening up.

Then the conversation dies after she says it's her best birthday ever.

So, to break the ice, it's a question about the big V. Can we talk about something else? She talks about how she planned for that, then that changed. She awkwardly thinks she's sharing everything now. Still awkward.

Back at the house, Heather talks to someone about never kissing a guy before. Then, the next date card arrives.

I think that leaves Annie and Angelique without dates.

Ultimately, at the end of the night, Hannah B. does get her rose on the date. I would have sent her home because she's annoying. In her interview with the producers, it's all about her best birthday.

The night ends with kisses under the fireworks.

The next day, the girls arrive at Camp Bachelor. There's rousing games of Duck, Duck, Goose and Badminton. Then, Billy Eichner arrives. With a comedian there, it will get crude again.

The girls are divided into two teams. The losing team will go back to the mansion. The winning team will have an overnight camp out date.

The first competition is a relay race starting with an egg on a spoon race followed by wheelbarrow races, then a three-legged race. (Red wins.) Then, there's a canoe race. (Yellow wins.)

The final competition is a tug of war. Red team wins. The yellow team walks away upset they have to head home.

The red team was Alex, Katie, Heather, Cassie, Caelynn and someone. Not even sure. They are going to run together for a while.

The first person we see him talking to that night is Katie. They talk about both being competitive. She tells him if he ever doesn't see anything with her ... That's when he goes in for a kiss.

Cassie and Heather are talking about Heather not being kissed.

Colton comes and gets Heather to talk. She starts off asking about how he talked to Becca about the whole V thing. She breaks out and shares her news. He knows it's not easy to talk about. She doesn't want him to think she's not ready for a relationship. Normally this would be kissy time. Instead they hold hands. She would have gone for it, I think. He's just not going to take advantage now.

Bach at the mansion the Hannahs are talking. Miss AL is afraid Miss NC might screw things up for her.

Speaking of Miss NC, Caelynn spills her story about being hospitalized as a child and almost "passing away." They kiss and it wasn't even a moment that seemed all that

Heather gets the rose and a hug when the time comes. He then walks them all to their cabin.

We come back from commercial with another shot of Colton taking a shower. I think we are just shown the same shower over and over.

The girls are all primping for the cocktail party and rose ceremony. Demi thinks the older women are nervous trying to figure out what to do with all the younger threats. Older being 31. At 23, I know that seems old. Wow, though, they aren't old. Those other girls are just young.

Courtney gets her time in first. They talk about her leading the yellow team. She gets her leadership from being the oldest of 5 children. Her youngest sibling is 2.

It's the night of the eyelashes. Someone else brushes one off rather than digging it. Several women chat with him before Tracy (the oldest one there as she points out) has her turn. Everyone watches as Demi struts around in her robe. He cuts his conversation with Tracy short when Demi arrives. Tracy wants to kill as Demi lead Colton past everyone upstairs to her fantasy closet. Someone asks if she has parents. Guess even they think she wasn't raised right.

Tracy is pissed and locks herself in the bathroom. Meanwhile Demi gives Colton a back massage.

When Demi returns, all the women kind of get after her. For the second time in the episode, one of the women gets the order of "Rock, Paper, Scissors" out of order. Seriously. Paper, Scissors, Rock.

Demi goes to kiss up to Tracy even though she really doesn't care.

Moving on, it's rose ceremony time. Elyse, Hannah B. and Heather already have their roses.

That means the women going home are Angelique and Annie who did not go on dates this week along with Alex B. and Erika.

The previews for next week show more jealousy coming out and the season previews have Colton jumping over fences to escape.

We'll see if it's as interesting as the previews "promise" to be.