Survivor: Winners at War: Pay attention to who you are talking to 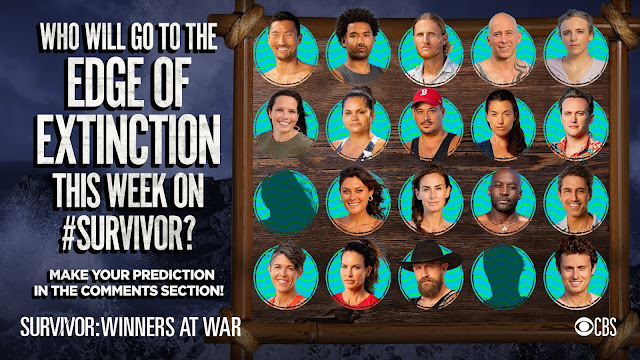 This week it only took me until Saturday night to watch and write up a post. I was going to do it last night, but I got to dozing while trying to finish off part two of last week.

I told everyone last week that I was behind on everything these days and that it would be random each week with when I got to post.

So we ended last week with Amber getting voted off, bequeathing her fire token to Rob and heading off to Edge of Extinction.

Amber says she would be super depressed if it weren't for EoE because she didn't come all the way out here to go home this early on. She's not done. The game is still going for her.

It looks like she and Natalie might freeze to death on EoE though. They look really cold. (And now I need to go turn up my heat.)

The morning after tribal, Rob finds a fire token in his bag. He knows this isn't good. It was hard for the two of them to leave their four kids at home, so he knows that is weighing on her. He doesn't know for sure that Amber was taken out first, but he doesn't know who else he would have gotten a token from. The other option in his mind was Sandra. They just spent 36 days together as mentors.

He has nooooooo clue that Sandra is out for blood. His blood.

Ben decides he needs to up his social game by teaching people how to find idols. It works. Denise finds the immunity idol. The idol they find is a double idol. She has to give the other half to someone by sundown, and it only works when used together. Instead of Ben trying to get her to share it with him, they try to draw someone in with them. Denise goes to Adam and tells him. She doesn't plan to give it to him either. She asks him about giving half to Parvati. Like Adam, I ask, "WHY?"

Adam does convince Denise (for the moment) to give him half, but she says something about him giving it back when asked.

Meanwhile on the other beach, Yule is trying to figure out how to get fruit out of trees with Kim. Kim wanders off to go idol hunting since she is on the bottom.

She finds the same kind of immunity idol that Denise did. She barely covers her tracks when Nick and Tony wander up on her. She plays it off as looking for firewood. She recruits Sophie to gather wood with her, and tells her about the idols. They hide idol and head back to camp with the wood.

Sophie thinks Kim just made a huge mistake telling her. They haven't worked together before, and evidently, even with this gift, doesn't plan to. Sophie thinks Kim should have invited Tyson to go gather wood. Of course, Kim doesn't know she's sought after an enemy.

Out on Edge of Extinction, Amber and Natalie read a new clue they have to figure. Natalie knows that there's going to be bartering involved. They basically scour the entire island. They don't think they've found anything and kind of give up for the day. That's until Natalie looks down in the well. It's an advantage she has to sell to someone for a fire token.

She sends the message to Jeremy. The advantage is that the person can leave tribal without voting, yet at the same time, they can't be voted out either. He's going to send the fire token back to Natalie. He's realized that using fire tokens to buy tarps isn't what it's really all about.

Tony and the red team build a ladder to try to get up in a tree. Everyone, especially Tyson, thinks he's nuts and going to fall to his death. As the ladder starts to fall apart with the first step, everyone laughs at him. Tony swears he designed it loosey goosey on purpose. He gets the fruit, so maybe he does know what he's doing.

Sarah is trying to keep her distance from Tony so everyone doesn't think they are in kahoots. Tony promises the "Cops R Us" alliance is going to actually be an alliance this time.

When everyone gathers on Day 6 for a reward and immunity challenge, Rob's fears about Amber are confirmed. Everyone on his team looks to Rob. Jeff asks Rob if that was a move towards him since they are a couple. Steam almost comes out of Rob's nose and ears.

Today's challenge involves a cart, and a chest of puzzle pieces. They have to move the cart and chest through a series of obstacles before building the puzzle. The winner gets a Survivor Spice Kit.

The teams get three sets of keys and chests at an even pace. Each team has seven participating and two watching to do the puzzle at the end. The red team has Sandra and Sophie watching. The blue team has Rob and Denise waiting in the wings. It takes the blue team longer to get their card back together and back on the course, so they are behind by the time they get to the puzzle.

Sandra and Sophie have a head start and have almost a fourth of the puzzle done. Rob and Denise make up quite a bit of time though and even things back up. S&S go after the next set of pieces while Rob and Denise are intentional about dividing out and organizing pieces. Rob may have led them astray. S&S pull way ahead.

Rob screwed up, and he knows it. Ethan at one points sits down, defeated. Parvati knows that the old school people are outnumbered by the new, so one of the newer players has to go. It's time to go back to camp and decide who.

Ethan tells Rob to his face he sucked today. He laughed after. Rob feels secure in his relationships. Jeremy and Ben are on his hit list. He talks to Parvati and Ethan in view of Danni and others. Danni thinks she may be targeted since she's being left out. She shares this concern with Ethan and Ben. Danni tells Ethan she is isn't sure what's going on with Parvati and her conversation with Rob was short. Ethan asks Danni if she realizes that she's talking in front of Ben because that kind of ruins thing.

Ben tries to bring Ethan, Jeremy and Adam together. Danni tries to get Rob to team up against Parvati. Rob agrees, but you know that's a lie.

Adam is psyched because the old school are turning on each other. He's all about Rob's new idea of voting Danni out.

Are you following? Parvati hears about Danni's plan and is on board to get Danni out.

Everyone starts scrambling. Adam, Michelle and Jeremy decide they can blindside Parvati.

When they arrive at Tribal, Adam can't even get his torch in the rack. Ben has to help him.

Off the bat, when discussion starts, Rob talks about his wife being sent to Extinction. Jeff asks Ethan about the challenges of an old school player. Michelle says that reading people is hard now matter how long ago you played.

The whole old school vs. new school discussion comes up, and Ben tries to explain all things going on. Ben says Ethan, Rob and Parvati have been running around all day talking to everyone. They pointed out so has Ben. So has everyone. Discussions between everyone have taken place.

Rob leans over to start talking to Jeremy. Parvati and Rob talk, Parvati and Danni, Rob and Ethan, conversations between all sorts of pairs come up.

Ben is still talking and yammering on. Ben brings up the word idols. He says he isn't looking for idols, but can help people look for idols.

Rob asks who has idols. "Let's find out who has idols." Rob reaches for his bag and goes through it. Everyone pulls open their bags and empty them out. Denise is very careful to hide hers. Cameras pan to her trying to be discreet.

I'm really not sure how this is going to shake out.

Jeff gets the votes, says his line about if anyone has an idol and wants to play it, this is the time to do so. No one pulls out an idol.

Danni takes out her fire token and puts it in Denise's box. Off to Extinction she goes.