Survivor: Winners at War: Way Too Much Talking

February 26, 2020
It's actually late Friday night when I am typing this up. After work, I went to see Frozen Jr. since one of the girls on my church puppet team played Middle Anna. When I got home, I got distracted by finishing something I was watching and updating this week's post from The Bachelor with GIFs that  now I don't know if I can keep my eyes open to get through Survivor, but I'm going to try. 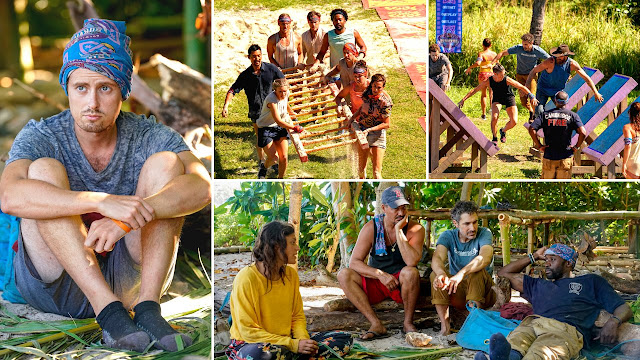 This week we pick up with the morning after the last tribal. We hear Adam talking about how the old schoolers have been in control. He thinks Boston Rob needs to adapt and play like he is. I'm not sure what Adam's game has been up until now.

Adam talks to Denise about getting rid of Parvati next and teaming up with Rob and Ethan. He says that Rob trusts him. I don't know where he gets that either.

Ben says he can't work with Rob anymore (and can't stand him because he's an alpha male). Michele thinks Parvati is out for blood. This is a whole lot of voting off talk when there's not an immediate tribal council coming up.

Ethan thinks Adam blew it by telling him the Parvati plan.

Sandra talking about retiring after being here for the fifth time.

Tyson is ready to topple the queen since she's the weakest physically there. Yul doesn't like how Sandra stirs things up based on fear. Yul doesn't really trust Tyson, but could be on board with getting rid of Sandra.

Sandra put out a net that caught a shark. She didn't catch it herself, but she'll sure talk about how great she is for providing shark steaks for everyone.

Tony is nuts and thinks he's going to get shark bit.

Danni tries her hand at spear fishing since they have to fend for themselves out there. After getting a small fish, they get tree mail. Each player gets a picture clue. Amber, Natalie and Danni find a combination lock. Natalie and Danni try, but have no luck. Amber goes back to camp, remembering some numbers on crates.

When she gets back to the lock, that didn't work.

Natalie uses some strand of beads to figure out the sequence of numbers while the others are looking for something else. It works for her. She gets an advantage to sell off for another fire token. Will all the tokens she is collecting get her back in the game?

Back to Sandra's tribe, Sarah finds a note in her bag. It says there is a "Steal a Vote" hidden at the other tribe's camp inside one of the player's torches. This advantage allows her to sneak into the camp to try to find it and then return, hopefully without getting caught. The advantage costs a fire token. So, Sarah is conflicted. She used a "Steal a Vote" her season, so knows how it works when done right. However, she has to sneak away without getting caught on either side. And it's going to cost her a fire token.

That night, Sarah asks fellow cop Tony to be her top secret partner. He tries to cover her face in dirt or ash, but does a crappy job. She makes her way to the other camp via a boat. Ethan is awake when she first gets there and settles back down to sleep. It's very dark and Sarah has no clue what she's doing. She crawls around and finds the torches. She has to stand up and move the torches around to feel in the top of them. She wakes Ben up, but doesn't get caught. She finds it and crawls off.

Day 9 brings about a challenge.

Along with winning immunity, the winning tribe also gets chicken kabobs. When it's time to sit someone out, Sandra sits out again. I thought she sat out last challenge. Must have been challenge before last because you can't sit two in a row. Last time they would have been even on numbers. Anyway, she just sits there looking all smug. She should volunteer to fight for her team, but she's queen.

Boston Rob gets held up trying to toss the rope they need to climb into the thing they have to throw it in, so his team is falling behind. They may be in trouble catching up on the puzzle.

Will Rob redeem himself on this puzzle after losing dismally last time?

Sandra's team seems to be moving slow on it though they got a head start. Rob's team is catching up.

Rob and Michele are keeping pace with Sophie and Sarah while Sandra is pacing on her perch.

Sarah finds where her last piece goes, but knocks two pieces off. Rob and Michele were one piece away when Sarah gets hers back where it needs to go.

Once back at camp, there's a whole lot less talking than a couple of days before. As Rob narrates, these players know what they are doing and know not to be the first to walk off.

When Jeremy leaves, Ben and Denise follow. They think Parvati is the most powerful of the old school trio.

Rob talks to Adam about knocking off Ben. He says, "No." He's not open to Jeremy or Michele either. Adam asks Rob if he will go for Parvati. Rob asks if Adam will protect him later IF he has the numbers. Adam supposedly wants to work with Rob later.

Rob plays along for Adam's sake, but Rob isn't going to turn on Parvati. Rob tells Jeremy and Michele he knows what's up. Rob wants to go Adam, but Michele is worried Adam has an idol.

Parvati says Adam broke the "Cardinal Rule" of Survivor by telling the closest ally of person they want to blindside what is going on. For that reason, he must go down.

So, everyone talks to everyone else about the plans. Michele thinks she and Jeremy have power... take one of the Power Trio out or take out the one playing both sides (Adam). I think they all talk too much to everyone.

And now for tribal...

Jeff starts by asking Ben about their string of losing. They talk about the strategy of how to bond and how loyalties go when a tribe keeps losing members.

Ben doesn't know how to deal with the alliance thing. I'm trying to remember how this guy won.

Ethan is trying to figure out what Ben and Adam are talking about.

It's time to vote.. Then tally the votes... If anyone has an immunity idol...

Rob may hurt someone.

As he leaves, Ethan bequeaths his fire token to Parvati.

Things are starting to heat up! 🔥 @JeffProbst is here to share his thoughts on the latest episode of #Survivor! 🚨 WARNING: SPOILERS AHEAD 🚨 pic.twitter.com/E9Kpsdqx6Q
— SURVIVOR (@survivorcbs) February 27, 2020