Survivor: Winners at War: You knew that one was coming ASAP 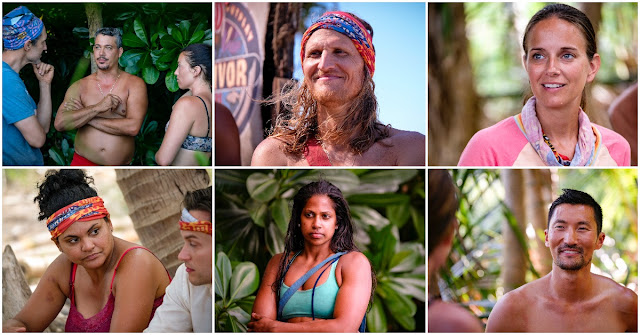 I'm picking up here where I left off last week with the second half of the Winners at War premiere.

When Natalie is voted off first, she gifts her fire token to Jeremy and heads off to the Edge of Extinction. It's a windy night as she reads the welcome note. She learns she'll be able to earn extra fire tokens, but if loneliness overtakes her, she can raise the flag and go home.

The next day (Day 3), The red tribe talks around the well. Sandra is personally offended because on Island of the Idols last season, Boston Rob said he'd never come out here... that he would not play. Now, I don't know why Sandra would believe that. Everyone knows would play again. He may have said it seeing if she would believe the lie, but I don't think he was serious.

Because Sandra is so hurt over this, she is determined to get Amber out at the first chance she has.

Yul tries to collect the one-time players together for an alliance -- Adam, Sophie, Wendell and Yul. They plan to control the game.

On the other tribe, Michele feels on the outs because she didn't know that Natalie was going to be voted out. Ben fills her in that Rob and Parvati have something going on. Rob is trying to act like he isn't in control, but he is.

Jeremy finds the fire token in his bag, making him the possessor of the most for the moment.

Natalie, on Extinction, finds the menu of items purchasable with fire tokens. She digs and finds a bottle with a clue to find a fire token. It tells her to journey to the last place she can see the sunset. She hikes up to the top of the island, and it is quite a trek. She finally finds an immunity idol. It's not going to do her a lot of good on EoE, so she can pick one person on the losing team that she can sell the idol to for a token.

When it comes time for the next immunity challenge, Sandra sits out since her team has one extra person. She ought to compete since she's such a big shot.

For the challenge, each team paddles out to a platform to retrieve number tiles. They have to do an obstacle course to use the tiles to figure out a combination lock to get rings to throw at paddles and whoever raises that flag first wins.

Rob's team hits an obstacle and falls behind. The other team gets their bag un-knotted before Rob's team can get to the platform. He takes control, gets the boat up to the platform and gets the pieces. They almost catch back up, until they get to the barrel roll. The red team seems to have better luck. While the red team does help each other, Rob pretty much has to throw his team over the barrel. He launches one after another while a couple of the other men hold it. The trouble comes when it's just Rob and Jeremy are left. Rob has to get Jeremy on his shoulders to get him over. Then, Rob gets someone to pull him over over.

Dad bod with a beer gut or not, Rob is a beast.

Rob's team is way behind, but Wendell isn't having a whole lot of luck with the rings after getting the first one.

Jeremy is able to pull it off for the blue team.

Since Rob's team wins, it doesn't take much to guess that the Red team led by that witch Sandra is going to target Amber. Amber knows it.

Rob knows it too. And he knows there's nothing he can do to stop it.

The red team gathers back at camp. Everyone wants to know what everyone else wants to do.

Wendell goes to the other group. He says he wants to work with them. Wendell tells Sandra he wants it to be Tyson or Amber.

Sophie talks to Wendell and Kim, then Amber.

Then everyone scrambles with everyone else.

I don't know what Natalie was smoking, but we learn at this point that she has sent the immunity idol to Sandra. Nothing says for sure, but she guesses it was Natalie who sent it to her. Sandra has no problem paying her token for it.

Tony gathers a group to yammer on, and he says Tyson goes home.  He wants to break up the poker alliance of Kim, Tyson and Amber (by connection of Rob).

When all gets silent, Kim knows something is going on, but she doesn't know what. She has to dig in to find out. She's pretty sure that it will be her, Tyson or Amber going home.

It's time for Tribal Council...  Jeff leads them in a conversation, starting with Amber and how different she feels since it's been 16 years since she's played. She's not used to this pace.

Sandra pipes up about how Amber is going to have to pick up the pace.

Kim talks about how she knows her name was on the block because of the poker player allaince that was never a thing to begin with.

After more and more round and round talk, it's finally time vote.

Amber drops her token in Robs's box, of course.

With that, Amber joins Natalie on the Edge of Extinction.

Anyone not see that coming?
Jeff Probst Rob Mariano Survivor