August 15, 2020
I own a frappe maker that I haven't used in quite sometime.
The ones I make never taste right. Probably because I don't add cups of sugar or sugary substances. I decided I would try brewing coffee, adding it to the International Delights iced coffee I'm addicted to.
Keep in mind, I had to buy coffee because I never drink regular coffee. I like a hint of coffee such as in a Frappuccino. Well, actually, when I get them, I get them with an extra shot so I can get more than a mere hint of coffee. 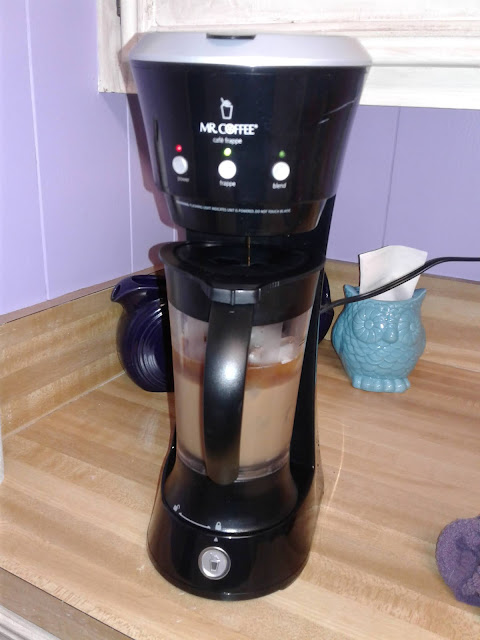 I get it loaded up. I go back to the other end of the house while it brews because I know when the blender starts it will wake anyone in the neighborhood who dared to think that they would sleep late. Seriously, the thing almost gives me a heart attack it is so loud, even though I know it's going to happen.
When I came back into the kitchen, I had put too much of everything into the blender and it was overflowed and overflung all over the counter.
And it tasted horrible. I don't understand how it had no flavor at all. It was mostly frothy some sort of liquid cross between watered down coffee and milk.
So much for my low cost, lower calorie attempt at being Starbucks.
I had better luck with this week's other kitchen creations. 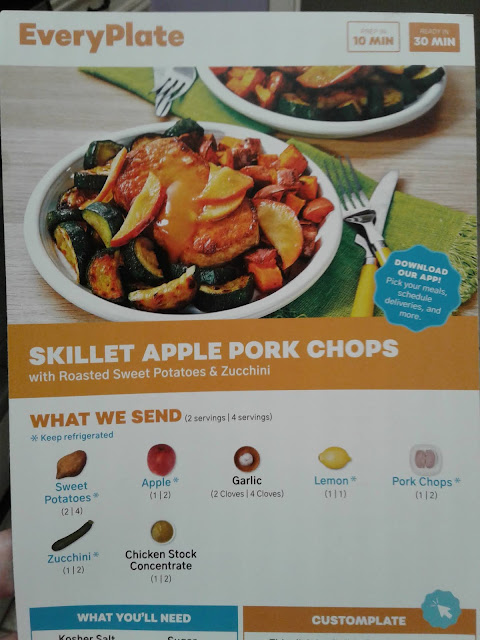 The apples and porkchops were really good! I think the gravy that the apples were in would have been better without garlic. While most people in the EveryPlate group thinks more more garlic is better, I don't think more garlic makes apples better.
I did throw in some squash with my zucchini because a single zucchini doesn't always go very far.
I also don't think that a sweet potato has to be chopped up and roasted. They are a kitchen hazard to cut up raw. I'd rather nuke it in the microwave and add butter and salt. 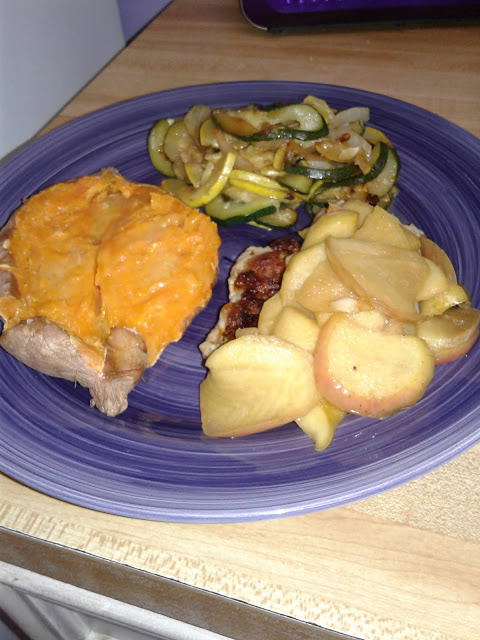 Here is my question about green beans... Why are fresh green beans so... I don't know the word. Squeaky between my teeth? 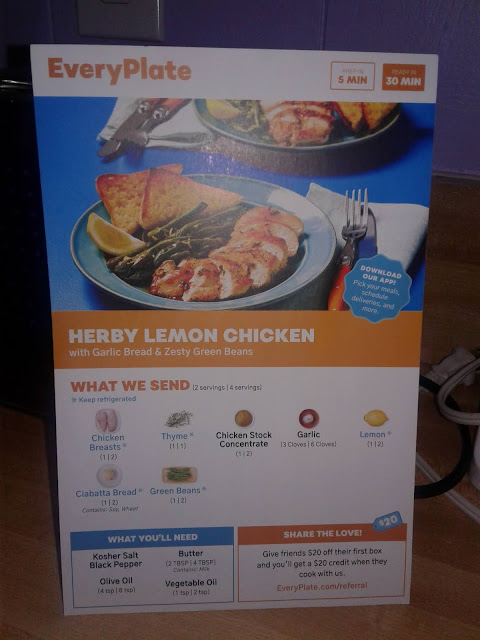 Maybe I just don't cook them long enough. I also don't understand why it's necessary to garlic infuse olive oil to brush onto bread to toast. If you want garlic bread, spread on some butter and garlic salt. It takes less time!
This was my first time to cook with fresh thyme. I felt all fancy!
Since I skipped roasting potatoes for my burger last week, I needed to use some up. The microwave is quicker. Much like the garlic, I don't get roasting everything in oil in the oven. It feels like a time waste as much as anything.
Everything seems to take forever to prep. I just don't have that kind of time or patience, though with some meals it's getting faster knowing the EP routine and recipes better. 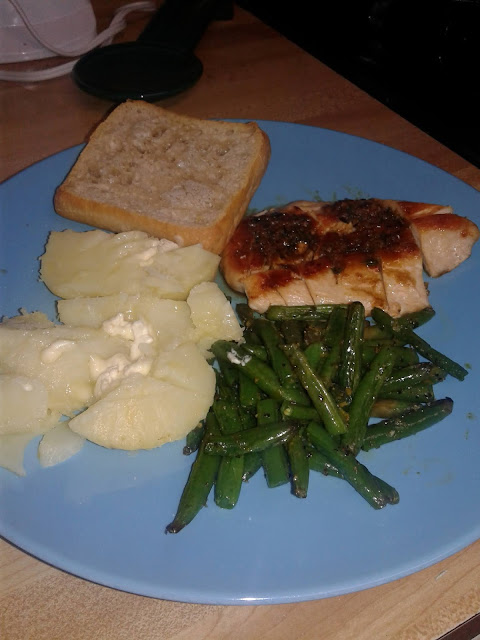 For example, I don't have to follow step-by-step recipes to make a quesadilla. I do enough of that when I cook on my own. Goodness knows, I can make grilled onions. 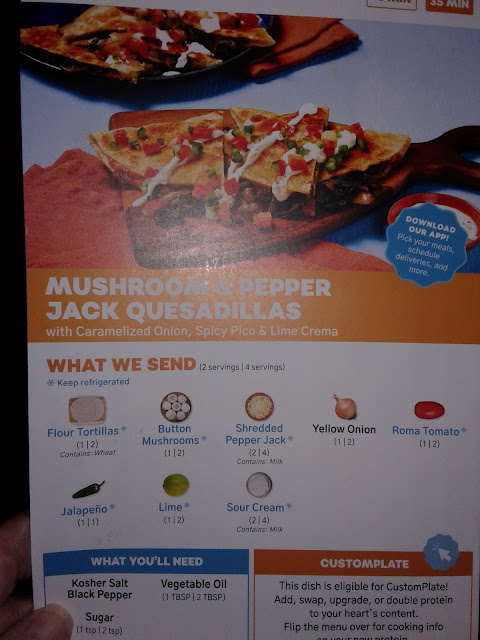 Normally, I can knock back jalapenos too. I realized that I don't usually do them raw though.
While I was eating, I noticed the tips of a couple of fingers seemed burned. I had touched a hot quesadilla when I flipped it, so I thought I just burned my fingers slightly. 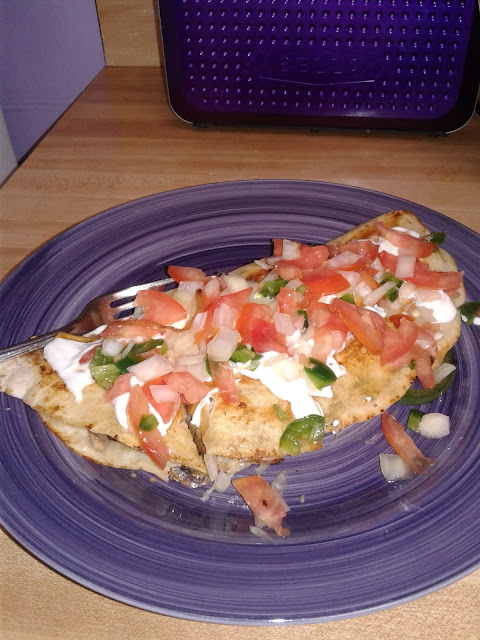 After I took my shower and got into bed, my fingers were burning like I had touched my straightening iron. After posting about it on Facebook and Googling it, I figured out I had pepper hands. (I was thoroughly freaked out in the moment because I had never done that before.)
I also felt that jalapeno burn my insides as it digested. I usually do not have that issue with pico, but that pepper was hot! Next time, I'll cook the jalapenos with the onions. At least it tasted good. I don't normally have mushrooms around for my quesadillas.