When strange things show up at your door

If you have been wondering if I'm truly alive or if the blog is just on auto post with projects, the answer is... I am barely alive, but all I have doing is working on projects. The past couple of weeks at work have been especially insane. I've done little more lately than work and crochet at nights.

To avoid the possibility of trick-or-treaters thinking about knocking on my door, I even stayed upstairs late on Halloween. The only child I was willing to open the door for was this one... and she called ahead. 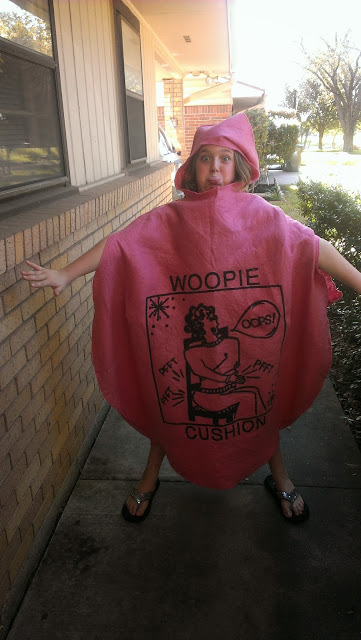 She is the only child I know of who would pick this costume and could effectively pull it off. Only Peyton Kathleen. This gassy face isn't as terrifying as the other picture she had me take.

That was Thursday night... Tonight as I sat on my couch, I heard voices all of a sudden. Then I realized who one of them belonged to as she yelled across the yard. Paige. As I was trying to jump up, the manic bangs on my door begin.

She and some friends were doing a scavenger hunt and wanted to trade a sippy cup for a fork. I told her I didn't know if I had a fork to send with her. I sure wasn't sending one from my complete set of silverware, and I actually didn't have a plastic one. She said I could send a piece of fruit instead, so I sent her off with a pineapple cup.

I don't know what I'm supposed to do with this now. I also don't know which Pixar pictures once graced the outside.

As I read over what I just typed, I realize I can no longer type coherently. I apologize for what insane and unreadable material I may have recently posted. I'd shudder to know what I have published recently.
Posted by Audra Jennings at 8:00 PM