November 16, 2013
The good news is that I didn't procrastinate any longer with the wallpaper project. It is now officially all off except what is underneath the the light fixture itself, so there is a little wallpaper poking out from it. 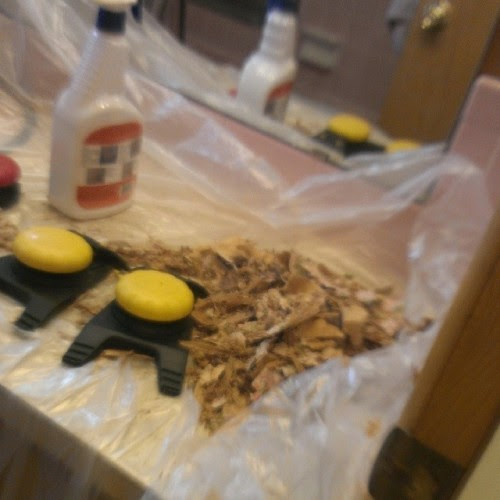 After I finished, I went and bought the texture to go on the walls. I'm not exactly sure when I will get that part done. But, I have it all ready to get started.

The bad news is that this crochet project for my mom's present is NOT ANYWHERE near as big as I had originally planned for it to be. However, it is big enough to be a royal pain in the rear to keep rotating as I am piecing all the hexagons together. 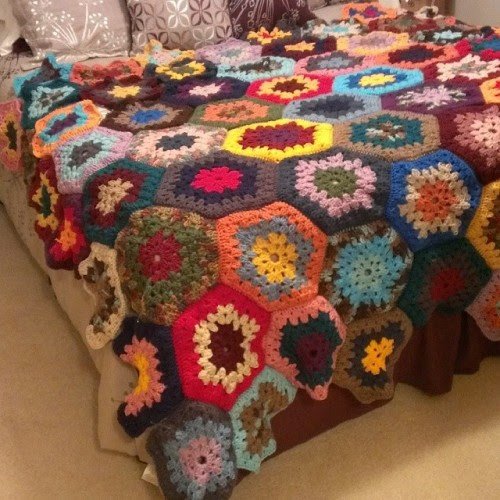 The coloring is off by using my phone camera, so I need to get some better pictures, possibly in another room. I almost have all the hexagons stitched together, but I don't think it's going to get king size bed sized (my original goal). This is a queen bed here. I'm just plain tired of making hexagons for one thing. I don't like to spend so long on a single project and I've been working on this one a while.

Besides, I have other projects I want to finish by Christmas.

Next weekend, I plan on decorating. I want to finish my bathroom by the second Saturday on December since I'm having a party. I need to crochet at least 2 hats. I need to work on a Shutterfly project I would like to have done in time for Christmas (least likely to happen by my self-imposed deadline).

So therefore, I think once I finish the stitching, I'm going to do the edges and be done with it. I'm hoping when I edge it, the floppy edges of the outside hexagons flatten out. It's not that it's been hard, but I just don't see me attempting another one like this anytime soon.
Christmas crochet wallpaper