Sundin brings history to life With Every Letter

September 23, 2012
“By telling this redemptive wartime tale of love primarily from the perspective

of a young flight nurse, talented historical-fiction and romance author Sundin offers
a unique perspective on the lives of military women during this time period.”
~ Book List 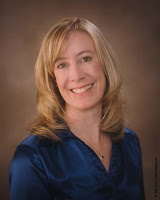 Combining a flair for romance with exceptional research and attention to detail, Sarah Sundin vividly brings to life the perilous challenges of World War II aviation and nursing in her latest release. With Every Letter (Revell, September 1, 2012, ISBN 978-0800720810, $14.99) launches Sundin’s new Wings of the Nightingale series in which three WWII flight nurses will discover friendship, love, and peril in the skies and on the shores of the Mediterranean.

With Every Letter takes place in the fall of 1942, and follows the events of the war, including Operation Torch (the Allied landings in North Africa on November 8). Sundin shares more about the background and research behind With Every Letter in the interview below.

An interview with Sarah Sundin, Author of With Every Letter

Q: All of the books in your last series, and your new release, With Every Letter, are set in the World War II era. What draws you to writing books set during the war?

Not only do I love the clothes, uniforms, and music, but there’s an inexhaustible supply of dramatic stories and settings—a novelist’s dream. This was a time when ordinary men had to do extraordinary things, and when women explored non-traditional roles—while remaining ladies. Plus, I’ve always been fond of that generation. As a pharmacy resident at a VA hospital, I had the honor of caring for many World War II veterans. As a rule, they were cheerful, kind, and chivalrous, with the solid strength of someone who has been tested—and passed. What more could you want in a hero? 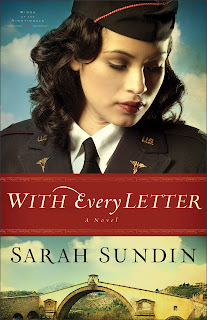 Q: You went to school and trained to be a pharmacist, in fact, that is still your profession. How did you make the leap to author?

I certainly never planned a writing career. In 2000, I was working on-call as a hospital pharmacist and staying home with our three young children, when I had a dream with such intriguing characters that I felt compelled to write their story. That first novel will never be published, nor should it, but it got me started.

However, my pharmacy background has helped me write the Wings of the Nightingale series with its focus on nurses and medical care. Although medications have changed significantly in the past seventy years, the basic concepts remain. Also the hero of the second book in the series, On Distant Shores (June 2013), is an Army pharmacist, so I had fun with that.

I adore research. Often I have to force myself to stop and actually write the story. With Every Letter presented unique research challenges. The story is very mobile, since Tom builds airfields just behind the front lines, and Mellie flies into those airfields. There are twenty-five separate settings in With Every Letter, from Kentucky to Liverpool to Algiers to Sicily.

Also, both flight nursing and aviation engineering appealed to me because they don’t get much attention. On the flip side, few research materials are available. I had to do some sleuthing, which led to some fun moments. An obscure website led me to the grandson of an aviation engineer who had served in North Africa. The man sent me a box full of materials—copies of his handwritten narrative, personal letters to his little daughter, and photographs. Priceless!

Q:  How historically accurate are your novels (locations and events)? Are the stories based on real people?

I try to make my stories as historically accurate as possible. With Every Letter follows the US Army from the landings in North Africa in November 1942 through the campaign in Sicily in the summer of 1943. The 802nd Medical Air Evacuation Transport Squadron was a real unit that flew the first official air evacuation flights, but all characters and stories are fictional. Tom’s unit is based as closely as possible on the actual 809th Engineer Aviation Battalion. However, the highly mobile nature of this story and my desire to place Tom and Mellie together at certain places and times created a plot nightmare. To save myself hours of therapy, I created the fictional 908th Engineer Aviation Battalion.

Q: Is there a spiritual lesson or analogy within the story you hope readers will walk away with?

Mellie has always seen herself as merciful as she cares for the sick and wounded. But story events stretch her understanding of mercy. Both Tom and Mellie learn new depths to the meaning of forgiveness.

Also, at the start of the story, both Tom and Mellie are uncomfortable in their own skins. They both have to learn to see themselves as God sees them and grow into the people God wants them to be.

Learn more about Sarah Sundin and her books at www.sarahsundin.com. She also invites readers to become a fan on Facebook and follow her on Twitter where she shares a “Today in History” feature.


See what folks are saying about With Every Letter!

One fortunate winner will receive:
Enter today by clicking one of the icons below. But hurry, the giveaway ends on September 26th. Winner will be announced at the “With Every Letter” Author Chat Facebook Party on 9/27. Connect with Sarah, get a sneak peek of her next book, try your hand at a trivia contest, and chat with readers just like yourself. There will also be gift certificates, books and a Book Club Prize Pack to be won (10 copies for your book club or small group)!

So grab your copy of With Every Letter and join Sarah on the evening of the September 27th for a chance to connect with Sarah and make some new friends. (If you haven’t read the book – don’t let that stop you from coming!)

Don't miss a moment of the RSVP today. Tell your friends via FACEBOOK or TWITTER and increase your chances of winning. Hope to see you on the 27th!
contest giveawa Kindle Fire Nook Color Revell Sarah Sundin With Every Letter World War II