May 05, 2013
This story has nothing to do with the birds in my own tree. This story is about my whole family's fascination with the robins' nest at my parents' house. And yes, my life and weekend have become this mundane. It gets funny in parts. In the words of Uncle Si, "I'm getting there. Let the story unfold."

Over the past few weeks my parents have had a pair of robins building a nest on their back patio. A couple of weeks ago, we could tell they had hatched with the parental birds flying in and out of the nest. Paige and I kept watching, fascinated for whatever reason two weeks ago.

Mom had taken pictures when you could start seeing little heads. She thought there were three, but Dad and I spotted four on Tuesday. Yesterday, Dad realized something had happened to one of them though.

Today, after church, the girls came home with them and the five of us had lunch. We were discussing how big they were now. As we were finishing lunch, I saw one come out of the nest and start flapping its wings. We all cheered #1 on as he took his first flight across the yard. One of its parents even swooped down to congratulate him and feed him a chunk of worm.

A second one looked like he was going to take his turn, but the same parent bird flew over and gave him a peck settling him back to the nest. The third acted like it was going to take off, but would settle back in too.

Later in the afternoon, Mom saw #2 come out, we ran to the window to see him take flight. Before he did, I decided to encourage it by singing "I Believe I Can Fly." Not sure why I did this, but it was not appreciated. There was just something cool about it. Both parents were ready to defend their baby from a nearby squirrel, then he eventually flew over the fence.

We were cheering on #3 as he flapped his wings, but he seemed stuck. He then went over the edge, but then really was stuck upside down. This freaked us out because from what we could tell, that is what happened to #4.

I tapped the nest from the opposite side with a stick, hoping it would jiggle him loose. Dad came on out and knocked the nest loose so he could get out. He did walk across the entire back yard, but wasn't able to go airborne. The mama bird did fly down to check on it and does know where it retreated to under the wood pile in the corner of the yard. Mom read online that the parents will still tend to them for a few days after they leave the nest, so hopefully it will be cared for until he can fly.

That kind of turned the bird launching a little sad. However, watching the little ones take flight was the absolute highlight of our afternoon.

We went inside where Peyton made Dad, Paige and me hold hands while she sang "Kumbaya" and wanted to decide on a name for the bird. She didn't like my suggestion of "Limpy" or Dad's suggestion of "Paige" (who knows why he came up with that), so she named it Potato. Again, who knows why.

I started singing "I Believe I Can Fly" again, but it still went unappreciated. I think it was lost on the audience because they were too young to get it. 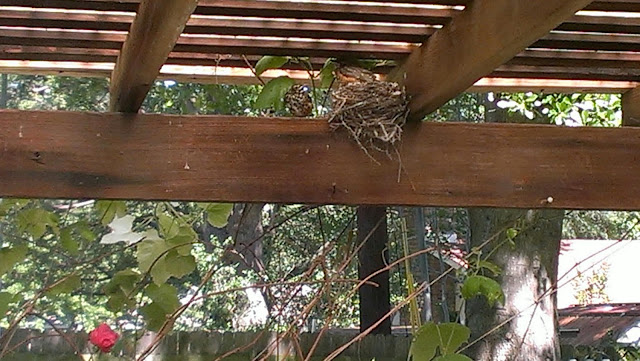