If you are going to give me a hard time, then you better be consulting GPS 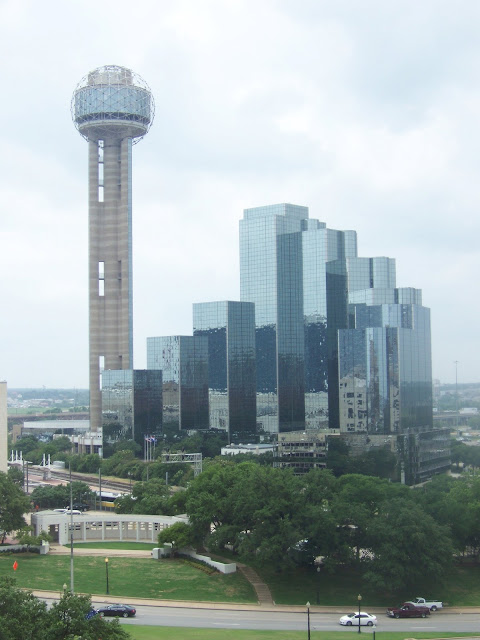 When it is all said and done, I'll have a four day weekend that I've been sort of needing, but definitely wanting. I've not taken a full workday off in a long while. There's been a couple of days that I've only gotten a couple of hours in, but I had intended more than that for sure.

Anyway, I wanted to do something part of the weekend, and chill out the rest. Friday was our out and about day, but the rest of the long Memorial Day weekend is dedicated to the memory of my mom's Aunt Eula Mae that passed away overnight/early Friday morning. That makes it a long weekend in a whole other way. I sure will miss her!

But, back to part 2 of our Friday adventure...

I'm the Dallas driver among me and my parents. However, downtown Dallas within the confines of I-45, I-30, I-35 and Woodall Rodgers confuses the heck out of me. I hate trying to get most anywhere downtown because of the one way streets and the random street that crosses the others that isn't a N/S or E/W street. And I hate the stoplights on the sides of the road where you have to look off to the side to see if you have a green or red light.

We drove in a couple of circles trying to get to the museum, specifically parking. No help from my parents. And every time I get close to destination and am looking for an exit or turn, I for some reason need to go to the bathroom, and that only serves to frustrate me more.

At least I easily found my way to El Fenix to eat. One thing's for sure. I know how to find El Fenix.

Afterwards, we made it down to the Farmers Market without much trouble, but when we were leaving, I had a heck of a time driving around the blocks trying to find the quick way to the highway. I was thinking the street we were on was a straight way to the highway - if you went to the right. The ramp leading to the highway was to the left.

I still stand by the fact I was not LOST. I just couldn't not find a way onto the highway. We pull up at one light under a bridge and sit stopped when I finally realize we are stopped behind a parked car because stupid downtown streets, you have a lane you can drive in one minute and a lane you can park in the next. OH, my dad would NOT shut up about being stopped behind a parked car even though I am the one who realized it. After driving through a couple of questionable neighborhoods, we finally found signs to get us back on the right road.

At this point, I cannot operate my phone to figure out where we are and how to get on the highway from where we were at the moment. Neither has useful advice which irritated me to no end, and neither of them could operate the GPS on my phone to help me out.

Plus Dad pestered me the whole way home which only served to make me mad. Then it made him mad that I spent 15 minutes in Starbucks on the way home because everyone and their cousin was there.

However, my brother did something that got a bigger laugh that night.

We rushed home to get to Peyton's softball game which was an hour and a half later than we thought (we were rushing to find our way home to make the game), and then there was a rain delay for the first game. We hung out in the parking lot for a good while. Brian had been standing at the truck talking to us before the game for over thirty minutes. Next to my parents' truck was a jeep that had evidently been mudding and there was dried mud all over the bottom, especially the step-up rails. Brian decided to be "helpful" and kick off a mud clod.

I so wish that I had a picture of his reaction as the alarm on the jeep blared from his kick. We all laughed so hard we were almost in tears. It kept going and going and going. You may have had to have been there, but it thankfully took the hilarity (or lack thereof) out of my stopped behind a parked car episode. It least I didn't get caught kicking someone's car.
Dallas Dealey Plaza