The Rangers won, but I didn't get to boo Josh Hamilton 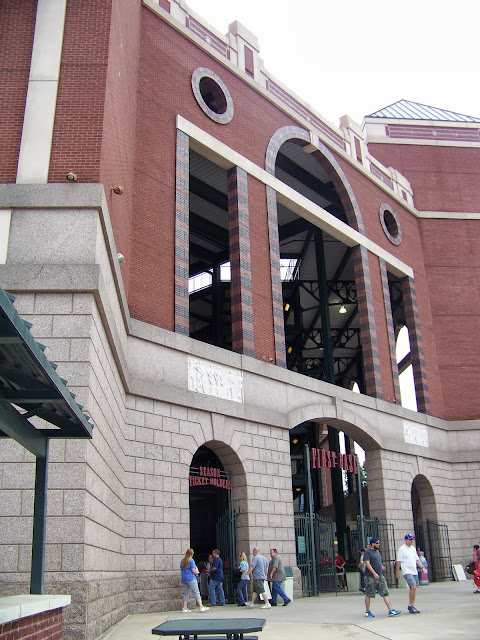 When I brought up the idea of going to a Rangers game to my Girls' Night Out group, the Rangers were still in the race to win the AL West.

Then, most of September happened, and I was just glad that they were playing the Angels and I could boo Josh Hamilton. As much as anything, I had to go to at least one game at the ballpark this year because surprisingly, I had not been all season. We went to Houston for Opening Day, or I would have been at the beginning of the home season like usual.

However, the Rangers got on a hot streak and are playing game 163 tomorrow for a chance to play the Wild Card game and get into the playoffs.

The Wild Card game is not a real game in the minds of real fans. It's just a chance for a team to claim they were in the playoffs and for teams to sell more stuff. Once they get to play the ALDS, they can say they are in the playoffs, in my humble opinion. 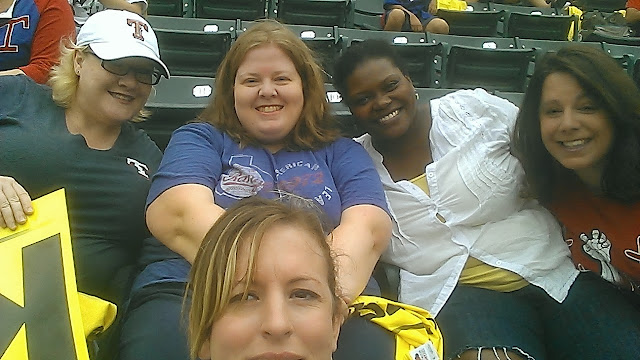 And right after we bought our tickets, Angie broke her leg and couldn't go. Thankfully, Courtney was able to join us.

The game was set for 7:05 PM, but got moved to 11:05 AM in anticipation of rain and storms later in the day. It's a good thing they moved it because of how it rained in the 9th inning and the rest of the afternoon/evening. Truth be told, it was raining in the first inning.

It was bad for my sleeping in on a Saturday though. I had to set an alarm to get up and go to the game.

On the way up, I heard Hamilton wasn't even in the line-up which disappointed me since I couldn't boo him. He did make it into the game to pinch hit in the 9th, but we had left the stands because it was pouring. So, I had to boo from the concourse after I figured out what was going on.


As Rakia said, all we needed was a drop to 20 degrees to have every possible weather condition. When we arrived, it was so steamy that I could feel my hair curling. Then it sprinkled rain. Then it rained. Then the breeze blew and felt good. Then the sun came straight out for 15 minutes at 90+ degrees and burned my arms. Then you could tell a monsoon was coming. Then it poured.

We waited out the rain before fleeing the stadium. It rained on me most of the way home.

However, the Rangers won, we had a good time together and it was a great day. Even if we were sweaty and wet from being rained on and ready for hot showers by the time it was all said and done.